Traversing 13 countries and 2 continents over 87 days, Naresh Kumar rode his tandem bike from Chennai, India to Hamberg, Germany, picking up friends and 180 strangers along the way to help him complete the 5,500-mile journey, which has just been recognized by both the International Book of Records and the Indian Book of Records. The mission was to raise awareness and funds to help the victims of bonded labor slavery in South India. After founding the Freedom Seat Foundation to bring about the rescue and rehabilitation of women and children from modern slavery, Kumar now works closely with charities in other parts of the world as well. (Listen to the podcast episode on iTunes).

Thematically speaking, Kumar’s vast adventures expose the duality of the human spirit by illustrating the incredible hospitality that people extend his way at times when he is most vulnerable and in need of shelter and food, while at the same time unveiling the horrors that are happening around the world in regards to the widespread mistreatment of vulnerable people, including children.

According to the United Nations Labor Organization, over 40 million people around the globe are trapped in modern slavery working conditions and forced marriage. Over five million people are the victim of sexual exploitation. One million of those victims are children.

“Justice has to be served.”

According to Kumar, “there are several dimensions to attacking this issue. The first thing is prevention – educating the people not to fall for these traps in the first place. Then there is prosecution – working with law enforcement because justice has to be served. The next stage is rehabilitating people from the years of trauma they had to endure. And the most important is empowerment – making people human again by empowering them with skills to set up a business and learn to live on their own feet.”

The tandem bike allows passengers to help Kumar out with his larger goal of raising awareness of human trafficking, in addition to helping him on his way to his destination, but deeper than that, it also gives the passenger an experiential window into the loss of control felt by the victims of human trafficking. “When you ride tandem for the first time, you feel sheer fear over having no control over this machine that is balanced on two wheels. I couldn’t go where I wanted to go. I couldn’t stop when I want to stop. And I’m truly trusting the random person who was riding the bike in the front. Losing that sense of freedom was scary. Without freedom, you are not even a human.”

In spreading his message with others, Kumar has curiosity on his side. “The most important thing is curiosity. Imagine seeing this guy riding a tandem by himself. There’s no one sitting in the backseat, but he’s fully loaded with a pannier, a front bag, a tent and sleeping bag, extra water bottles. People want to know what’s going on. Who is this boy? Why is he riding a tandem by himself? Why is the seat empty?… And 90% of the time they assume that my girlfriend broke up with me and that’s why I’m riding the bike all by myself.”

By making himself vulnerable out on the road and sharing his mission, Kumar finds that the perfect strangers he meets are willing to open up when he asks them to share their own stories. “They always made themselves extremely vulnerable and tell me deep secrets, the negatives and the positives that made them the person that they are today and they are proud of what they have become.”

Read next on TOJ: A trail runner and endurance athlete’s take on heartbreak, and how he copes when the going gets tough. By Naresh Kumar

“Without freedom, you are not even a human.”

After working hard to establish agency in his own life, Kumar has become passionate about the disparate power structure that allows so many to be taken advantage of and forced to live a life of slave labor. “People are taking advantage of others in vulnerable positions for their own benefit, and sometimes for their evil desires, especially when it’s done to the most vulnerable – women and children – it’s just bad. How can we be talking about technological advancements like shooting to Mars while there is still slavery where a person is getting paid a dollar for one hundred hours of hard work under the sun making bricks? That needs to definitely change.”

Kumar worked diligently to help raise his family out of a poverty-stricken area of northern Chennai, India, earning a scholarship to Madras University and eventually working as a software engineer in Silicon Valley. “Even in Chennai, if you tell anyone that you grew up in North Chennai, people look down at you like a third-class citizen – pretty rough neighborhood, rough childhood. You know that education is your only escape from poverty. That’s your only passport.” 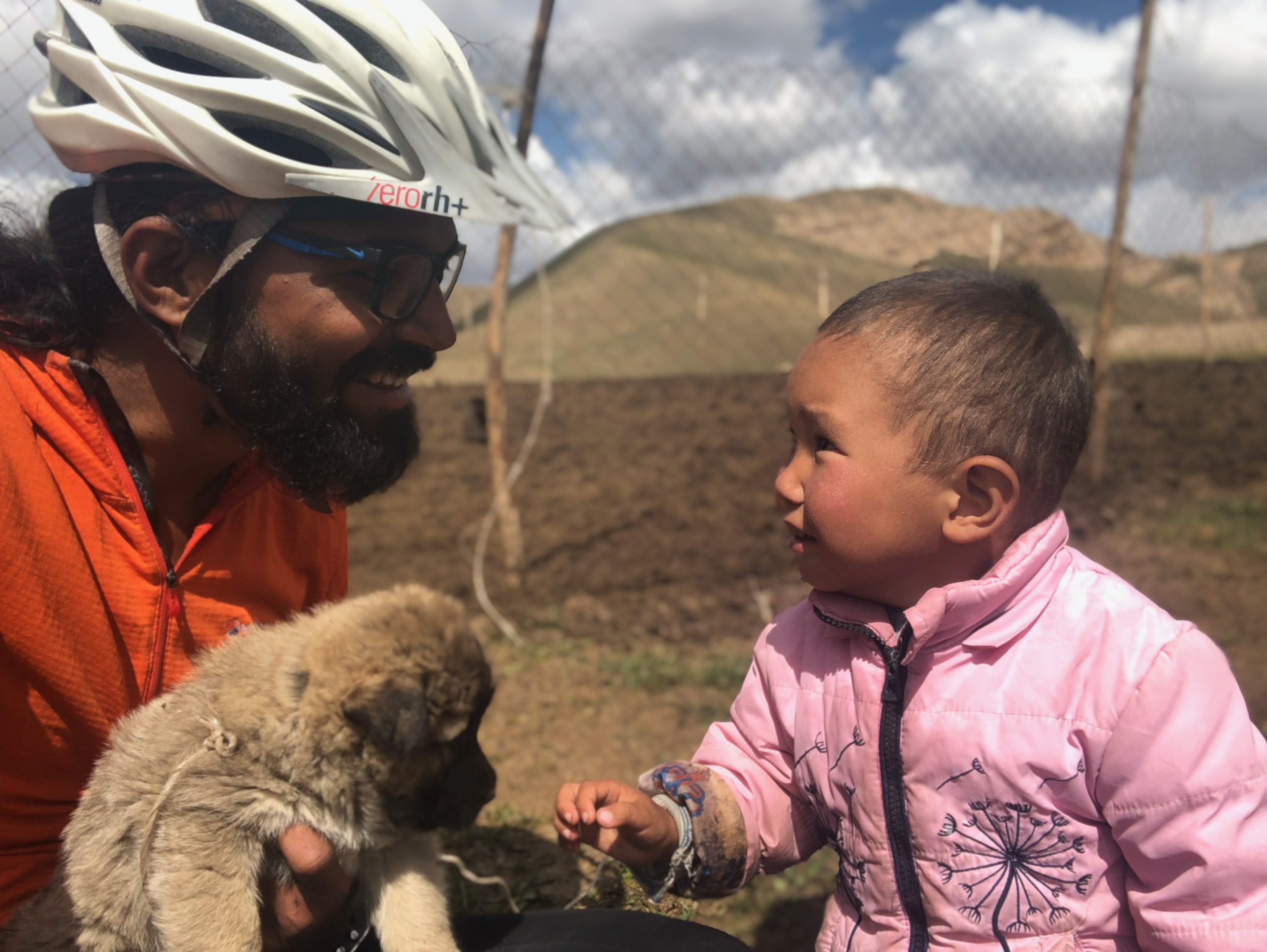 Many men in India dream of working in the states and earning a living in US dollars. Kumar sacrificed so much to get there, including missing important family events like the birth of his nephew. And, after all, Kumar only knew about one thing – computers. How could he give it all up for a life of uncertainty? Despite his fears, Kumar left behind his comfortable life in San Francisco, and his hard-earned opportunity to work in the US, to push himself further. After his tandem mission was complete, Kumar sought out a solitary challenge in the mountains of Kyrgyzstan.

“You have to leave somewhere to go somewhere.”

Overcoming a thrashed tire, Naresh became the first Indian to complete the Silk Road Mountain Race, the world’s toughest mountain bike race known for its extremely rugged terrains and grueling rainy conditions. On this 1,000 mile, fully self-supported bicycle race grinding over 9,000 feet of total vertical gain (that’s three times more than Everest), some of the passes were so remote that it would have taken days for emergency rescue to reach him. Kumar managed to finish the race in 12 days by packing only the essentials and deciding to only wear one pair of clothes. He finished 31st out of 46 finishers. The rest of the 140 participants flew home with a DNF. “When I got to the finish line, all I could think was, ‘I shouldn’t even be here.’” After keeping his head tuned into race mode for hours and days, Kumar started interacting with the locals. “The Kyrgyzstan people really are something, especially the nomadic people settled in the mountains. They go above and beyond to make sure you are taken care of by giving everything they have. It restores your faith in humanity and makes you feel that the world is still a very beautiful place.”

Solo expeditions are nothing new for Naresh. In 2015, he completed the Te Araroa trail across the entire length of New Zealand in an extremely minimalist style and sporting a pair of Jandals, a style of minimalist sandals. “I choose solo missions for the heightened sense of awareness because every single mistake is going to cost you in some way, and in the worst case, your life, but it also gives you a perfect solitude that you become addicted to after a couple of solo missions.”

In this episode of The Outdoor Journal Podcast, we discuss the duality of the human spirit, as displayed in the abundance of hospitality Naresh received on his journey juxtaposed with the cause, to end human slavery and human trafficking, how Kumar travels to remote ends of the Earth to find his absolute limits, and also how he learned to make himself vulnerable to truly connect with others. (Listen to the full conversation on iTunes).