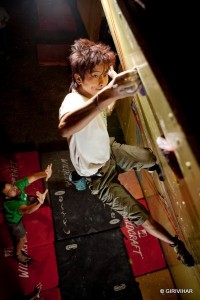 The Outdoor Journal Teaser: Behind The Scenes

After filming in five continents, our
cinematographic appetite was finally satiated.

Inside the Editors Studio, with a little bit of help from our green diet consisting of caffeine and scotch, shoveling through 150 hours of footage didn’t seem as arduous as we feared.

Our story begins at the “big wave beach” in Palawan. Editor-in-Chief Apoorva Prasad, along with his comrades, Lorenzo Fornari, Cedric Brac, and Fredric Bonnichon, celebrated their spring break by deviating from the social norm of being topless and drunk in Cancun. Instead, they chose to be topless and not so drunk while body boarding in the Philippines. In their spare time, they would snorkel with whale sharks in Donsol, and shoot their experiences as well.

Shortly after, Editorial Director Gaël Couturier joined the Editor-in-Chief in Arizona, USA. Gael participated in the Ironman Triathlon, while Apoorva filmed. The Ironman is a series of the most epic endurance events held all around the world, combining swimming 2.4 miles (3.86 km) swim, a 112-mile (180.25 km) bicycle ride and a 26.2-mile (42.2 km) marathon, done without a break in under 17 hours.

Twelve hours away by car, Editorial Assistant Himraj Soin and Honourary Advisor Mandip Soin were jumping out of a plane in Colorado. The tandem skydives were captured by the helmet cams of the zany, adrenaline-driven, kiwi instructors.

Let’s float down to Peru- our next adventure was caught on camera while kayaking in the Tambopata River of Peru, shot by Himraj Soin.

Now, we take a flight to France, where Apoorva and Gaël underwent “Hostile Zone Training”. It is aimed to help train journalists reporting from the world’s most dangerous places. Run by the French government, it takes place at the National Commando Training Centre.

A short flight to the east of Europe lands our Editor-in-Chief in the Garni Gorge of Armenia with Mkhitar Mkhitaryan, Agata Wlodarczyk, and Przemek Bucharowski. With their forces combined, traditional climbing stands no chance. Hanging off a rope, Apoorva films and climbs some quality trad.

Finally, The Outdoor Journal team reunites in India to continue the adventure. We find ourselves paragliding all over Himachal Pradesh and with over six cameras on a glider, we capture sick angles. After several launches and gut-wrenching aerobatic tricks, a good deal of paragliding footage is contributed to the eventual teaser.

We set no limit to awesomeness, so we decide we need something more. Naturally, we gather clips of Tine Mina, one of our contributors from Arunachal Pradesh, and incidentally, the first woman from Northeast India to climb Everest. Her clips are from an old camera, and provide a retro look, well approved by the hipsters of the editorial team.

Unsatisfied with the Delhi winter and still bitten by the travel bug, The Outdoor Journal team takes a trip to Gulmarg, Kashmir. Blessed with fresh, thick powder, the team shoots a week of gnarly skiing and snowboarding at 4000m. Whether it be piste or off-piste, we cover it all, have a ball, and leave for Delhi with a cavalry of clips.
After several cups of coffee (scotch), we bust out our best moments, and give to you, our final teaser. The World is Your Playground!