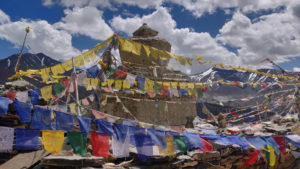 After the onset of the Northeast monsoon in the lower Himalayas, Peter Van Geit moves on to the high altitude rock desert of Ladakh in the Jammu and Kashmir region.

In this third installment of Peter Van Geit’s ultra-running field notes from the Himalaya in as many months, Peter has nearly reached his goal to navigate more than 120 high-altitude passes in his self-supported, minimalist style. 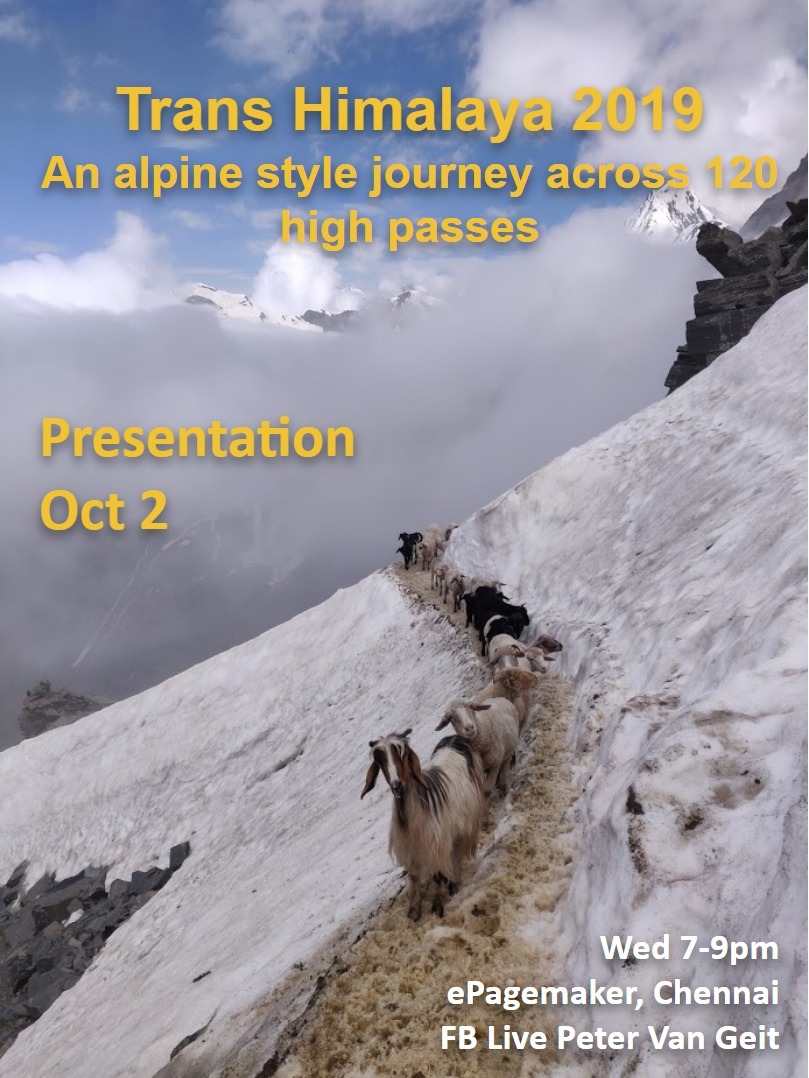 You can watch Peter speak live about his incredible journey on October 2nd via Facebook live and you can also download the presentation notes here.

We are now three months into the journey with 83 passes explored reaching 6,200 m and covering 2,100 km, with a total elevation gain of 120 thousand meters. The journey has consisted of many long 12 hour days, sometimes covering up to 50 kilometers in a single day and 2,000 meters elevation gain across treacherous terrain, including glaciers, moraines, loose scree, deep snow, dangerous stream crossings, and steep ice slopes. By mid-July, most of the snow had melted below 5,000 meters, making it easier to traverse high passes.

Ladakh is a vast, barren world covering a large area of the Himalaya between Kashmir, Tibet and Lahaul. The average altitude is around 4,000 meters with 5,000 m passes between the 6,000 m high peaks. We’re challenged with larger distances to cover, less oxygen and intense UV at these higher altitudes.

As you explore this entirely different world, you get immersed in the unearthly rock formations, the unusual textures and colors of the mountains, the glacial streams cutting deep canyons and gorges and the beautiful hidden fertile valleys with bustling ecosystems of their own.

Ladakh is a desolate desert landscape which has surprisingly rich biodiversity including wildlife and invaluable treasure of medicinal alpine flowers. Once you explore the interior valleys and canyons, you discover hidden green oases with rich flora and fauna. Glacier and snow meltwater flowing down the valleys gives life to a bustling ecosystem with grass, bushes, insects, and birds during summer.

Read next on The Outdoor Journal: The first mountain biking competition in Ladakh is a symbol for the youth culture to ride big and dream bigger.

Some hiking routes are impossible during early summer when more meltwater causes dangerous stream currents in some valleys and canyons. Due to this, I had to reschedule some of the passes in my initial planned journey.

Ladakh has many interior villages and small hamlets surrounded by lush green farmlands fed by meltwater from streams. Stupas and piles of mani stones mark the boundaries of these habitats. The government is making a serious effort to connect many villages by road and provide electricity. However, most youngsters leave the hardships of these villages for a better life in the cities, thereby leaving a declining population of elder people behind. Villages are completely cut off from the world during winter due to heavy snowfall. With no firewood available, people cook using cattle dung.

Ladakh has a vast array of trekking routes and is a popular destination among European hikers. Most people hire a guide and horses to carry their (comfort) luggage. Others follow the routes along the many homestays through the villages which provide food and a night’s stay. You also meet a few alpine-style hikers navigating their own way but most are loaded with heavy backpacks. No one seems to go solo, minimalist or at ultra pace. Most routes are marked clearly with cairns (piles of stones) and it’s easy to follow the horse poop. Passes are marked with colorful Tibetan prayer flags and Ibex skulls. As a popular hiking destination, many routes and passes are marked on Open Street Maps and the Swiss Olyzane hiking map series of Ladakh.

Unlike Uttarakhand or Himachal where people speak only Hindi, most native Ladakhis master English well, making route inquiry easy. Communication with the outside world is mostly impossible due to the absence of any mobile networks except in very few major cities. Fortunately, my solar power gear enabled me to recharge my phone for navigation in many villages where electricity is absent.

Clear drinking water is available everywhere through smaller streams which channel meltwater to the main valleys. You can also fill your bottle with snow and shake it to melt it. There are a few edible plants which make a good backup if you run out of food.

I covered around 30 passes in central Ladakh around the Hemis national park between the Indus and Zanskar rivers. Next, I’m planning to cross over and explore the interior mountains between Zanskar and Lahaul as well as some interior valleys of Hemis after meltwater has reduced in the streams.

Read next on The Outdoor Journal: Field Notes: Solo Ultra-Running the High Himalaya

One memorable experience from my journey was the crossing of the Kang La (5,500 m), one of the largest glaciers in this part of the Himalaya, connecting Lahaul and Zanskar. It required traversing large sections of moraines, a 20 km crevassed glacier and walking through deep, soft snow. Although it’s usually completed in eight days by the average hiker supported by a guide and horses, I crossed over in 2 days solo. Camping minimalist at 5,000 m altitude on the snow-covered glacier was a unique experience. Another highlight in the journey was the summit of the Stok Kangri peak (6,200 m). This required waking up at midnight when the snow is frozen hard and climbing up 1,300 m in 5 hours from the basecamp to view sunrise above the Hemis national park. The final section is a steep ridge below the summit where hikers use crampons and ropes. Being minimalist, I had no technical gear with me but I managed with my ice axe. Views from the peak were stunning and will be edged in my memory for a lifetime.

Yet another memorable experience was the visit to the 1,000-year-old gompa or monastery of Sumda Chungun, a remote interior village. The 11th-century gompa spots two large Buddha statues, beautiful 3D carved walls and ancient wall paintings and Tibetan prayer scrolls. It’s amazing to see such a rich history hidden deep inside these remote, inaccessible mountains.

Stay tuned on The Outdoor Journal for Peter’s next update along his 2,500 km journey. Click here for more gorgeous photos captured by Peter.

All images by Peter Van Geit using a OnePlus camera.