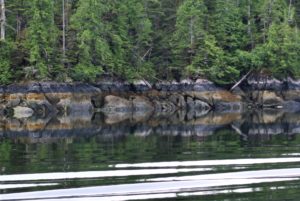 A Flotilla Cruise Through The Inside Passage: From Alaska to BC.

Shortly after 9 AM, the mist over Ketchikan Marina lifted. The crews of our six motor launches fired the twin diesel engines, loosened mooring lines and coordinated radios as anticipation escalated. One by one the Grand Banks cruisers eased out of the close quarters and bustle of the working fishing port and rallied in the main channel. Our flotilla passed two 10-story cruise ships as we motored southeast. Other maritime facilities, including the Coast Guard station, appeared to port. And then, as though walking through a bulkhead from inside to outdoors, we left urban development behind. We were on our way!

We were offered the chance to join long-time sailing friends, Dave and Janet, for a 10-day, 450-mile voyage through the Inside Passage from Southeast Alaska into British Columbia. Although we had sailed in Desolation and Puget Sounds, motor cruising through the stunning fjords, inlets and channels of the coastal Northwest promised an exciting new adventure. Coupled with the rich marine life of pristine waters, and the opportunity to visit a Kitasloo community, a life-changing voyage unfolded.

As though walking through a bulkhead from inside to outdoors, we left urban development behind.

With Dave as captain, the four of us crewed Thea, one of six boats forming a flotilla led by NW Explorations. (NWE) She was moored among boats of all descriptions. Large commercial fishing operations were mixed with day charters, amid all the sights, sounds and smells of an active marina. We took possession of our new home with a launch due the next morning. Berths secured, personal gear stored and provisions on board for the first days, we bedded down for an anxious night. Compatriots hailed from Florida, Arkansas, Wyoming, California, Washington and Oregon.

Thea, a Grand Banks classic yacht, was well-equipped for cruising wilderness waters. Designed like a 46-foot trawler, she carried an impressive array of navigational equipment, including GPS guided autopilot, lap-top displayed depth and distance charts and radar. Featuring twin-engine diesel motors, she was most efficient at about 8 knots. There were three berths, two heads, a well-appointed galley with fridge and freezer, an ice maker and microwave, washer and dryer, with a drop-leaf teak table in the adjacent salon. All-in-all, quite commodious accommodations.

“turn where we turn, not when we turn…”

With Deception leading the way, and other flotilla members spreading out behind her, our course was set: Foggy Bay, 38 nautical miles away. Salt spray, the call of seabirds, rugged forest coastlines scalloped by tides and winds heralded entry into the Inside Passage. When a change in course was needed, we received the admonition: “turn where we turn and not when we turn”.

By midafternoon we manoeuvred into Foggy Bay, located at the end of a small inlet, a charming pocket anchorage no more than 1000 feet across. Despite its name, sunny skies welcomed us. To arrange for an inter-boat gathering and accommodate the tight mooring, we rafted the six boats side by side. Three anchors and three stern lines kept us in formation. After assembling for hors d’oeuvres in Deception’s salon, sea stories began. Roland Barth’s Cruising Rules applied to food and tales.

Good weather prevailed the next morning out of Foggy Bay, in route to Prince Rupert, the largest city in the northern part of British Columbia. Several bald eagles monitored our entry into Cow Bay Marina.

Our itinerary called for a layover day, to allow provisioning for as many as seven days. The refrigerator had unaccountably shrunk, so we pressed two on-board coolers into service. With the help of block ice and a steady stream of cubes from the icemaker, food stayed fresh for the remainder of the trip.

Returning to Thea the second afternoon, we encountered a boat hand with three large bags of shrimp. He pointed out their boat, docked on the next boardwalk. The captain sold us enough for three meals.

Because Prince Rupert has both rail and highway access to the interior of British Columbia, it is an important shipping hub. The marina is the largest between Ketchikan and Vancouver Island and provides shore power, potable water, Internet access, a restaurant/pub and a large grocery store within walking distance. Its laid-back pace fit our needs exactly.

The sights and pounding reverberating across the waves cast indelible memories.

Rested and fully provisioned, we set our course over the next four days for passage to Newcomb Harbour, then to Patterson Inlet, Bishop Bay and on to Aaltanhash Inlet, a total of about 185 nautical miles. Our itinerary brought us down the narrow Petrel Channel and then across various sounds and reaches. We saw virtually no one except when we crossed the shipping lane at Granville Channel and a few boats moored at Bishop Bay.

The narrow passages into these inlets are quite protected, with tide changes, but little surge. Reflections along the water line strike vivid angles on the glassy surface.

Early mornings in these anchorages were magical. Overcast skies meant light emerged slowly, coupled with the first cries of sea birds, and the salmons’ leaps and jumps as they pursued their spawning destiny. Hot coffee cups warmed our hands each morning as we sat on Thea’s bow; remote did not mean sacrifice. Fishing was irresistible and often rewarding.

One sunrise a tall, black timber wolf scampered out dense forest onto a low tidal beach, nose down looking for treats then up again skyward. We held our breath, hoping for more, as it disappeared a moment into large reeds. Then out again, it retraced its path into the trees. This rare sighting happened in a flash before we had time to nab the camera. Within two minutes, silence settled in again, we caught our breath, and the usual world was far away.

Soon after leaving Patterson Inlet we crossed through Otter Passage and into Squally Channel. Our flotilla came upon a pod of feeding humpback whales. We slowed to idle and spread out, maintaining a respectful distance. The whales were fishing by concussing, slamming either their pectoral fins or massive tails on the surface, stunning the small fry below. The sights and pounding reverberating across the waves cast an indelible memory.

Then, without warning, two whales seemingly the size of Thea surfaced next to us, almost within reach.

Apparently unconcerned about our proximity, with the sweep of a fluke, they are gone.

Out from our snug mooring at Aaltanhash Inlet, we set our course down the Princess Royal Channel toward our rendezvous with the Kitasloo village of Klemtu. Deception reported a small school of Dall’s porpoises feeding along the port side. As Thea came forward, several swam over to investigate.  Incredibly, they fell in with our bow, matching our speed of about 9 knots, crossing from one side to the other. Then, in a flash, they lost interest and were gone.

Shortly beyond, Klemtu came in view on the western hillside. We passed the community and made anchor in a small bay called Clothes Cove. We took the dinghies back to the village where we were given a tour of their magnificent Long House by Shane, a hereditary chief. Ceremonial uses were heralded by the lightly acrid smoke in the air. Built with massive cedar beams, its spectacular carved lintels at each end represent the four families of this Kitasloo village: eagle, raven, killer whale and wolf.

Since at least the retreat of the last ice age, indigenous peoples have lived, fished and hunted in the stunning, rich waters and islands of what is now southeast Alaska and the Pacific coast of British Columbia. The arrival in mid-1700s of Spanish, English, and Russian explorers brought deadly disease, slavery, and overt debasement of their cultures. The Canadian government later established residential schools, for which students were forcibly removed from their families and beaten if they spoke their native languages. Today Klemtu’s 450 residents struggle to regain lost cultural sovereignty. With a determination steeled by centuries of survival in an often-harsh environment, the people of the village persevere.

By the next morning, several boats were running low on provisions and fuel, so our destination changed to Shearwater, about 38 miles distant. Here we found the only large boat haul-out facility in a wide area. Its pub restaurant brought a break from on-board meal preparation and clean up. Fussy kingfishers patrolled the marina. After dark, a full moon, bright enough to walk by, cast mirrored reflections on the water and forest silhouettes against the horizon.

Not long after we departed Shearwater, a large raft of sea otters appeared. Mothers sometimes wrapped their young in floating kelp beds, leaving them on the surface while they dove for food. Sea otters were hunted almost to extinction during decades of high demand for their pelts. While their numbers have rebounded across two-thirds of their historic range, they have not returned to their earlier abundance.

As we prepared to leave Shearwater, the Deception crew advised that weather was building ahead of us, over Queen Charlotte Sound, to our southwest. Our course would take us down the Fitz-Hugh Sound, still protected by an outer island, but then out into the open Sound, directly off the Pacific. The likely rough seas prompted a change in plan, to turn southeast into Queen Charlotte Strait, and Blunden Harbour, 83 miles and 10 hours away.

As we entered the Sound, winds held steady at 20 knots, Thea bounced and tossed in four-foot swells and scattered squalls. Though the boat was well-designed for rougher seas, the open passage required our constant attention. In gathering darkness, the flotilla eased out of the strait and into the anchorage. After a quick meal, we called it a day and thanked the star-filled sky.

The next morning brought our last day on the water. Our destination, Port McNeill, British Columbia, was now nearby after yesterday’s long run. We left Thea, and Dave and Janet, as three new passengers were set to embark on the next 10 days down to Bellingham, Washington.

Returning home, we were refreshed by memories of marine life seen up close in native surroundings, stunning fjords cut into the pristine forest and First Nation resilience and renewal. Great fellowship, discoveries every day, gourmet meals and more. It was truly a trip of a lifetime.