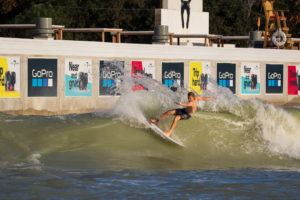 An Inside Look at Texas’s Budding Surf Paradise

The surfing taking place in Texas is obviously not the totally radical ocean surfing that you’ve seen on your Instagram feed, but inland surfing in man-made pools with machine powered waves.

Texas has not historically been a sought-after destination for surfers. As a state that sits about equidistantly far from the Atlantic and Pacific Oceans, waves are not exactly easy to come by

However, recently Texas has been getting put on the map for a new demographic of visitors from not just around the country, but the globe. It’s not the rodeos, barbecues, or country music that is drawing the new-found attention. It’s the surfing.

Over the past half-decade there has been an intensified technology race to strike it rich by building the world’s latest and greatest artificial wave. Different types of technology to create the perfect, repeatable wave have been popping up all over the globe from Spain to Australia to California. In 2015, the GOAT of surfing Kelly Slater shocked the world with a perfect right hander built in California’s ocean-less Central Valley. Then, when everyone thought that Slater could not be topped, Hawaiian surfer Seth Moniz appeared on the internet doing a backflip-ish type aerial in a pool in Waco, Texas. After the dust had settled from Moniz’s backflip heard ’round the world, surfers were left asking themselves: Where the hell is Waco?

It appeared that Kelly Slater’s wave had met its match.

As cool as it was that Kelly Slater’s pool was essentially in our backyard here in California, just a little road trip up the I-5, it’s not open to the masses.

Ever since its emergence into the public eye, the only people that have surfed Slater’s pool are pro surfers, friends of pro surfers, VIPs, or those who can shell out the thousands of dollars required to book a session. Average surfers like me with a thin wallet don’t stand a chance. However, when Waco’s pool was unveiled, it caught the attention of the masses, all the way from beginners to average joes to pros. Waco’s technology is built to create shorter, but more frequent waves — as opposed to Slater’s very long wave once every four to five-ish minutes.

In Waco, groups of people can surf the wave all at once, and for the price of $90+ tax you can be one of those lucky surfers for an hour. It’s not what I would describe as cheap, but definitely accessible for the non-aristocratic surfers looking to get barreled in freshwater.

When I was invited out to Dallas, Texas on a family trip with my girlfriend, I knew I couldn’t pass up on a chance to surf the pool in Waco just a two-hour drive to the south. I coordinated my trip with a friend who lives in Austin, and booked a one-hour session to give inland surfing in Texas a try for myself.

I had seen enough videos online to have a pretty good idea of what to expect at the pool, but seeing surfable waves breaking in swimming pools still hasn’t lost its novelty feel for me yet.

I strolled along the poolside with my surfboard bag hanging from my shoulder, my eyes glued on the waves peeling across the pool. I sat in a beach chair with my feet planted on the imported sand and studied the waves before I would get my one-hour window to surf. Finally, the clock struck 6pm and it was my turn to get in the water.

The pool lets in nine people at a time, forming three groups of three. The waves come out in three-wave sets, so each group gets a set and then gets back in line for their next turn.

Our group of nine featured what I would consider a bunch of average joe surfers. Most seemed to be visiting from California, while there also was a more novice surfer from New York and a homegrown Texan employee of the pool who was picking off the waves that people fell on.

We started off with the right, a wave that breaks from right to left if you are looking at it from the shore.

From behind the concrete wall a machine starts to make a muffled rumble, indicating that you need to get ready for what is to emerge from the depths. Suddenly, a large amount of water is displaced as you drop down below sea level in the pool. Out from under the wall a bump appears, seemingly small, but when acting upon the contour of the pool floor, a beautiful wave begins to break. Then another follows, and another, breaking about waist to chest high laterally down the pool.

There are nuanced, complicated, intriguing, and often ignorant avenues of discussion

I didn’t know what to expect on my first shot, but I took positioning advice from the Big Apple surfer and I stood up without a hitch. I might have gotten a little excited with the maneuvers that I was trying to perform off the bat, falling a few times here and there. The wave is predictable, but it has different phases of going from more sloping to steep and barreling. Knowing where to place and time your maneuvers is critical knowledge that I was doing my best to process on the fly.

Almost immediately, the first thing I noticed was the smiles and stoke permeating through all nine surfers in the pool. There was a palpable camaraderie between the surfers, which sadly enough was surprising for me, a surfer accustomed to the jam-packed, tension-filled lineups of California.

I suppose that when you don’t have to fight for waves, the true nature of surfing, and most surfers for that matter, emerges. You can focus on the fun and not hassling for waves or the grumpy, aggressive locals that unfortunately are an all-too-common stereotype in surfing.

Enjoying the good vibes in the pool, I had a great time trading off waves with strangers and surfing into the late evening hours of a scorching autumn day in Texas.

Of course, surfing the pool for the first time was more difficult than I imagined, but that was to be expected. I managed to do some satisfying turns, but many of my waves were learning experiences — getting used to a new wave takes time, let alone a freshwater wave that breaks along a cement wall.

Can pools coexist with the ocean?

My freshwater surfing experience in Waco was definitely a memorable day. Surfing 15-20 guaranteed, nicely shaped waves in an hour was well worth the $90 in my opinion.

If anything, it left me wanting more. Now that I have a little familiarity with the wave, I keep thinking about different approaches to take — how I would do a certain turn the next time, or where I would stall to get barreled.

In search of perfect waves, surfers around the globe now might have their sights set on Texas

There are mixed feelings about wave pools in the global surfing community, but the overall sentiment is largely positive. I am personally of the opinion that surfing in a pool will never replace surfing in the ocean, and while the average day in a pool is definitely better than the average day in the ocean, the best day in most pools will never rival the best day in the ocean. At least for now the accessible technology is still far from that point.

I do, however, believe that pool surfing will grow as a nice complement to ocean surfing. Those that aren’t so lucky to live on the coast or spooked by surging housing costs in California can still reach their dreams of surfing without immediate access to the ocean.

There are nuanced, complicated, intriguing, and often ignorant avenues of discussion that stem off the creation of wave pools that I must at least mention if writing an informed article on the topic. Those discussions include competitive surfing in pools, training in pools, the economic viability of developing and building surf parks, pool water quality, and the race to build the next best technology, but I won’t, and simply can’t, dive into those topics in this story because they could each be bible-length articles in their own right.

For me, the important takeaway was still that surfing perfect waves outside the ocean is no longer a dream, but a reality, and unsurprisingly, it’s just downright fun. There are millions of surfers around the world thinking the same thing as me, eager to jump in a pool themselves. For that reason, I don’t think this wave pool craze will end anytime soon.

It’s yet to be determined if the wave pool in Waco will withstand the test of time, but for the time-being, surfers will continue to be spotted at land-locked Texas airports, much to the confusion of airline staff and fellow passengers. It still sounds odd to say, and foreign to anyone who isn’t in the know, but instead of heading off to exotic lands like Hawaii, Costa Rica, or Fiji in search of perfect waves, surfers around the globe now might have their sights set on Texas for their next surf trip.

Photo credit: First photo is by Patrick Hamilton, the rest are by Madison Snively.

This article first appeared on the author’s website: www.evanquarnstrom.com.