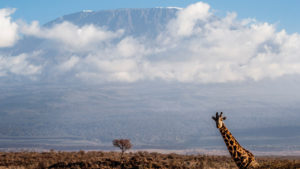 Climbing for a Cause: Returning to Kilimanjaro for Elephant Conservation

Sarah Kingdom returns to Kilimanjaro, not for the first time, but now with a team that are fighting for Elephants in Africa, that are under serious threat.

This wasn’t my first time up Kilimanjaro and it won’t be my last, but it was the first time I had climbed with a team so passionate about the cause they were climbing to raise funds for… elephant conservation.

One elephant killed every 15 minutes!

Elephants in Africa are under serious threat, primarily due to large-scale poaching for ivory and also as a result of conflicts arising from elephant / human interactions. It is estimated that 25,000 elephants are being killed in Africa every year… this works out at approximately one elephant killed every 15 minutes!

The driving force behind the group climbing Kilimanjaro with me this time was Bradd Johnston from The Askari Project. ‘Askari’ is the Swahili word for soldier, and a particularly appropriate word when used in connection to the current urgent need for elephant protection. Bradd, an Australian zookeeper, set up The Askari Project to raise funds to support elephant conservation, particularly the protection of some of the last Great Tuskers in Africa (an elephant with tusks reaching the ground is typically defined as a big tusker). The Askari Project supports the operations of The Tsavo Trust in Kenya.

142 arrests being made and 62 poached elephant tusks being recovered.

The Tsavo Trust is a Kenyan not-for-profit organisation which works with the Kenyan Wildlife Services. Since its inception in 2013, the Trust’s efforts have helped reduce elephant poaching in the project’s local area by 50%. Last year alone their plane flew over 700 hours, covering more than 52,000 miles, monitoring and patrolling the Tsavo area in Kenya. These efforts resulted in the recovery of more than 1,000 snares, numerous poacher campsites being located, 142 arrests being made and 62 poached elephant tusks being recovered.

The Askari Project Kilimanjaro Team were putting themselves to the test, lacing up their trekking boots and putting one foot in front of another to raise funds to support the conservation of African elephants.

Every year, over 35,000 people set foot in Tanzania specifically to climb Kilimanjaro. As the tallest free-standing mountain in the world, Mount Kilimanjaro is a place of myth and legend. Climbing this mountain may not require any technical skills or special equipment, however, the journey is not to be taken lightly, climbers need to be prepared and understand what lies ahead.

Many of the group had never trekked before and most had never climbed before. This was going to be a trip that took all of them out of their comfort zones and made them confront their personal inner strengths and weaknesses… after all the summit of Kilimanjaro at 5,895m above sea level, is not only the highest place in Africa, it is also one of the highest points in the world that can be reached without mountaineering equipment.

There are many routes up Kilimanjaro, but we had opted for the seven day Rongai Route as this was a route that would allow the group five days to acclimatise before their final assault on the summit.

Day one dawned and we set off for the mountain. After a fairly long drive, we finally reached the start of the Rongai Route. Our path wound through towering pine trees and the occasional colobus monkey was spotted. We walked at a slow pace up a steady slope, letting our legs get used to the idea of walking. The only way to tackle this mountain is inch by inch, unless, of course, you are one of the super fit porters who climb it a couple of times a month. We had 38 of these porters with us, and they speed past us with the group’s luggage, camping gear and water supplies balanced on their heads.

Reaching our first camp by afternoon, the group set about getting comfortable for their first night on the mountain. After dark, the temperatures on Kilimanjaro fall quickly. Our first ‘mountain dinner’ done, the entire group headed off to their respective tents for what would hopefully be a good night’s sleep. From my tent, I could hear them settling into their sleeping bags and getting used to the idea of camping life. I knew exactly the sort of thoughts going through their minds… “will I be warm enough or should I put on a pair of socks?”, “why didn’t I go to the loo before I got into my sleeping bag?”, “where did I leave the torch?… finally the rustling and fidgeting stopped and the group settled down to sleep, serenaded by the sonorous snores of one of the group.

Day two and the team were greeted with sunshine and a small bowl of warm water to perform daily ablutions. Despite having slept pretty fitfully, all were in remarkably good spirits. After breakfast, we set off for an uneventful day’s journey to Camp Two. Night two in the tents and I can see the group are becoming more accustomed to the discomfort of tent life and working out various ‘coping mechanisms’.

Setting off day three, we head to Kikilewa Camp; a pretty steep climb and the pace slowed as people began feeling the effects of the increasing altitude. Having told them all this camp was my favourite and the most scenic, it was a bit disappointing to see heavy mist roll in, hiding the view and blanketing the camp in clouds right up until departure time the next morning!

We reached our next camp, Mawenzi Tarn, by lunchtime the following day. In the afternoon, I dragged the team off, very much against their will, on a cold and damp acclimatisation ‘stroll’ up in the hills behind the camp, promising them a spectacular view of Kilimanjaro and the route we would be taking the following day. Sadly though the clouds once again refused to cooperate and having trudged for an hour up the hills there wasn’t a glimpse of the mountain to be seen at all!

oxygen deprivation for a number of the group really kicks in.

Day five dawns; we have a long day ahead of us, we need to reach base camp, at Kibo Huts, as early as possible in order to ‘rest up’, because, just before midnight tonight, we will set off for the summit. After a relatively short, undulating walk across moorland, we have a long haul across the ‘saddle’, the flat, barren, desolate area between Mawenzi and the Kibo crater. The path to the summit is clearly visible and, for many of the group, it appears terrifyingly vertical… reality starts to set in. The last hour of the walk is a relentless slog as oxygen deprivation for a number of the group really kicks in.

Arriving at Kibo base camp in time for lunch and a summit briefing, everyone is a little subdued. Lunch, a nap, a light dinner, another nap (or at least some fitful snoozing!) then at 11pm it is time to wake up. This is it…

A cup of tea and a few biscuits later, I line them all up for a few last minute instructions and then we are off, at midnight, up a zigzagging route on the slippery shale slope.

In the dark, with only our head torches lighting the way, I can hear rasping breaths all around me. It’s a crisp clear night, the stars seem very close and the moon is full. It takes a while for the group to get into ‘climbing mode’; heads down, focusing on the feet of the person in front, not looking up, down or sideways. The cold bites hard, temperatures are around -10deg C. All around I can see the head torches of other climbing groups strung out along the trail like fairy lights.

Plodding on for what will ultimately be nearly eight hours, the team finally reached the top. Unfurling the banners they have brought with them, they pose for photographs to prove they have conquered the mountain and, quite literally, have the world at their feet! Everyone savours the moment. I’m sure they all felt it was hellish at times, and their bodies certainly took a hammering, but they are have achieved what they set out to do and raised both awareness and funds for the future of the continent’s elephants.

2019 will see a team from The Askari Project climbing Kilimanjaro again to raise funds for elephant conservation. This time they will be accompanied by renowned wildlife photographer, Bobby-Jo Vial and will be joining forces Kope Lion (www.kopelion.org), who strive to foster human-lion coexistence in the Ngorongoro Conservation Area. , where intensifying human-wildlife conflict has been tough on the lions and where in the past few decades lions have begun to disappear from their former ranges separating the famous Ngorongoro Crater lions from the Serengeti.

The future of wildlife is in our hands. Their survival depends on generous supporters, so please assist these projects, however, whenever and wherever you can…If you would like to join the 2019 Kilimanjaro climb to raise funds for The Askari Project and Kope Lion please contact info@theaskariproject.org

For more information about or to donate to the projects supported by the Askari Project’s Kilimanjaro expedition please visit:

The Askari Project, The Tsavo Trust, and Kope Lion.