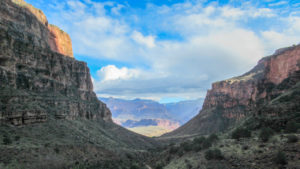 Travel Blog: A First Taste of the Grand Canyon

A 2 day geologic trip through Earth's past, via a descent into the mile-deep Grand Canyon.

Descending into the Grand Canyon is a walk through the history of planet Earth. Every inch of the valley wall tells a story of vastly different environments. Staring at the rocks at the valley floor is peering 1.8 billion years into the planet’s past, back to a time long before even multicellular organisms existed.

Even for those who aren’t as overly enthusiastic about rocks as I am, the Grand Canyon is quite the sight. The brain has a tough time comprehending the vastness that lies before you when peeking over the canyon’s edge. The Grand Canyon ranges 277 miles and I only saw a small portion of it. It’s big and definitely can’t be remotely explored in one trip.

I had been trying to plan a trip to the Grand Canyon ever since college, but for various reasons I was never able to make it happen. I wanted to do it right and backpack, but the permit process and my work/school schedule prevented that from ever happening. Finally, years later, enough was enough. I had to go to the Grand Canyon. People travel half way around the world just to see it, and I couldn’t hop in my car for an 8-hour drive from San Diego? 1I took a day off work to make an artificial long weekend and hopped in my trusty Nissan with Madison to experience the Grand Canyon for my first time.

We arrived at the Grand Canyon National Park just after midnight in pelting rain. Not keen on setting up a tent in the rain after the long drive, we opted to recline the seats and sleep in the car.

For our first day we thought it would make sense to do a “warm up” hike to get the blood going. We woke up, turned on the car, blasted the heater and headed to Grandview Point on the south rim. Our destination was Horseshoe Mesa — a plateau about 2,000 feet below the canyon rim with a protruding, semicircle mesa resembling a horseshoe, hence the name. We took our sweet time making breakfast and taking frequent breaks along the hike to take in the views.

The rim at Grandview was enclosed in a fog bank, so we had little to no idea what lay before us until we descended a few hundred feet and the immense valley walls first made themselves known. The seemingly easy distance and elevation gain turned out to be much more difficult due to the trail conditions. Much of the steep part of the trail was on cobblestone or wedged rocks, making footing more critical and climbing more strenuous. That said, in the grand scheme of things the hike was not too strenuous as per my standards. We made for a narrow peninsula of land that sticks out from the plateau and intermittently napped and ate lunch with a spectacular view of the canyon at our feet.

We saved the tougher of the two hikes for our second (and final) day at the Grand Canyon. We figured we would be more rested after a full night’s sleep.

There are signs everywhere, both physically on the trail and online, saying to not hike to the river and back in one day. I wanted to hike all the way to the river and back to feel like I had truly experienced the Grand Canyon, but I deferred to the warnings and settled for the destination of Plateau Point, which was a second best option, about 1,000 feet above the river.

What on paper seemed like a tougher hike actually ended up being easier than I expected. The well-worn, dirt trails and various water spigots made for fast, light hiking. We made such good time that next time, weather permitting, I definitely would hike all the way down to the river.

The Bright Angel Trail, unlike the Grandview Trail, is one of the high-traffic trails in the park. The views of the canyon were probably slightly better, but solitude was tough to come by. The deeper in the canyon you go, the relatively more serious the hiker that you will come across, but on the way back up, as you get closer to the top, the brand of hiker gets a little more obnoxious. You get everything from the loud eighth grade class field trips to elegantly dressed foreigners, and of course those real smart tourists that like to test their luck on the cliff edges. Still, the crowds did not rival what I have seen on my various trips to Yosemite, so I wasn’t bothered. People that are willing to hike long distances tend to be friendly, so there was mostly just smiles and ‘howdies’ on the trail. I did also jump into a funny conversation about Kanye West’s White House visit, which was sparked by an Obama supporter with a thick southern accent (don’t come across that every day).

The Grand Canyon certainly did live up to its name on my first trip. It was nice to see the canyon in person after having seen photos and movies, even views from airplanes. It truly is a world-renowned treasure that we have relatively in our backyard. Can’t take that for granted. I already have the itch to go back and complete the rim to river hike, or even do an overnight trip if I can attain a permit.

All photos by Maddison or Evan.

Evan Quarnstrom grew up in the quiet surf town of Santa Cruz, California, where unsurprisingly he developed a love for the ocean and nature. At 18, Evan headed for San Diego in pursuit of warmer weather and an education. Evan attended San Diego State University to study International Business, finishing of his degree off with a year-long study abroad program in Chile. Evan is now the Marketing and Media Manager at the International Surfing Association.