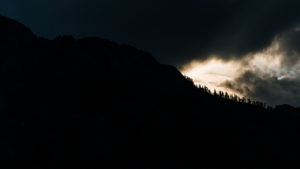 Hiking in the Tetons: When a Teenager Discovered the Power of Nature

As soon as we began ascending Wyoming’s Hoback Peak, black clouds appeared on the horizon. My family had only been camping for several days, but I’d come to expect the sky’s mid-afternoon mutation. The problem was, our guide had us climbing the region’s highest ridge, not traversing lower ground as we had on prior days when thunderstorms were a near-certainty. Every step up the mountain amplified our distance from clusters of trees, whose towering crowns and fallen trunks offered protection from direct and ground lightning.

“Should we turn back?” I asked my father. My lone ally on this treacherous vacation (our first and last llama trek) shrugged, “Not unless Loren pipes up.”

From the moment I met him, our guide Loren reminded me of a juvenile golden retriever refusing to be trained. His boundless energy betrayed naïveté, or was it something else?

We continued hiking upward. The higher we climbed, the closer we came to those ominous clouds, now enveloping the sky.

I was only fourteen—and a wispy sliver of a girl—but I never let age nor size get in my way. “Loren,” I shouted, “The storm’s coming. Shouldn’t we go back now?”

He paused for a moment, sniffing the charged air, and responded, “We’ll be fine. It’s not heading our way. Onward and upward!”

Within minutes rain began to fall, morphing into hail as lightning struck the apex of a nearby mountain, an alarming reminder that we trekked vulnerable terrain. Entirely exposed and the tallest objects in sight, we’d become mobile lightning rods.

To find cover, we needed to make our way to higher or lower ground, and I ascended more slowly than the others. In a pinch, they might be able to scramble to safe cover, but what if I couldn’t keep up?

The storm quickly escalated, and I knew that I had to descend even if it meant traveling alone.

“Loren,” I yelled into the wind, “Can we please turn around now?” to which he answered, “We have to get to higher ground to find cover. Follow me, everyone, and hurry!”

My mother and brother rushed after him. I tugged at my father’s shirt, begging him to retreat with me, and he acquiesced.

Without discussing the consequences, he relayed our decision to the rest of the group, urging everyone to join us, but Loren insisted that anyone able to continue to follow him to elevated turf, to more expansive tree cover than what we’d find below.

I’d already lowered myself to the ground, preparing to inch downhill like a crab. My dad rebuked then joined me. Two slithering bodies covered in mud, we ignored the painstaking switchbacks plodded the previous hour, reaching a nest of trees within minutes. We removed our packs and perched atop hefty logs; thunder, lightning, and behemoth hailstones raging all around us.

Then we held hands and prayed and waited for the storm to pass.

When it did, my father and I emerged to altered terrain. Tromping across icy slush, we spent a seeming eternity looking for camp. The llamas, our packhorses for the week, had scattered, and our tents were blown over, their contents dispersed like bits of city garbage.

We located the jittery animals and tied them to nearby trees before setting to work on our tents. These tasks afforded a momentary distraction from nagging questions: Were the others safe? Had we made the right decision? When would they come back, and what if they didn’t?

Suddenly, movement on the horizon. My Dad and I jogged up the banks of a mild ridge, peering into a vast post-storm haze. “Mom! Jeff!” I shrieked.

They shouted back, but with their calls came the distinct sound of laughter.

“It was no big deal,” Loren bragged minutes later as he wrenched off his jacket and mud-soaked boots, “We found cover in no time. You should’ve stuck with us.”

At the time, he seemed to be posturing—saving face—but over the years, my perception shifted: I no longer see doubt on Loren’s face. The man wasn’t merely a risk-taker—he was arrogant. He stared directly into the eye of a storm as though he were its equal match, as though his survival that day made him stronger than nature itself.