The Quirimbas Archipelago, rises from the depths of the Indian Ocean and stretches northwards from Pemba to Mozambique’s border with Tanzania. From the powdery white sands of Medjumbe Island to the ancient baobab trees of Quilálea and the mysterious Ibo Island, with a necklace of tiny islands in between. The archipelago boasts a remarkable diversity. Whales dive in the deep channels, dolphins cut through the water with amazing speed, turtles breed on isolated sandbanks and African fish eagles soar over mangrove swamps. 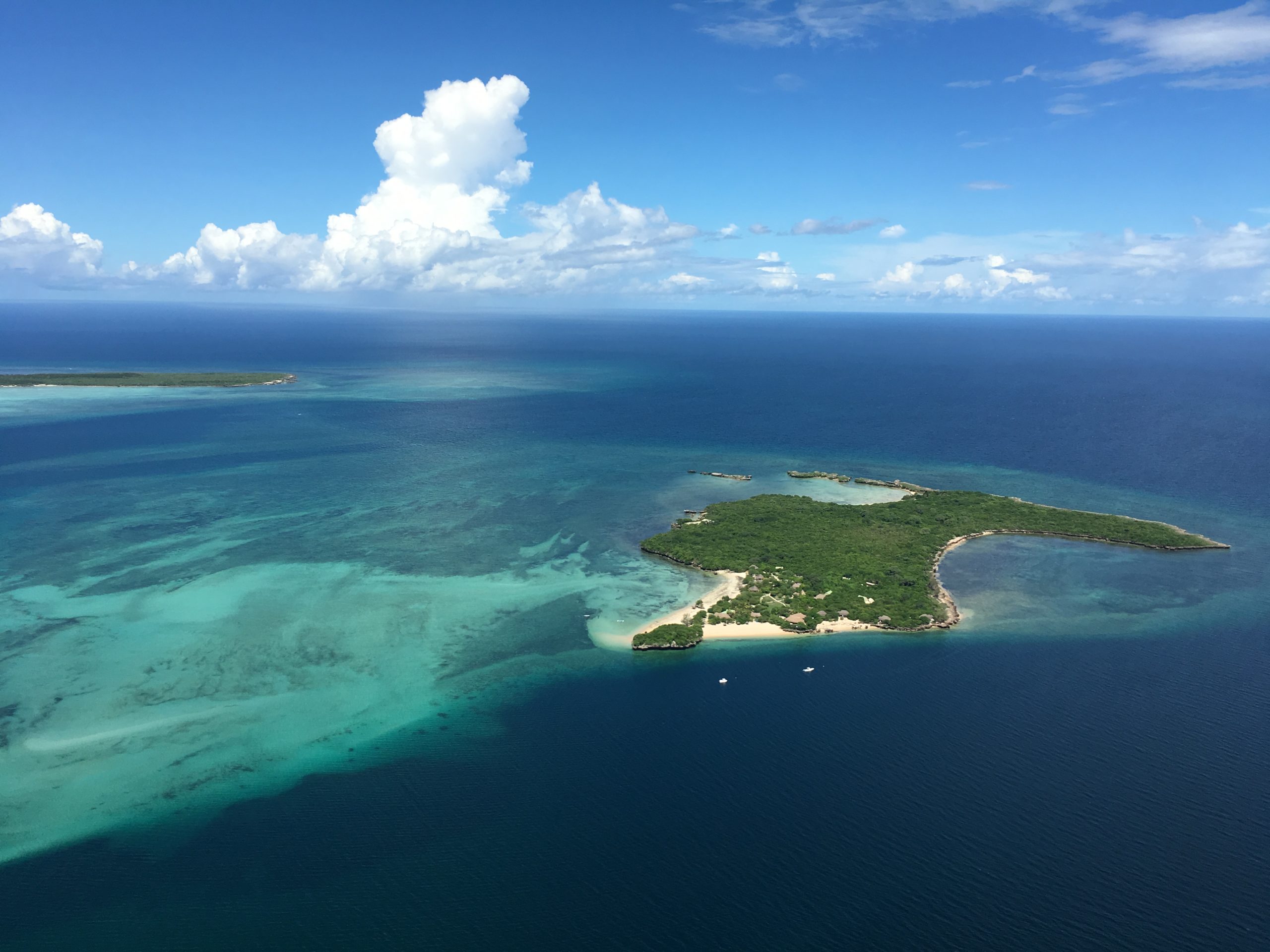 We landed to the humidity and barely controlled chaos of Pemba airport. A warm welcome from immigration was followed by an even warmer welcome, as we emerged from the airport and left the air-conditioning behind! A vendor attempted repeatedly and unsuccessfully to sell us a new sim card or airtime for our mobile phones, circling back seven times in as many minutes, refusing to believe that where we were going there would be no phone reception. Finally, our bus arrived and after a short ride to our hotel, we found ourselves sitting down to lunch in the beachside restaurant. Giant plates of prawns and calamari, accompanied by a glass of crisp white wine for me and a chilled Mozambican 2M beer for my husband, and we knew this was the beginning of a holiday in paradise.

Overlooking the deep waters of the Indian Ocean, Pemba is the gateway to the island gems of the Quirimbas Archipelago. Early the next morning we left Pemba behind to fly 40 min north to the tiny private island of Medjumbe. We flew over the tropical Indian Ocean coast. Gleaming white sandbars and turquoise translucent sea. An almost unbroken chain of coral islands, islets, reefs, baixos (the Portuguese term for sunken islands) and tiny shards of white sand. The shapes and colours were mesmerising. Land, fringed by mangroves and ringed by white sand reached out into the water so clear that you can almost see turtles, dolphins and fish below the surface. Below us, lonely fishermen cast nets and hand lines from dugouts and dhows with billowing, makeshift sails.

Barely a kilometre long and three hundred metres wide, Medjumbe Island, with its vivid white sand beaches, surrounded by achingly azure blue waters, is an unspoilt paradise. Sandpipers and pale pink crabs with oversized claws scurried along the beach. Egrets fished on the tidal sandbanks. Thousands of terns and gulls swooped out over the ocean. At the other end of the island, we found a tumbledown, abandoned lighthouse. At low tide we circumnavigated the island on foot, walking on sandy beaches and wading through shallow warm waters, stopping occasionally for a swim or to look at seashells.

Too soon though we had to tear ourselves away from Medjumbe and continue south on our island hopping adventure… our next port of call would be Ibo Island.

Ibo Island is a lost world on the edge of nowhere. The island is one of the most ancient settlements in Mozambique, with a history dating back as early as 600AD when Arab merchants set up trading posts here for the age-old businesses of ivory, gold and slaves. This was an important trading post on the East African coastline for 500 years and remnants of Arab and Portuguese influence can be seen in the local architecture. Ibo’s quiet streets are lined with dilapidated villas and crumbling, moss-covered buildings. There are few cars, people still use wells for their water supply, chickens and goats roam the streets, and women paint their faces with mussiro, a traditional whitish-yellow paste, used to represent a girl’s virginity.

We arrived at Ibo Island Lodge in time for lunch and the biggest plate of prawns I had ever seen. Several kilos of prawns heavier, we waddled off to see some of the island’s historic buildings. The most impressive site on the island was the pentagon-shaped Fort São João built-in 1791. Originally built to protect Portuguese trade and used to house slaves before they were shipped to other parts of the world, during the struggle for independence hundreds of political prisoners were imprisoned in the fort. When Cyclone Kenneth hit the island in 2019 and 90% of the island’s homes were destroyed, this fort served as a shelter for many of the island’s inhabitants. Today the fort is home to several of Ibo’s legendary silversmiths and has great views over the ocean,

An early morning wakeup call the following day saw us downing coffee before boarding a traditional wooden dhow and heading further south through the archipelago. Rounding a dilapidated wooden wharf and heading out to sea, we climbed onto the dhow’s top deck; a place we would spend much of our time in the coming days. Dhows have sailed the waters of the Quirimbas Archipelago for centuries, ever since Arab merchants of the 8th century arrived and whilst these trading dhows are long gone, the idyllic reefs and atolls are little changed.

The first island on our itinerary was Rolas. We passed through a pod of dolphins, who paid us no attention whatsoever and carried on swimming around us, breaching and diving, so close we could hear the air whistling through their blowholes. Rolas is known for great snorkelling and diving, and from the minute we entered the water we were surrounded by hundreds of tiny translucent fish and bigger fish sporting every imaginable variation of spots, stripes, circles and zigzags. Clams, crayfish, coral were all around us. Back on board after our swim, we ate lunch on the top deck as we set sail to the next island. Occasionally, we would see other dhows, their sails like shark’s fins above the water in the distance.  Otherwise, we felt like we had the entire ocean to ourselves.

6km off the Mozambican coast, and nearly 100km from Pemba, is Matemo Island. This would be our campsite for the night. A long stretch of sand and clear waters lay before us. Local fishermen, children and women with mussiro painted faces greeted us with cheerful ‘bom dias’ as they passed. Girls sang as they wandered over the rocks, with buckets of shellfish balanced on their heads. We lit a bonfire on the beach as the sun went down, the colour of the flames blending perfectly with the vibrant sunset.

Island hopping onwards, the next day’s campsite was Quirimba Island. The snorkelling here was fantastic. Beaded anemones, hinge-beaked shrimp, sea cucumbers and cowries on the sandy bottom. Clownfish hid in anemones as parrot and puffer fish swam past.  Yellow-spotted scorpionfish hid in the coral and thousands of tiny fish darted past like shards of coloured glass. On land fishermen mending their dhows were happy to attempt conversation with me, as I walked along the beach.

Leaving Quirimba, we sailed to our next island destination, Azura Quilálea, a tiny dot of an island. There is plenty of nature here. Hundreds of bird species call the island home, from the migrant olive bee eaters, to vibrant paradise flycatchers and fragile sunbirds. There are 58 ancient baobab trees on the island, some as old as 3,000 years. Walking around the island we found crabs, starfish, cowries, octopus, sea urchins and eels. The island is one of the most important sites in the Quirimbas Archipelago for green and hawksbill turtles, who nest here from December till June, with the hatchlings emerging between January and July.

House Reef, just off Quilálea’s main beach was a paradise for diving and snorkelling. These protected reefs are undisturbed dive sites and home to an array of hard and soft coral. We did several dives here, seeing numerous turtles, as well as rays, giant sea cucumbers, clams, hundreds of colourful fish and miniature, colourful nudibranchs. We followed up our dives with game fishing for yellowfin tuna and barracuda, walks around the island, sea kayaking around neighbouring Sencer Island and finally the island’s ultimate pampering… a giant cast iron bathtub, filled to the brim with bubbles and tropical flowers, on our private verandah overlooking the sea.

Our last morning on the island dawned and after one final snorkel, we boarded a private helicopter that would take us to our next and final destination.

Tracing the coastline from the air, we completed our journey back to where we had begun. Just down the coast from Pemba we landed at Diamonds Mecufi. This was the perfect spot to end our trip. Beautiful beach bungalows with views of the sea and a seemingly endless beach. Long beach walks and swims in the warm clear water, sundowners in the beach bar, swimming in the ocean at sunrise and yet more seafood dinners on our private verandah. There were countless activities to fill our time here, but all we really wanted to do as our journey drew to an end, was relax and remember the amazing adventure we’d had in the incredible Quirimbas.

Getting there: Airlink has flights from Johannesburg to Pemba six days a week.

Cover photo: Stopping for lunch on a sandbar with a Dhow