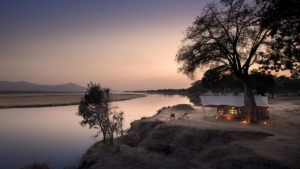 There was a low rumble of elephants. You could almost feel the air vibrate with the sound. The herd approached the waterhole, splashing into the water. One large male attempted full immersion by lying on his side and ducking his head underwater. This was a family group, with a tiny baby in tow. The baby was trying hard to join in with the ‘teenagers’ and would disappear underwater for extended periods of time. Each time I would start to get alarmed and wonder if the baby would ever resurface, a tiny trunk would appear, like a snorkel, just above the waterline. The two teenagers were almost completely immersed and I wondered how the baby was managing to tread water for so long. When tired of the game, the elephants stood up, I realised they’d only been in knee-deep water, I did however also realise the baby, at full height, only reached its knees!

We were at Kanga Camp in Mana Pools, Zimbabwe, a World Heritage Site of incredible wilderness and beauty, and where elephants, of which there are over 12,000 in the park, would definitely be one of the highlights of our stay. After a delectable dinner overlooking the waterhole, the elephants had been using as their swimming pool, we retired to bed. In the middle of the night, we were abruptly woken by what sounded like an elephant, with chronic irritable bowel syndrome, dragging furniture around on our verandah. Peering out into the dark we could see nothing. We never did get to the bottom of what was making the midnight commotion, and when we woke in the morning all the furniture appeared to still be where we had left it. A smear of mud on the corner of the verandah did provide a clue though, that perhaps it had been a convenient elephant ‘scratching post’ under cover of darkness. 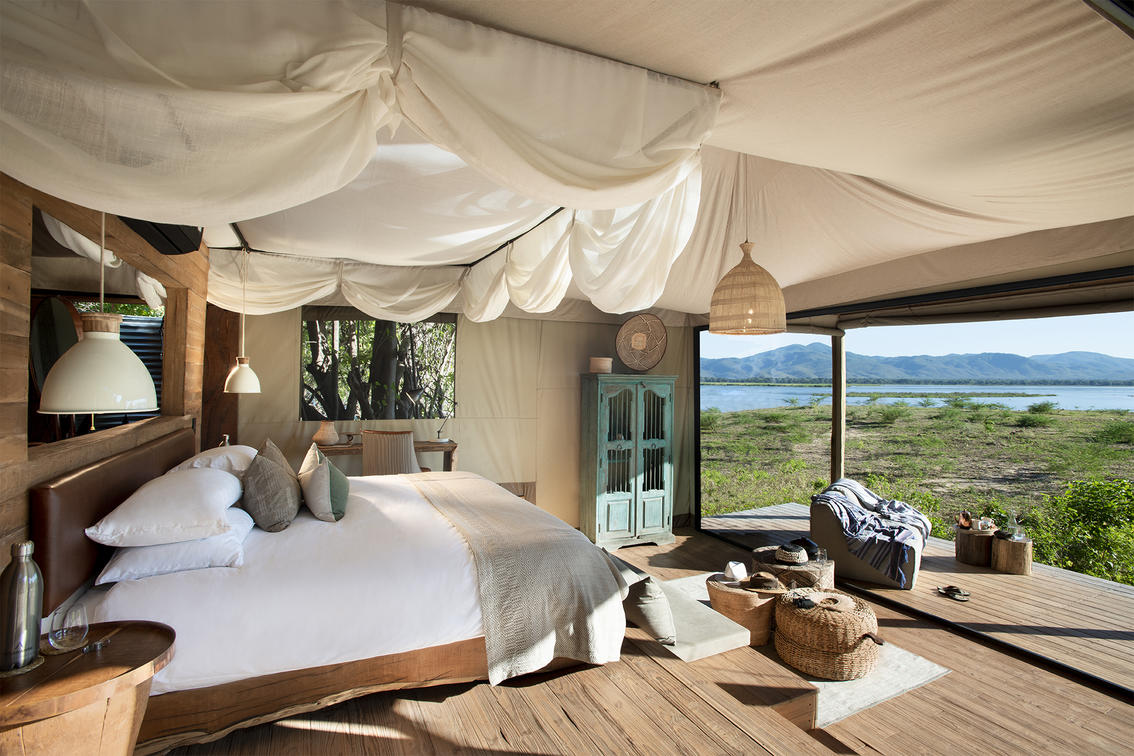 Mana Pools is a 219,600 hectare wildlife conservation area, National Park and World Heritage area in northern Zimbabwe, situated along the lower stretches of the Zambezi River. The river has, over time, gradually changed its course leaving behind river channels, ox-bow lakes and seasonal pools that are surrounded by forests of winter thorn, mahogany, wild fig, ebony and baobab trees. Mana is the Shona (local language) word for ‘four’ and within the park, the abandoned river channels have created four large pools… giving the park its name. All this water provides an abundance of vegetation, attracting a wealth of wildlife. In the dry season, the shady glades beneath the trees, are filled with concentrations of wildlife; herds of impala, eland, elephant, zebra, buffalo, waterbuck and kudu. These populations provide a plentiful supply of prey for both predators and scavengers. There are several sizeable pride of lion, as well as leopard and hyena. Mana Pools is also a stronghold for wild dog, sometimes called painted wolves.

Situated in one of the remotest parts of Mana Pools National Park, 15km from the Zambezi River, Kanga Bush Camp combines luxury with seclusion, with a hint of raw wilderness thrown in for good measure. Kanga Camp was sadly just a pit stop on our way deeper into Mana Pools, but it was not the last we would see of elephants. Next stop on the agenda was Zambezi Expeditions, another of African Bush Camps beautiful locations, this time perched on the banks of the river with the magnificent backdrop of Zambia and the Zambezi Escarpment across the water. Zambezi Expeditions is one of the regular haunts of Boswell an elephant famous in these parts, well known for his tendency to stand on his hind legs when reaching for the succulent looking branches and fruits that would otherwise be out of reach. We would have a couple of up-close encounters with Boswell during our stay, both on land and from the water. 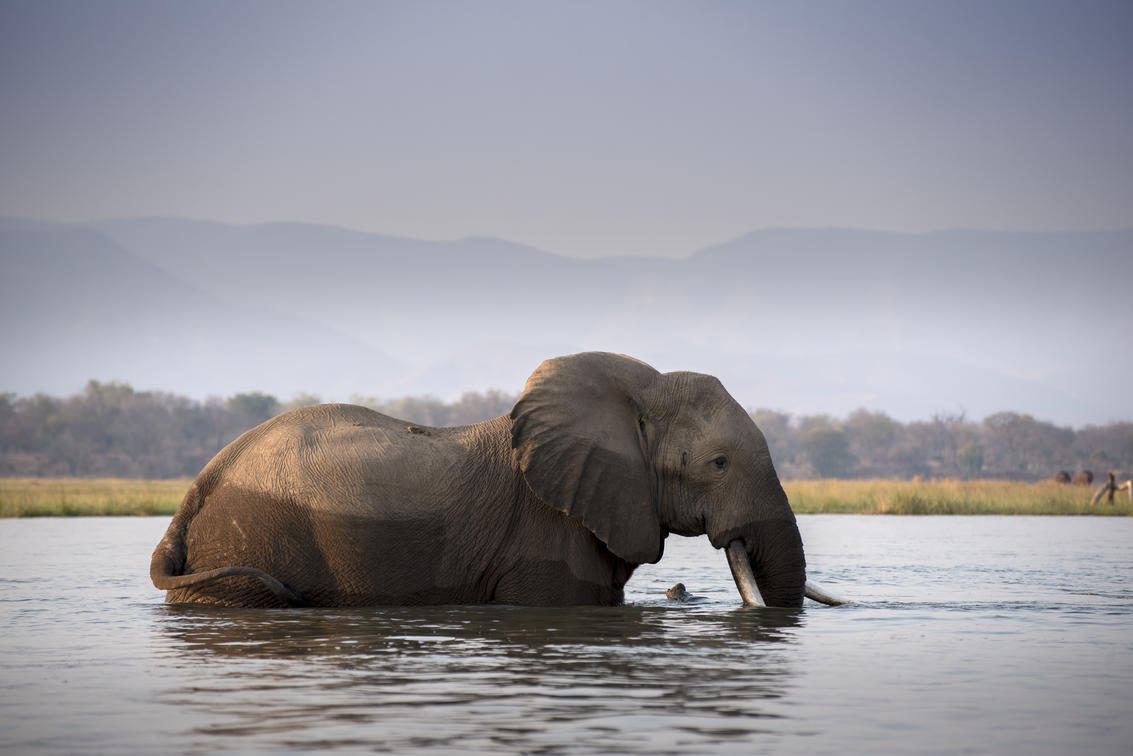 The Zambezi River at Mana Pools is wide and dotted with islands. Over 350 species of bird flourish here, from Goliath herons, cormorants, storks and kingfishers to Spurwing geese, brilliantly coloured bee-eaters and magnificent black and white fish eagles. Hippos warm themselves on the river’s edge in the morning sun and share submerged sandbanks with silent crocodiles. The silhouettes of elephants and buffalo are visible wading in the shallows and feeding on the banks. 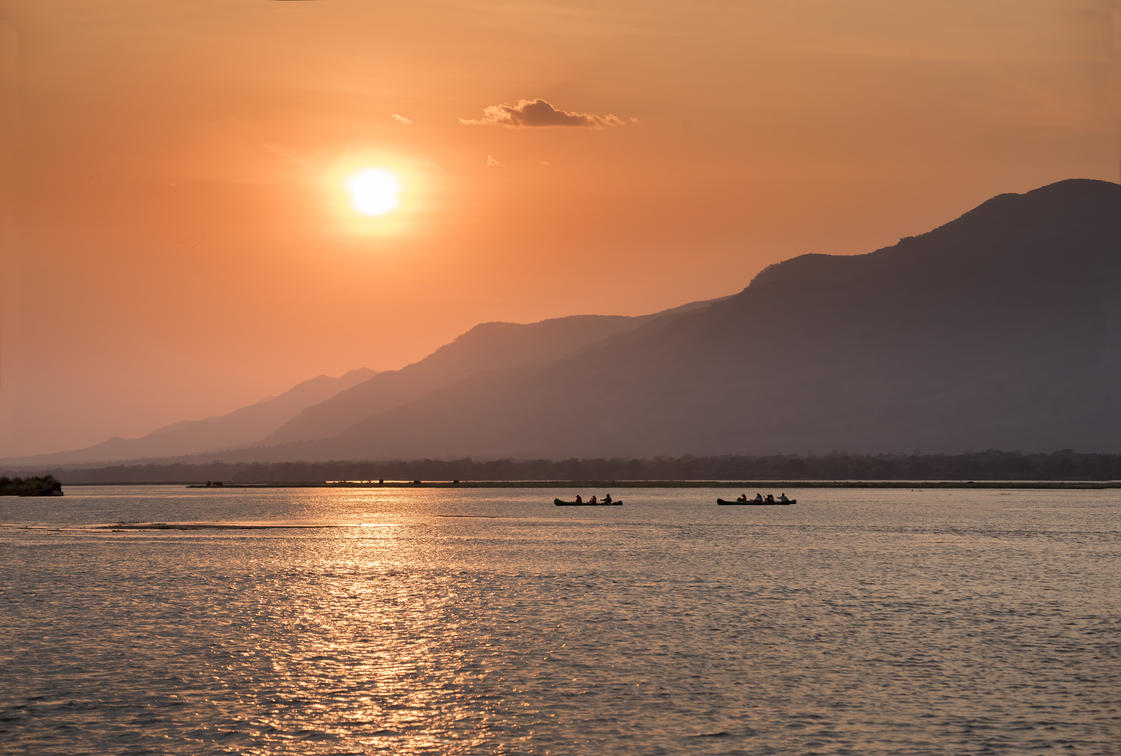 Driving out from Zambezi Expeditions we stumbled upon a pack of sixteen wild dogs. They lay napping in a shady depression, camouflaged in their mottled coats. Aside from the occasional flick of a tail, the pack lay motionless. We were transfixed. The sun sank lower in the sky. One by one the dogs woke, yawned and stretched. Getting to their feet, the pack members exchanged elaborate greetings… whimpering as they sniffed, smelt and licked one another. The dogs became livelier, and it was suddenly apparent what the twenty or thirty hooded vultures, ‘lurking in the wings’, had been waiting for. In preparation for their evening’s hunt, the dogs vacated their digestive systems and I watched horrified, as the vultures squabbled over and made quick work of these ‘deposits’. There was a light-hearted atmosphere amongst the pack members as dogs pranced and played, making half-hearted, playful attempts to catch still lurking vultures. Then, playtime over it was time to get to work, and the pack readied themselves for the night’s hunt. A hyena appeared on the scene, obviously intending to follow the dogs, and hoping to cash in on their hard work and score a free meal.

Breakfast at Zambezi Expeditions is an atmospheric experience. Sitting around the campfire, with tea or coffee in hand, as the sun comes up. 40 or 50 impala grazed on the river bank below and the world woke up around us. We talked about the hyena calls we had heard in the night and were told how, this morning, hyena tracks had been found circling the kitchen tent, which fortunately had been well secured from the midnight marauders. After breakfast, we headed off for a walk. Wildlife in Mana Pools is very relaxed about people on foot. As we drove to a suitable point to start our walk, we came across several lions, including one sauntering past the national park’s headquarters and another one a stone’s throw from the official park campsite. I was rather grateful I wasn’t going to be sleeping in one of those flimsy-looking, two-man tents. Leaving the lions behind, we parked the vehicle and set off on foot with our guides, one bearing morning tea supplies and the other a gun. 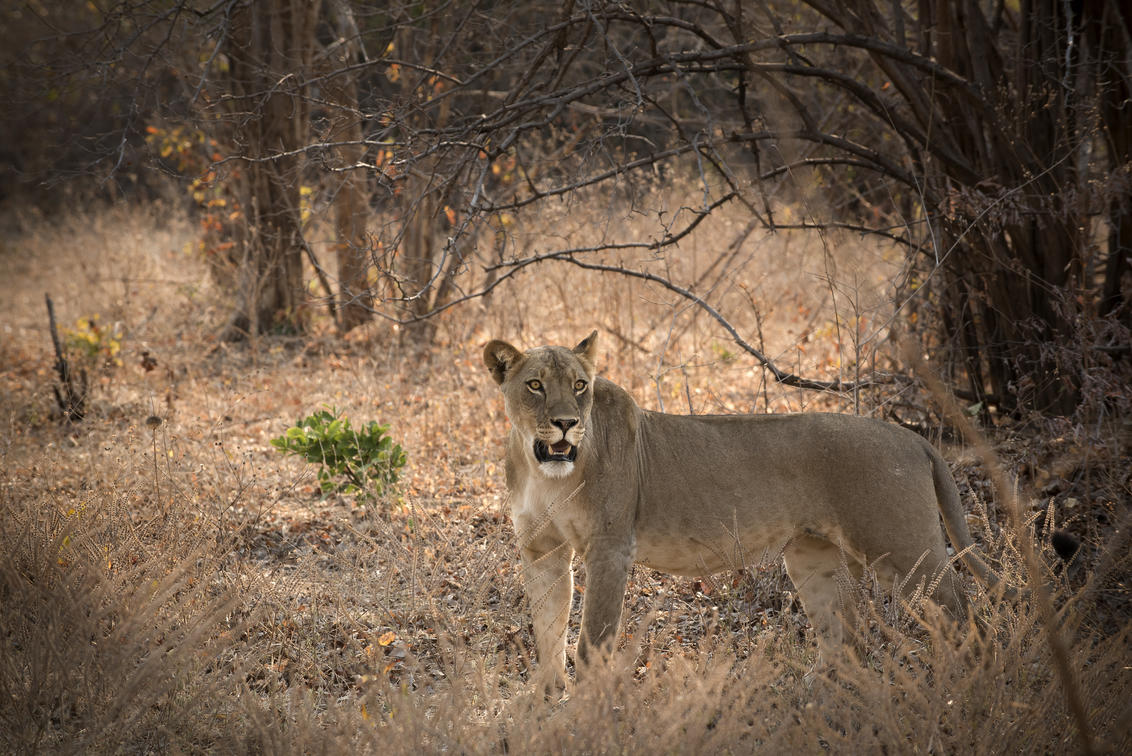 During the rains, most of the big game animals move away from the river and into the escarpment. They start returning to the riverine areas from around April, as the pans in the bush dry up. As the year progresses, increasingly large herds of elephants and buffalos are seen, as well as kudu, waterbuck, zebra, impala and more. This rainy season however had been a sparse and disappointing one, and the wildlife was already starting to make an appearance by the river, months earlier than usual, searching for water and food. We spent several hours on foot in the park that morning, really getting a taste for its wildness and rugged beauty. 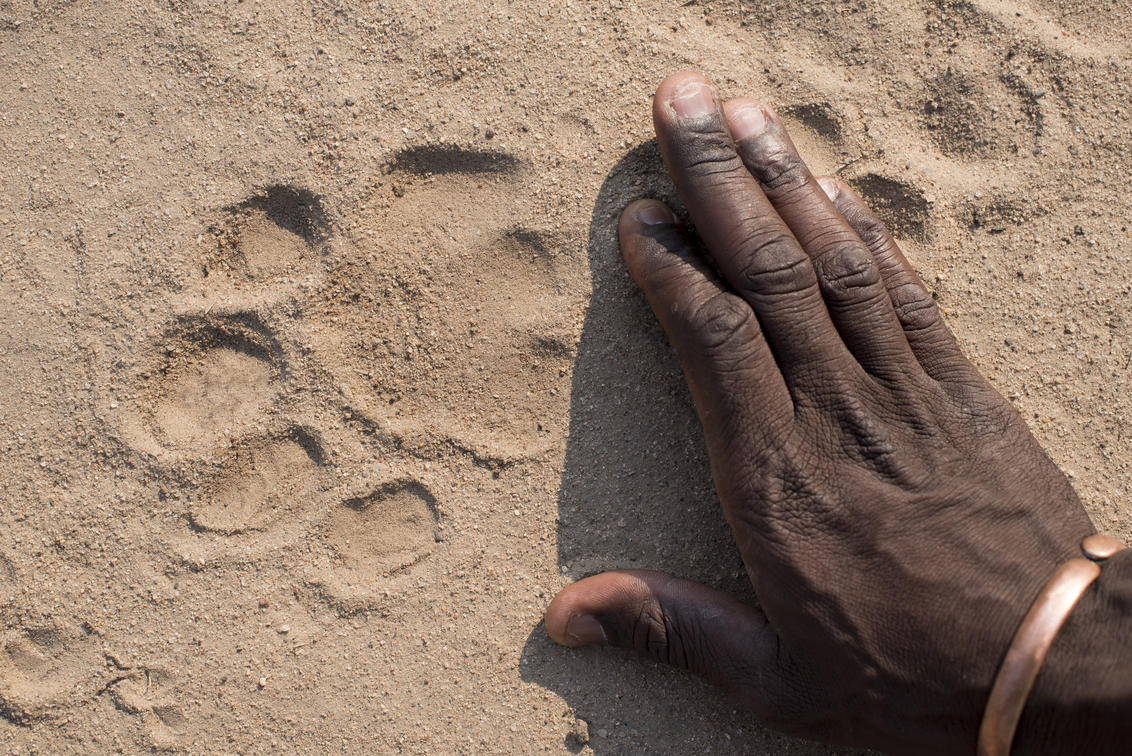 That afternoon we decided on a change of pace and took to canoes. It was the camp’s first canoe trip of the season. The shallow waters and unexpected sandbanks, combined with a few detours necessitated by territorial hippos, made for a few bursts of adrenaline. A herd of waterbuck, unfazed by our presence, leapt across the channel, immediately in front of our canoes, heading from the riverbank to a small island. As we approached camp Boswell, the elephant, suddenly loomed large over us, feeding on an island in the river. As we looked up at him from below, we had a very different perspective of this rather enormous elephant. As we passed almost below him, he could have reached out with the tip of his trunk and very nearly touched us. We ended our canoe trip with a spectacular sandbank sundowner. Alighting from the canoes, drinks were pressed firmly into our hands and we sat watching the vibrant colours of the sunset streaking across the water.

The third camp on our itinerary was the brand new Nyamatusi and it was here that we felt like we had landed in the lap of luxury. The camp had only been open for a matter of weeks and is located in an area of the Mana Pools where access was previously restricted by permit, where it is still only accessible to camp visitors. We felt like we had this remote part of the park to ourselves.

From our beds, we could see the Lower Zambezi National park on the opposite bank, in Zambia. The looming, tree-covered escarpment looked like the folds of a bedspread draped over a sleeping giant. A morning walk took us very close to a dozing lion. We were rather keen to ‘let sleeping lions lie’, but a hippo trotting past, heading to the river and woke it up. Catching a whiff of us on the wind, the lion hastily disappeared from sight. Pressing on a honeyguide flew persistently overhead, and for more than a kilometre, endeavoured to get us to follow him, but his repeated attempts were in vain.

We saw the wild dogs again the next morning. After what had clearly been a successful hunt, they lay resting in the shade, with blood smeared faces and bloated tummies. We returned to camp in time for our own lunch and siesta. In a fitting touch of symmetry, having started our trip with elephants, we spent our final afternoon watching elephants in the distance, patrolling the opposite bank of the river.

Our last night in Mana Pools, rather unexpectedly, the skies opened and when we woke the next morning it was to a world transformed. The clear blue sky had vanished and in its place was mist. It was still drizzling when we walked across to breakfast. Birds were singing, celebrating the unexpected moisture. Antelopes were looking damp and slightly bewildered but had their heads down happily munching. The last rains had fallen in the park four months earlier, and everyone thought that the rainy season had passed the park by. Whilst the drought conditions had meant it would be a bumper season for predators, with all their prey being concentrated along the river, this rain falling now, just as the wet season would normally be coming to a close, could make quite a difference to the park in the months going forward. For us though it meant a very sticky and slippery drive out. The black cotton soil had absorbed the rain like a sponge and seemed reluctant to let us leave, gripping tight to our wheels and sending us skidding and sliding. Providing us with one final adventure.