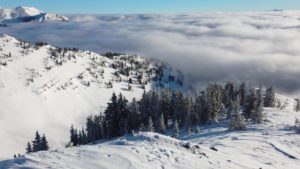 Inspired by images of her dad’s Jackson Hole college ski trip, the author heads north to tour the Tetons and tack a few pictures to the family scrapbook.

This film shot of my father going big on a set of ridiculously thin, twin-tipped K2s cerca 1987 instilled in me a deep gratitude for today’s fat freeride sticks and a sense of duty to keep the family’s cliff-hucking legacy alive. Scrapbook open on his lap, my dad extolled the terrain of Jackson Hole Mountain Resort, which he visited “back in the good ol’ days” at Colorado State University. He described a steep wonderland bespeckled with cliffs that beg for reckoning. After the past several seasons of wimpy Colorado snow totals whilst Jackson churned out foot-deep day after foot-deep day, I was enthused by the resort’s inclusion on my 2018-2019 Ikon Pass. With my own graduation looming in May, I figured the time was right for some Teton escapades. Like father, like daughter.

Car outfitted with a socioeconomically oxymoronic stash of ramen and expensive ski gear, I punched seven hours northward and arrived the night after a vicious storm cycle spat 20 inches of fresh flakes onto the mountains. The next day popped bluebird and my posse navigated the foreign slopes via trial, error, and the inexhaustible freneticism of college kids on vacation. We nabbed fresh tracks on Headwall and Casper Bowl, giggled down pillows on the Crags, and pinballed around the Hobacks. A ride up in the iconic Jackson Hole tram revealed a closed Corbet’s Couloir, ostensibly requiring another wave of coverage before its seasonal unveiling. I was forced to settle for a waffle at Corbet’s Cabin instead of matching my dad’s drop into the legendary chute. With the blood of my father and powder-fueled adrenaline surging through my veins, I willed myself over the most tantalizing cliffs on offer in Rendezvous Bowl.

In the words of the great Cyndi Lauper: Oh daddy dear, you know you’re still number one, but girls, they wanna have fun.

It’s part and parcel of parenthood to agitate over the safety and well-being of one’s children. I’ve subsumed backcountry skiing into my hobbies—new territory for this family’s lineage. On my nascent out-of-bounds outings, my father, a textbook concerned parent, grumbled about avalanches, terrain traps, and my insurmountable naïvity. Several seasons of diligent education, one avy bag, and countless snow pits later, I’ve earned his reluctant acceptance, if not enthusiasm, for my backcountry pursuits.  In the words of the great Cyndi Lauper: Oh daddy dear, you know you’re still number one, but girls, they wanna have fun.

After two days of charging in-bounds, my psyche longed for the solitude of the skintrack. Teton Pass, Grand Teton National Park, and the resort sidecountry make the area a veritable playground for backcountry enthusiasts. It’s a family affair in Jackson; a fraternal ethos is evident in the fact that 97% of the nearly 4 million acres of Teton County are federally owned or state managed. Locals are quick to mark their territory on Teton Pass with the exclamatory hieroglyphs of first tracks, but the terrain is ample enough to find virgin snow. After giving the snowpack several days to stabilize post-squall, we found wiggle room on north-facing aspects along the Mail Cabin Creek drainage. Our final line of Day 1 was the Do-Its, a bifurcated powder track that converges and meanders twelve hundred feet back down to the road. At the hill’s zenith, minute snowflakes collapsed into liquid and rolled from our hardshells. We stood atop a wind-plumped knoll and observed the gnarl of peaks, foregrounded by Mount Taylor and Mount Glory, tumbling into a horizon of exposed rock and liquescent white. The unperturbed flank below screamed for human contact. I was all too happy to oblige the siren’s call with a quick tuck into the void. My skis made that sanctified first contact with the snow below. A crescendo of polestrokes invoked a maelstrom of flakes to drown the world in white. Hips squiggling, mind locked to the minutia, dopamine and adrenaline flooding the nervous system, and a raven on high with a vantage point a ski cinematographer would kill for. Then I burned through the mountain’s vertical; the dance with gravity ended in an expository wave of white smoke. I looked back and the sublime evidence was a single, undulating track across the otherwise unblemished face.

My final day in Jackson came courtesy of Exum Mountain Guides, an 80-year-old Teton-based guiding service that offers instruction and adventure on rope and skis in North America, the Alps, Andes, and Himalayas. The service traces their lineage to local legends of the 1930s like Glenn Exum, Paul Petzoldt, and Barry Corbet. They’re the granddaddy of Jackson guiding services and the resident experts on Grand Teton National Park. Despite the government shut-down and limited National Park operations, dedicated employees were plowing the entrance road and ensuring access to some of the Tetons best snow staches. My guide for the day was Brendan O’neill, who informed me of the birth of his daughter Jessie three weeks prior as we puttered to the Taggart Lake Trailhead.

If newborn Jessie was taxing this new dad’s sleep and energy reserves, his athletic, assiduous pace on the skintrack suggested otherwise. I asked Brendan about fatherhood, hoping to glean some insight into my own dad’s relationship with raising a daughter. He hopes to have Jessie on skis the second she can walk; he would be thrilled if she took to alpine or nordic racing, but amenable if she chose not to compete; he is excited to show her the world beyond the boundaries of a ski resort. As we muscled up towards Amphitheater Lake, I mused that twenty years from now, Jessie might look at pictures of her dad guiding in far-flung locales and make plans to fill and transcend those footsteps. I wonder if Brendan knows how much she will look up to him and his accomplishments.

Even the evergreens projected patriarchy: the tallest trees nucleated their sapling broods with paternal solemnity, each molecule of powder glistening in the shaggy green branches. We broke through the forest onto snow-covered Amphitheater Lake, a cirque bounded by the bald, mangled granite of Teewinot to the north and Disappointment Peak to the west. On a snack pitstop, we watched another party of skiers lay down tracks in Spoon Couloir, a steep, enticing chute on Disappointment Peak’s lower haunch. Brendan seemed to sense my desire to get after a big alpine line and suggested we bootpack the Spoon— must have been his newly acquired parental mind-reading superpower. After crossing the lake, we cut a haphazard zig-zag to the top of the Spoon’s apron and transitioned to the bootpack. 500 feet of vertical boot-punching propelled us up the gut and bookended the nearly 5,000 feet of vertical notched from trailhead to objective. From our humble perch on Disappointment’s flank, an electric blue sky slumbered atop a soupy mass of clouds, hallmark of a Teton Valley temperature inversion. Backgrounded by this topsy-turvy atmosphere, I skied down the hard-packed snow of the spoon’s handle into its apron of softer powder.

Grand Teton, senior pinnacle of its range, poised with patriarchal authority over Middle Teton, Mt. Owen, and all the rest

To redeem the remainder of our hard-earned vertical, Brendan led us through a mellow glade percolated with unrumpled pillows aplenty. Matching his cuts through the pines was reminiscent of a childhood spent following my dad around the resort as I learned to trust my edges and my body. As I ripped skins back in the parking lot, giddy with alpine energy, I turned to gaze up at the Grand Teton, senior pinnacle of its range, poised with patriarchal authority over Middle Teton, Mt. Owen, and all the rest. I owe this unforgettable trip to Jackson Hole to my father for choosing to raise and inspire (and generously fund) a skier.

Thanks to Exum Mountain Guides for making this trip possible.