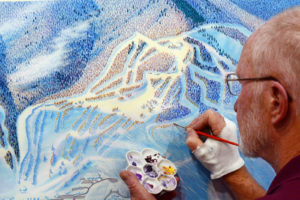 If you’ve ever unfolded a ski resort trail map and plotted your day on the mountain, you’ve probably got James Niehues (pronounced “Nee-hews”) to thank. He doesn’t throw backflips and won’t feature in the next Warren Miller film, but he’s arguably the most ubiquitous name in skiing.

The map-maker/artist extraordinaire goes by Jim, and he’s illustrated almost 200 ski resorts worldwide in resplendent detail. Equal parts art and atlas, his work suffuses a passion and idiosyncrasy undeniably compatible with the world of snowsports. Every meticulously painted evergreen and the careful shading of cliffs and gullies are evidence of Niehues’s commitment to verisimilitude. In April of 2018, Jim and a team of innovators got the idea to curate a hardcover coffee table book to showcase his life’s work of ski cartography. The campaign hit Kickstarter in November 2018 with a goal of raising $8,000. As of the project’s January 2019 deadline, 5,196 backers had pledged $590,088, making Jim’s magnum opus Kickstarter’s highest-funded illustration project ever.

Niehues did not anticipate the overwhelming response. “That last day, we were going absolutely crazy. Half a million! I couldn’t believe it!” he exclaimed. “I knew there were some real trail map nuts out there, but I was surprised by the amount of people.” The enormous success of the Kickstarter campaign may have stunned Niehues, but the adulation is overdue for the undersung king of ski cartography.

In the late 1980s, at age 40, Niehues began his prolific career under the tutelage of reigning ski resort illustrator Bill Brown. “I got lucky in the beginning, had good exposure, and my career blossomed—no, exploded,” he described. Though Jim had skied briefly in the Alps in the 60s on duty in the Army, he was not a snowsports fanatic when he began painting maps for the industry. Over time, he became a self-described “intermediate skier” via “on-the-job training”. His hometown hill is Powderhorn Mountain Resort, outside of Grand Junction, Colorado, and he frequented mom-and-pop Sunlight Mountain Resort in nearby Glenwood Springs with his kids. But he’s set skis down on only a handful of the nearly 200 world-class locales he’s painted, preferring to pay homage to the mountains through art rather than athletics. At age 72, Niehues has captured a global array of resorts, showcasing the splendour of the slopes in two dimensions on a 4”x9” folded map. Play ‘I Spy’ with your next trail map—you might find Niehues’s signature hidden in a copse of trees.

Maybe there’s something in Niehues’s work that can’t be captured in pixels.

It’s the Digital Age and mega ski resorts are implementing high-tech upgrades: RFID (radio-frequency identification) gates, all-mountain WiFi, and navigation apps like Vail’s EpicMix. One might fear that Niehues’s hand-drawn creations will be rendered obsolete by computer-generated designs. But he’s stayed in-demand at resorts large and small around the world. Niehues thinks that until technology improves, computers can’t compete with the accuracy afforded by the artist’s imagination. “So far, digital maps are just an artist using Photoshop. They don’t offer anything that a hand-painted map can’t.” And maybe there’s something in Niehues’s work that can’t be captured in pixels. “These maps represent the Great Outdoors. Users are there to ski and appreciate the surroundings, and I don’t think a computer-generated image offers the same connection,” he opines. Certainly, the pastel peaks of the Elk Range backgrounding Aspen Highlands or the creamy contours of New Zealand’s Whakapapa effuse a je ne se quois inconceivable of a CGI. Like Bill Brown before him, Niehues wants to preserve the tradition of homespun ski maps. His own protégé, illustrator Rad Smith, is a CGI guy—Niehues is mentoring him in hand illustration. In an increasingly digitized world, Niehues’s maps epitomize the indispensability of handicraft.

Though he’s been thinking about retirement for the past several years, Niehues just can’t bring himself to put the paintbrush down. “A ski resort will call me up, and I just can’t resist the offer. I enjoy doing it; it’s a challenge and it’s very rewarding. It doesn’t feel like a job—it’s like a hobby on steroids,” he explains. In fact, one of Niehues’s current projects, Mt. Bachelor ski resort in Oregon, is a fresh challenge. “It’s got skiing on a volcano at all 360 degrees and I’ve got to get it all in one view,” he says. He’s also occupied with the post-production of his Kickstarter book. Todd Bennett, a member of the creative team behind the campaign, says the project is in its concept design and layout phase. The finished product will include a story component orchestrated by writer Jason Blevins of the Colorado Sun. “Working with Jim has been a really fun fanboy experience,” Bennett laughs. He too was blown away by the massive success of the Kickstarter campaign. “We had a very humble goal of $8,000, and day one, we hit $60,000. It was awesome to see so many people interested in Jim’s story,” he says. Jim’s biographic exhibition is Open Road Ski Company’s first commercial venture, and backers can expect their hardcover editions in June of 2019. With the enormous success of his Kickstarter campaign as rocket fuel, the reigning king of ski cartography paints on.

For a full selection of Jim’s art, visit his website here.