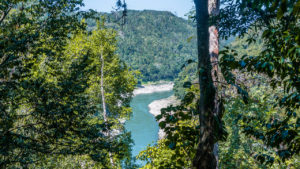 Rafting The Usumacinta River: Highway of the Maya – Part One

The Mayan ruins, largely abandoned by 1000 AD, were left to moulder under the engulfing jungle. Today, the descendants of these ancients remain on the move, the Usumacinta is their river of life.

Jack Billings has previously featured in The Outdoor Journal, and more information can be found on his contributor page. On this occasion, the below article and adventure was shared with Linda DeSpain married since 1981, having enjoyed their first river date in March 1978. A world traveller across all hemispheres, she continues to focus on her writing what she insists others portray in theirs: capture all of the senses. Linda currently dips into adjunct teaching with a college of education students. Meanwhile, she captures her wanderlust for excursions

For aeons untold the Usumacinta River of Mesoamerica has been the easiest way through the dense jungle to transport people and goods. As the source of water, irrigation, and food for the entire basin, it remains the connection between present and ancient. The river has connected sophisticated regional centers with millions of citizens who shared and fought over commerce and territory. The most-developed restorations boast of regal architecture, intense cosmological ceremony, irrigated agriculture and astrological observation – all from peoples who built immense stone monuments without beasts of burden or metal tools. The Mayan ruins accessible today, largely abandoned by 1000 AD, were left to moulder under the engulfing jungle. Today, the descendants of these ancients remain on the move and the Usumacinta is their river of life.

Imagine a seven-day 88-mile rafting excursion on the frontier between Mexico and Guatemala. Combine serenades by howler monkeys while crocodiles bask on rocks near the water’s edge. Squadrons of small, blunt-faced green parrots called loras chatter overhead. The marvelous waterfall at Cascada Busiljá propels itself over travertine boulders into the river, and an epic adventure is borne. Add the chance to visit two abandoned, ancient Maya kingdom-cities, accessible only from the river, and you have the rafting trip of a lifetime: Usumacinta, the Sacred Monkey River.

The Usumacinta rises in the western Guatemala highlands, and the mountains and high ground in southern Chiapas, Mexico, forming part of their common boundary. This aquatic highway that supported the rise of Mayan civilization then flows north-northwest until it reaches the Gulf of Mexico and one of the richest fisheries in the world.

We found this trip on outfitter Rocky Contos’ Sierrarios.org website months before and were instantly excited. Contact with other boating friends very shortly assembled a group of 11 experienced rafters. Our rallying point was Palenque, Mexico, near the magnificent Maya ruins of the same name.

Though an important state, at least two other major kingdoms located on the Usumacinta rivaled Palenque and dominated the river’s vital trade route: Yaxchilán and Piedras Negras. Today, much of these ruins have been hacked out of the enveloping jungle. Far more are unrevealed.

The Mayan civilization reached its zenith during the classical era from 300 to 1000 AD. Recent, revolutionary technology known as light detection and ranging (LiDAR) allows scholars to remove digitally the tree canopy from aerial images of the now-unpopulated landscape. The ruins of a sprawling pre-Colombian civilization have emerged that were far more complex and interconnected than most researchers had supposed.

Assembling in Palenque, our group joined the three guides, Herman, Fernando and René. All our personal gear, coolers, and other supplies were loaded into a large trailer, pulled by a nine-passenger van that carried most of our group. On the morning of February 20, we departed Palenque for a five-hour drive to the launch site at Frontera Corozal.

At Frontera, the river is wide, slow-moving, a deep, emerald green. With the help of the guides and a few local fellows, we inflated all five 16-foot self-bailing rafts with hand pumps, together with two catarafts and three inflatable kayaks. By 4:15 PM, with a few quick strokes, we pulled into the current and began our journey downstream.  We went only about five km when the fading afternoon light urged us into camp at an unbroken expansive sand beach on the Mexico side of the river. We were on our way!

Running at about 28000 cubic feet per second the water was a very comfortable temperature, unlike other rivers we have run. Almost immediately after launch, the howler monkeys took up roaring and bellowing across the river. Theirs is the quintessential sound of the jungle. The voice is deep, loud and hoarse, something like a gigantic sea lion or a small T-Rex. From perches high in the canopy their distinctive sound carried through the river corridor.

That night the full moon rose over Guatemala, directly across the river. For a time, it was obscured by a large cloud with beams shining both up and down toward the river. As it got dark, an impressive frog chorus sprung up across from us. There seemed to be two groups, calling and responding to one another.

The next morning, we resumed our passage to the Yaxchilán ruins, located within a large horseshoe-shaped bend in the river. Though not as extensively excavated and restored as Palenque, this site is particularly known for its well-preserved sculptured stone lintels set above the doorways of the main structures. A large plaza overlooks the river and the lowlands beyond. Yaxchilán was often in conflict with its downstream rival, Piedras Negras, and went to war with Paleque in 654.

Because the Yaxchilán site has been excavated and restored well up the hillside, trails through the jungle bring you to sunlight. Everywhere were new scents, some sweet, others spicy, still others earthy. The density of the jungle at the margins of the ruins reminded us that it never sleeps and is always growing.

An active water taxi service brings tourists from Frontera every day. These 25-feet long, narrow, wooden boats are powered by 60HP motors and are outfitted with an awning over the middle to provide shade and rain protection for travelers. While most of the visitors spoke Spanish, we also heard French and English.

The river flows by, mostly silent, an omnipresent force dividing the jungle canopy. Some riparian banks are sandy and brush covered. Elsewhere is a continual jumble of limestone rocks and slabs, often fluted from aeons of tides and sediment. An insect chorus calls constantly out of the dark.

We breathe freely on the water while the jungle seems impossibly dense. Shimmering curtains of strangling, suffocating vines line both sides of the river. The diversity of canopy layers is striking. A flowering tree springs forth while mysterious scents waft across the river.

A welcome relief from the heat of the day and exertion of rowing awaits us at a cascading travertine spring not far downstream. It beckons the chance to jump off a 15-foot ledge into the deep, cool water.

You can read second part of Rafting The Usumacinta River: Highway of the Maya here.