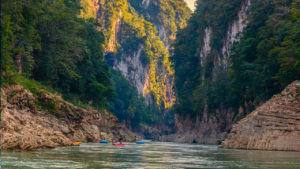 Rafting The Usumacinta River: Highway of the Maya – Part Two

The conclusion to a journey down the Usumacinta River, where we're reminded of the ancient past, the recent past, and the present, all amongst beautiful landscapes.

This is the second part of Jack Billings and Linda DeSpain’s adventure down the Usumacinta River. The first part can be read here.

One of our most memorable camps was el Playon, on a beautiful, huge beach somewhere in Guatemala. It is the largest sand expanse of any freshwater setting we have seen. The light at sunrise illuminated a captivating mist that hung over the river upstream and filled the low valleys across the river. The canopy stood in dark contrast on the horizon. Birds began their calls close by, and monkeys joined in from a distance of at least half a mile.

About a third of the way into our trip we were joined by an armed escort in fishermen’s clothing. We knew the outfitter had contemplated this assistance. Both Guatemala and Mexico experienced civil war or violent uprisings in years past. Desperate people were still on the move in the river basin. We couldn’t say whether the escort was necessary, but we were glad for their presence.

On the fourth morning, we came upon a group of children playing on the Mexico side of the river bank, along with women doing laundry. We pulled in to say hello and the number of kids promptly doubled. We had arrived at the pueblo of Arroyo Jerusalem. Caucasians in outfitted rafts are an obvious novelty. As we followed Herman up to the trail to the village, several of the young children guided our elbows, solicitous of our apparent advanced age.

Efforts to communicate with the children were hampered because their primary language is Chol, a Mayan dialect completely different than Spanish. However, we were able to play string games and pantomime with hand contortions that are universally understood. If children’s laughter is a barometer for the health of the pueblo, then this community was doing very well. While visiting with the locals, Hermann bought a live chicken, which he brought down the river for that night’s layover dinner at Piedras Negras.

After a short run to Piedras Negras, we pitched our camp on a terraced 50-foot soft sand bank. The promontory view was worth the effort. We were set to hear rival choruses of monkeys on each side of the river. The recently purchased chicken clucked its way into nearby brush. Before long, it was lured back to the kitchen area by a trail of popcorn seed, then readied for a gargantuan pot of noodles and cabbage. One of the escorts brought us five fish they had caught, and a grille was fashioned to fry them. We joined forces with the makings of a fresh gourmet dinner. We were eager to explore after an easy rise in the morning.

For many, the camp at Piedras Negras was the most memorable. We were literally in the landing area of this great kingdom-city, where its citizens and explorers accessed the river 1500 years ago. A large glyph engraving faced skyward on a boulder next to camp. And, we had the sweet circumstance of a layover day full of hiking, swimming, and long conversations over the campfire.

Piedras Negras is too far downstream from Frontera for day trips. Except for resident park employees and conservators, almost no one visits. Four park rangers came down to chat and to appreciate a break from their own cooking.

The ruins here are not as thoroughly excavated as those at Palenque and Yaxchilán. Yet we could see how the design and architecture were every bit as impressive and uniquely influenced. At their height, these kingdom-cities if known would have been wonders of the western hemisphere and would have rivaled or surpassed eastern progress.

After recovery from a drenching rain shower, we pushed on. Regrets over soggy gear faded into our next adventure. Even though our rain fly proved too small, at least we had it in place on time. We could count on the fact that we would always be warm!

A couple of hours below Piedras Negras we pulled into a cove with a most spectacular waterfall, Cascadia Busiljá. Coming down a steep canyon, its source stream plunges over travertine-coated rocks and projects into the river. Most of us hiked up a trail behind the falls to see its origin. Others cooled off below in the spray shower that envelops the outcropping.

Anticipation peaked when about 15 km below the cascade, we entered the Grand Canyon de San José. Vertical, steep limestone cliffs narrow the river and rise above as high as 1800 feet. Even here, the jungle fills in the river banks and the fissures among the cliffs.

The deep whirling water created many eddies. Maintaining headway in this fickle current was challenging. In many of the small swirls, we began to see bobbing plastic bottles, the tell-tale floats attached to purse-like seine nets. These mini-fisheries were managed by families and friends who collectively checked the nets daily.

Nearing our last camp, as the sun dropped lower in the late afternoon sky, we rounded a bend and found a nice sand bar across from the community of Francisco Madero. As we tied off on the bank, fellows from the village paddled across to see us. The common watercraft here is a low-draft, 12-foot, flat bottomed canoe with a transom. The boatman stands aft and paddles or poles as circumstances require. Because we hoped to camp directly across from the village, we asked permission, which was readily given. The camp area was obviously frequented by local livestock. Our trusty shovel was handy for flicking manure away from tent sites and walkways.

The next morning a man and his son came across to ply us with hand-made, wooden artesanias. He told us of his workshop and showed us his cutting boards and spatulas from local wood, melino. We now have a spatula for the kitchen which will always remind us of this trip.

People remain on the move in this corridor. On day one, as we drove to the launch point at Frontera, Herman pointed out migrants from Guatemala or Honduras, small groups of young men trekking in the opposite direction. He identified them through their darker skin, the fact that they were traveling lightly with only backpacks and carried no machetes or other farm-related hand tools.

During our week on the river, we saw several of the shuttle taxis roaring downstream at full throttle carrying a packed group of other migrants. Frequently passing in the night these drivers plied the river without a light, reflecting their knowledge of the river and the clandestine nature of their cargo.  By pooling their resources and hiring the boat, these travelers saved themselves at least a week of hot, humid and dusty plodding along the highway. Both water and overland migrants may not be headed for the United States. Instead, we understand they are willing to take low-paying Mexican jobs in the fields and for a railroad. It is a telling commentary about the desperation and violence of their own communities that these young men would launch themselves over many weeks, mostly on foot, to leave their homes and come by whatever means available.

We foresee how the future of the ancient and mighty Usumacinta is troubled. Its heart could be broken by a dam the Mexican government energy agency wants to build at Boca del Cerro, our take-out point. This dam would flood the river up to Piedras Negras, drown all the rapids in the main canyon, block the flow of sediment and fish, and forcibly remove all the residents along the river, including the entire pueblo of Francisco Madero. Perhaps the new government of President Lopez Obrador, will bring a holistic and existential approach to the preservation of this immense cultural and environmental resource for centuries more to come.