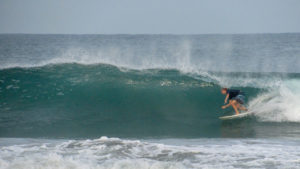 For most people, Puerto Escondido is just a dot on a map, a tourist destination overshadowed by flashier resort towns such as Cancun, Cabo, and Acapulco.

Hell, most people have probably never heard of it in the first place. There’s not much reason for the average tourist looking for a quick fix of tropics to go there. After all, there are more convenient places to go in Mexico with the open bars and infinity pools that they are looking for. But even for those who may have been there and enjoyed it, they may not fully understand how special this place really is.

For surfers, the name Puerto Escondido carries a much heavier weight (I say that as unpretentiously as possible.)

For surfers, the name Puerto Escondido carries a much heavier weight (I say that as unpretentiously as possible.) It has a different connotation. Hearing the name alone generates anxiety, intrigue, excitement, day dreams. Often referred to as “the Mexican Pipeline,” it provokes images of perfect, bone-breaking waves, waves that prove a challenge for even the best surfers on the planet. Surfers around the world know the town simply as “Puerto,” and given the thousands of towns across Latin America that start with “Puerto,” that goes to show the significance that this town holds for the avid surfer.

Now, as an average surfer from San Diego, I wasn’t even sure if I was capable of surfing the infamous, powerful waves of Puerto’s Playa Zicatela. I sure as hell didn’t have the ideal equipment to surf large, hollow waves, given that my surfboard selection has been adapted to the relatively mellow reefs and beach breaks of California’s San Diego County.

Despite my doubts, my girlfriend Madison and I decided to book a quick five day trip to Puerto Escondido for several reasons.

1) Puerto has an airport, which maximized our vacation time for a quick trip. No need to deal with rental cars and hours driving to our destination.

2) I wanted to go somewhere new. As my twelfth passport stamp into Mexico, I had covered a lot of the easy-to-get-to destinations on the Pacific Coast. Puerto had eluded me.

3) Round trip tickets are cheap as hell. (About $230 if I remember correctly, and we flew out on a Sunday, which is pricer.)

4) It’s a world class surf destination in a populated town. Non-surfers can be entertained. (Many good surf spots are in the middle of nowhere, which can get boring if you don’t surf.)

So off to Puerto we went with my worn, small backpack and two surfboards, hoping to at worst spend a few days enjoying the warmth of the tropics, and at best to get some of the best waves of my life.

When you step off the no frills, air-conditioned plane onto the tarmac in Puerto, the humidity of the tropics hits you like a brick wall, causing all your sweat glands to kick into overdrive.

Upon exiting the airport you have to deal with my least favorite part of traveling in Mexico (well, anywhere really), which is taxi drivers eager to make a few bucks off gringos who aren’t familiar with the local prices. I swear, these guys will go to great lengths to get you to pay way more than you should. Luckily, we were given a tip to leave the airport and get a taxi off the street. We were able to find a taxi for 1/4 the price of the airport taxis, despite the intimidation and warnings from the airport taxi drivers who were adamant that we were never going to find a ride out there.

I threw on my boardshorts, waxed up my boards, and lathered myself in enough SPF50 to save the Arctic ice pack.

I brought a surf rack in anticipation of putting my board on a taxi, but the taxi drivers all come prepared with their own rope and are rather well-versed in the art of tying a board down to a roof. Even before getting to the beach you can feel the surf-culture imbued in this little town, in the taxi drivers of all things.

On the first morning I woke up at the crack of dawn and peered out to the beach below, which was visible from the deck of my airbnb. It was a perfect day for a newcomer to Puerto. Not too big, but not too small. There was an ideal, medium sized swell on tap.

Anxious to get in the water, I threw on my boardshorts, waxed up my boards, and lathered myself in enough SPF50 to save the Arctic ice pack.

I spent the morning having the time of my life, picking off countless left and righthand waves. I enjoyed getting a feel for the speed and power of the wave at Playa Zicatela.

I definitely got the best barrel of my life, and a few others worthy of honorable mention.

There were lots of surfers out in the water, but the playing field was so spread out that each surfer had their own comfortable bubble of space where they could claim nearly any wave that approached their zone. I surfed until the wind switched from offshore to onshore, deteriorating the conditions, and sought out some shade to halt the onset of sunburn.

This was the first of my lengthy sessions during the trip. I definitely got the best barrel of my life, and a few others worthy of honorable mention. When the swell got too big for Zicatela, I checked out some of the other waves that the town has to offer, such as the left point called La Punta. I surfed enough solid-size waves that when I came back to San Diego, I had very little desire to surf the poorly formed knee to waist high waves at my local beach break.

When we weren’t surfing we explored some other more secluded beaches in the town and the surrounding area. Activities were sandwiched between long naps under fans on full blast and snacking on PB&J’s. We ate out a few times, rented a car for a quick morning/afternoon, and even got Madison on a surfboard at one of the friendlier surf spots in town. Then, next thing you knew, fives days in paradise had vanished and it was time to head back home in time for the work week.

My first trip to Puerto was a success. I fell in love with the little town, which exceeded its reputation in my book and provided an even better experience and better waves than I had hoped for. Next time I think I will rent a car to explore some of the other waves outside of town, but I know my first trip in Puerto surely won’t be my last.

Evan Quarnstrom grew up in the quiet surf town of Santa Cruz, California, where unsurprisingly he developed a love for the ocean and nature. At 18, Evan headed for San Diego in pursuit of warmer weather and an education. Evan attended San Diego State University to study International Business, finishing of his degree off with a year-long study abroad program in Chile. Evan is now the Marketing and Media Manager at the International Surfing Association.