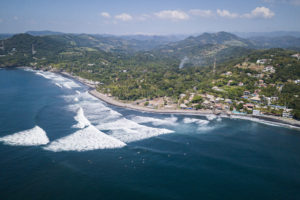 Surf City: Pulling Back the Veil on El Salvador

What surfers have found in El Salvador is a far cry from the preconceived notions compounded by sensationalist headlines.

El Salvador is a small country with a big reputation. Its notoriety for gang violence far exceeds the attention that it deserves as a tropical paradise for surfers. At least in the US, most people are familiar with the gang MS-13 and its ties to El Salvador, but most couldn’t tell you anything else about the country. Could your average Joe even place El Salvador on a map?

While the small Central American nation of six million has suffered a global PR problem over the decades fueled by civil war and violence, surfers have been the principal early adopters of El Salvador’s coast, willing to test the waters of places that governments advise against visiting. The nation is blessed with a coast that beckons the robust swells of the South Pacific, drawing the raw energy to the tropical waters covering its reefs, points, and beaches that cause the waves to bend and break in forms that surfers only dream of.

El Salvador’s new President, Nayib Bukele, is aware of the largely untapped resource that is the year-round waves breaking on his country’s coastline, and his idea to use surfing as a tool to develop his country is what brings me into the story.

Bukele — a young, unconventional president who breaks the mold by refusing to wear a tie with his unbuttoned jacket, having a cabinet comprised of 50% women, and transparently making presidential commands via social media — has the vision to make El Salvador a global destination for tourists, particularly surfers. President Bukele’s idea to use surfing as a tool to develop his country is what brings me into the story.

A President who has Never Surfed, is Betting on Surfing

Nayib Bukele has said that he’s not surfed in his life, nor does he plan to. However, he sees the ocean as a way to develop his country, create jobs, bring people out of poverty, and reintegrate gang members into society. Early in his presidential term, he seems to be a man of his word, as his administration has launched a “Surf City” campaign to show the beauty of their coastline to the world.

How does one show their excellent waves to the world? An in-person exhibit is probably the most efficient and convincing method. As part of the campaign, El Salvador has started to host international events, including the International Surfing Association’s World SUP and Paddleboard Championship (where I serve as Media Manager).

With a bit of a late notice, I packed my bags for El Salvador as enlisted help, a small piece of a big plan, to develop and improve the country through surf tourism. We were set to host a StandUp Paddle event that would bring over 150 competitors from 27 nations around the world to visit El Salvador.

Getting my Feet Wet

I wouldn’t say that I was afraid of visiting El Salvador, but if I were looking to spend some hard-earned dollars on a surf trip, I would tend to lean towards places a little more familiar — Mexico, Costa Rica, Nicaragua. That said, it didn’t take me long to realize what I had been missing once I arrived.

We were put up in a hotel right on the point break of El Sunzal, less than an hour by car from the international airport and the nation’s capital.

I awoke on the first morning to check the waves and was pleasantly surprised by the size and consistency of the swell reeling down the point. It didn’t take me more than ten seconds to speed walk back to the room to throw on my trunks and cake my face in sunscreen. Usually, I don’t get to surf that much at work events, but with early sunrises and accommodation, a stone’s throw from a point break changed that. Squeezing in a good morning surf makes the workday so much easier.

El Salvador is known for its right-hand point breaks, so as a regular footer I was in heaven. I spent every morning surfing, afternoons hiding from the blazing sun while banging away at a keyboard, and evenings surfing again.

the “Surf City” campaign “is going to work.”

Just days after arriving in El Salvador, I found myself face to face with President Bukele, speaking to him, shaking his hand, taking photos. He held an engagement to meet the event staff and athletes at his presidential palace in the nation’s capital. The fact that a President is willing to give the time of day to a bunch of surfers is quite unprecedented.

Knowing that I don’t have nearly enough of an understanding of the political landscape of the country to overly judge the president on his policies, I went off the little that I did know and first (in person) impressions. I truly felt that the man was sincere. It didn’t feel like he was above those that he spoke to. He definitely spoke with confidence, repeating multiple times that the “Surf City” campaign “is going to work.”

I felt oddly relaxed around the President, maybe not as nervous as I should have been. I left that engagement knowing that was probably the only time I will ever shake the hand of an active president in my life.

Is this the Real El Salvador?

My love at first sight with El Salvador’s coast made me realize that I was an unconscious adherent to the negative global image of the country.

I’ve been to lots of countries around the world and know that you cannot read a book by its cover. People tend to be helpful and friendly in all countries, but I also know that they can easily be overshadowed by a few bad apples. As I spent my last days in the country enamored with what I’ve experienced, I know that whether for better or worse, I’ve only seen a small slice of the pie.

As with most of the countries that I visit for work events, it’s really just a passing glimpse of the culture and a far cry from truly experiencing the locals’ way of life. Working when a huge international event is running is not necessarily an accurate representation of a country, especially when the event funding, infrastructure, support staff, and visitors that are brought by the event are removed from the equation.

That said, as I think back about my time in El Salvador, it has been an amazing, eye-opening experience, but I can’t help but wonder if what I’ve seen is what life is really like in the country. Does the gang activity affect Salvadorian’s lives more than meets the naked eye?

At this point, I am ready to give El Salvador the benefit of the doubt, but at the same time know that a return trip is in order. Getting to more intimately know the waves, the culture, the nature, and the society, whether it confirms or denies any preconceived notions, is just more reason to come back.

Despite my lingering uncertainty, one thing is certain: President Bukele’s plan is working. The proof is in the pudding. A Gringo like myself, whose only opinion of El Salvador had been molded by the internet and hearsay, is now a believer in the nation’s natural beauty and rich culture.