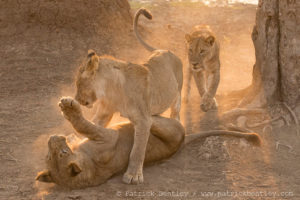 It might read more like a script from the Lion King, but South Luangwa is very real. An immersive tale of Elephants, Giraffes, Antelope, Hippos, Zebra, Lions, and so much more.

Looking out onto an oxbow lagoon and open plains, Lion Camp in Zambia’s South Luangwa National Park is a stylish and special place, located in the remote north of the park and surrounded by abundant wildlife. The lodge is built on raised wooden platforms, interlinked by a wooden boardwalk, with the entire camp having spectacular panoramic views, be it from your bed or the breakfast table.

South Luangwa in eastern Zambia, is the southernmost of three national parks in the Luangwa River valley (the others being North Luangwa and Luambe National Parks). Starting as a game reserve in 1938 and becoming a national park in 1972, South Luangwa is a stunning natural habitat, home to around 60 animal species and over 400 species of bird.

In the north of the park, far from the majority of tourists, is a remote, quieter part of South Luangwa… it is here that Lion Camp is found. Lodges in this part of the park are only open in the dry season (May to November) meaning wildlife here does not have the constant presence of people and vehicles and consequently the game viewing feels wild and undisturbed.

this was no ordinary commute

Entering the park at the Mfuwe Gate, we still had a two hour drive through the park to reach camp. But this was no ordinary commute, our animal sightings started the minute we crossed the bridge into the park and spotted thirty or forty hippos lounging in the river below. Wildlife viewing continued with battalions of helmeted guinea fowls parading across the plains and an abundance of warthog, with their tails erect, trotting in every direction. Reaching camp the zebras opposite our tent welcomed us with their humphing and braying. Being the dry season, the lagoon outside had dried to a slow narrow trickle and a lone grey heron hunted in the midday sun.

Unpacking and freshening up, we were keen to get back out into the park. Within minutes of leaving camp we stumbled upon our first ‘kill’… a grey headed bush shrike having a late lunch of a still wriggling chameleon. After this somewhat macabre start, we pressed on to find a group of hornbills and coucals snacking on an army of vicious, swarming Matabele ants, whilst flocks of the vibrantly coloured Lilian’s love birds squawked overhead.

At another waterhole, a congregation of ibis fished for food and yellow billed storks waded, with beaks open underwater, stirring up the muddy water with their feet until tiny fish flopped into their mouths. A saddle bill stork made quick darting movements with his beak into the water. A great white egret, a pair of black headed herons and a couple of open billed storks stood motionless in the water, waiting for the right moment to pounce.

We stopped on the Luangwa River banks to watch the Southern carmine bee-eaters, who were just starting to arrive at their breeding grounds. Later in the season the river would become a blur of red and blue, as thousands of these bee-eaters selected their breeding sites along the steep river banks. We knelt of the top of the bank, peering over the edge, to observe them digging breeding tunnels into the carefully chosen bank. The soil needs to be sandy enough to dig into but sturdy enough not to collapse, especially when you realise these burrows can be over three metres deep. The carmine bee-eaters vivid pinkish-red plumage, turquoise crowns and streaming tails made these birds an absolute pleasure to watch.

She would eat the remains, at leisure, over the coming day or two.

Moving away from the river, a short distance away, we found a leopard in a tree, guarding the corpse of an impala she had killed earlier. Having eaten her fill, she had used her remarkable strength to drag and stash her ‘prize’ away from other predators high up in a fork in the tree. She would eat the remains, at leisure, over the coming day or two. It was getting dark by now and as we drove through the park we surprised genets, mongoose, porcupine and other nocturnal animals who were heading to hunt and forage, as we headed back to camp for our own gourmet dinner.

Out on an early morning game drive, we stopped for tea, perched high up on the river bank. Looking down, hippos and crocs crowded below us, a lone African skimmer swooped low over the water, a giraffe on the far bank made its way tentatively down to the river’s edge to drink, and elephants, like great, grey, ghosts glided across the landscape. The shrill and distant call of a fish eagle, accompanied by the background cooing of doves, completed the scene. We listened to the muted splashing as a family of elephants slowly crossed the river, wading through the shallow water, single file, with the matriarch up front, youngsters following her lead and another adult bringing up the rear. Reaching the other side they dried off with a quick dust bath and disappeared from sight. Our own tummies rumbling by then, we decided it was time to head back for breakfast, though our morning’s wildlife encounters were by no means over yet. Rounding a bend we came across a pair of mating lions, with the female definitely not backwards about coming forwards, and seeming rather demanding in the ‘bedroom department’. Around the next twist in the road an elephant stood on his hind legs, trying to reach some tasty seedpods that hung just out of reach of his extended trunk.

Passing by the ‘leopard tree’ of the previous day, we found the impala carcass, looking a little ‘worse for wear’ but still firmly wedged in the tree, and the leopard herself relaxing on the ground. A hungry hyena lay nearby, with his face resting on his paws, looking somewhat forlorn as he patiently waited, hoping the carcass would somehow dislodge and drop down into his waiting jaws… he was in for a long wait.

A solitary terrapin perched on a lump of mud by the water’s edge as we ate brunch back at camp. A mother and baby bushbuck made their way to the water’s edge to drink. Whilst we ate, we watched baboons foraging, zebras grazing, puku munching, a lonely waterbuck nibbling, all interspersed with those silent leviathans, the elephants, ambling from mud-bath to woodlands.

Mud-bathing elephants are a sight to behold. Four elephants of various sizes wallowed, bathed and drank from the water in front of us. The smallest sinking knee deep in the water as he churned up the mud to throw onto his back. After half an hour of wallowing two of the elephants lay down and rolled like dogs in the dust whilst a third, rather clumsily, wiggled her bottom from side to side, scratching it on the embankment trying to relieve an itch. Finally, trumpeting in farewell, they moved off.

After lunch we retired to the poolside to continue our wildlife watching. Two young baboons wrestled, tumbling over one another while a third watched from the wings. Central to the ‘game’ was a small, springy sapling which each contestant attempted to climb in order to claim his place as ‘king of the castle’. The high jinks and jolly japes continued, with the youngsters leapfrogging over one another and the occasional reprimand from their nearby mothers.

A moving carpet of zebra interspersed with impala and puku, stretched out in front of our room. South Luangwa has 14 different antelope species. The most numerous of these is the impala and these gregarious animals can be seen in herds all over the park. Similar in size, but much fluffier, with thick brownish-orange coats, puku are also prolific. Perhaps the most beautiful of the antelope in the park is the Kudu, with its majestic spiral horns and delicate face. Although fairly common, these graceful animals are not always easy to find with their shy habits and preference for dense bush.

Afternoon drive time and we passed through a snow storm of tiny white and pale yellow butterflies. A pride of lions lay in the shade of some bushes on the river bank. Six females and a male. Relaxing and resting, gently murmuring to one another. Another male approached the pride, brother to the male already lying with the group. They exchanged greetings, rubbing their faces against one another in a display of affection and companionship. We could have watched their interactions for hours.

I froze and held my breath.

We stopped for a final, tranquil sundowners on the river bank and then with a spotlight in the hands of our scout, we headed off into the dark. The lion pride we had seen earlier suddenly appeared, clearly getting ready to hunt. We could sense the change of mood, as their earlier relaxed mode gave way to adrenalin and anticipation. Muscles rippled underneath their skin and we were suddenly very conscious of how vulnerable we were sitting in an open topped and open sided vehicle. The eight lions padded almost silently past us, milling around the vehicle, brushing up against the front bumper and pausing for quite some time only a hairsbreadth away. I froze and held my breath. Just as I felt I couldn’t stay still any longer the pride set off again, with purpose, into the dark. A definite high note to end our trip on.

You can find out more about Lion Camp here.

You can also read about the news that Hippo cull has been licensed in Luangwa National Park here.