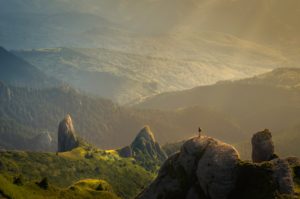 Why Philosophy is an Ideal Travel Companion for Adventurous Minds

Humans have always looked for new experiences, ways to live, things to show to others. Travel magazines are strewn with articles about visiting “overlooked” and “unknown” places.

In 2019, there were 1.4 billion international tourist arrivals globally – and, given that the planet only holds 7.7 billion humans, this figure alone suggests that a lot of us are travelling. The World Tourism Organization reports two major motivations for this – “travel to change”: the quest for local experiences, authenticity, transformation and “travel to show”: the desire for Instagramable moments and destinations.

I think both trends are fuelled by a curiosity about the unknown, the unfamiliar. This curiosity has a long history.

“That boundless ocean, which runs out into immensity.”

Throughout his Antarctic explorations, Apsley Cherry-Garrard yearns for “unknown” places. Mary Kingsley describes the “sheer good pleasure” of canoeing down an “unknown” West African river by moonlight, and delights in places “not down” on maps. A character in Joseph Conrad’s Heart of Darkness describes how “inviting” the “blank spaces on the earth” seem and tells us about his hankering for “the biggest, the most blank”.

Philosophy can also be about exploring the unknown. In one of his groundbreaking books on idealism, 18th-century Irish philosopher George Berkeley likened his investigations to a “long Voyage”, involving difficult travel across “wild Mazes of Philosophy”. Scottish Enlightenment philosopher David Hume offers similar reflections halfway through his most radical sceptical work A Treatise of Human Nature.

He imagines himself as a sailor who has struck shallow water, narrowly escaping shipwreck. Safety tempts him to remain perched on the rocks, rather than venturing out onto “that boundless ocean, which runs out into immensity”. Yet Hume decides he will put out to sea again, in the same “leaky weather-beaten vessel”.

The “philosophy of travel” isn’t a thing. It isn’t the subject of lecture courses or conferences – there are no lists of great philosophical travellers. But, as I argue in my new book The Meaning of Travel: Philosophers Abroad, travel and philosophy have enjoyed a quiet love affair for centuries.

Travellers and philosophers can both aim at pushing the limits of their knowledge – at seeing how the world is. Adventurous travellers covet new places – even Earth’s unexplored oceans and planets around distant stars. Radical philosophers craft new questions and shake old assumptions. What is the time? Or matter? Or goodness? You might think wishing for the unknown is the only thing philosophy and travel have in common. Travel involves trains, passports, luggage. Philosophy involves books, ethics, bearded Greeks. But despite their differences, travel and philosophy are tangled together. Travel has affected philosophy, and philosophy has affected travel.

Some of these reports were erroneous: reports of cannibalism were exaggerated, while – even then – China and Thailand had long religious traditions. But it was becoming clear that people across the planet disagree about ethics and religion. Locke used these disagreements to raise a philosophical question. Are there any innate ideas that all humans are born knowing? (For Locke, the answer was “no”.)

Travel is still prompting new questions today. What are the ethics of doom tourism, to places affected by climate change? Can we imagine what other, non-human minds are like? How might space travel affect us?

“Great cathedrals of the earth”

Nicolson argues this led to people perceiving big, infinite landscapes such as mountains as divine. “Great cathedrals of the earth” – as the Victorian thinker John Ruskin wrote of the Alps – “altars of snow”. Once the mountains had become cathedrals, everybody wanted to visit them.

What counts as unknown depends on your starting point. For British sailor, James Cook, Alaska and Australia were “new” lands – but their indigenous inhabitants knew them well. Roman Syria would have been unfamiliar to Chinese explorer Gan Ying, but not to the Syrians. Sometimes journeys explore places unknown to all human beings: the depths of Son Doong caves, the under-snow mountains of Antarctica, the Moon and Mars.

Philosophers can also venture into areas of thought that are new to them but familiar to others. I would have this experience if I began researching medieval German philosophy, or contemporary Chinese philosophy. And philosophers can attempt to strike out into wholly new areas of thought. I think this is when philosophy and travel are at their most fascinating: when they look to the borders of what humans do not know.