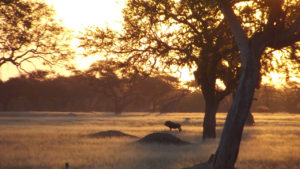 Sarah Kingdom retraces her steps, and returns to the first place that she experienced a safari with her parents, this time she takes her two teenage sons.

Thirty odd years ago, as a gawky, gangly girl in my early teens, complete with orthodontic braces and a tomboy haircut, I had come from Australia, with my family, on my first African safari. This trip was the start of a love affair with the continent that would ultimately become my home. Now, years later, and with my own two teenage sons in tow, I had decided to retrace my steps with a Zimbabwean family expedition of my own.

Starting off from the Victoria Falls we were bound for Hwange National Park, 100km away. At more than 1,460,000 hectares Hwange, named after a local Nhanzwa chief, is the largest park in Zimbabwe and has more animals and a greater variety of species (over 100 species of mammals and nearly 400 species of bird recorded) than any other park in the country. In the nineteenth century the land was the royal hunting reserve of Mzilikazi, the Southern African king who founded the Matabele Kingdom (Matabeleland), and later his successor Lobengula. It was set aside as a National Park in 1929.

Our ‘home’ in Hwange would be African Bush Camps’ Somalisa Expeditions, about an hour and a half’s drive from the park’s main gate and a short drive from ABC’s main Somalisa Camp. We had driven the 100km from Victoria Falls and were rushing slightly, as we were running a little late for lunch… holidays with teenager boys tend to be governed somewhat by keeping stomachs full. We headed from the main gate through the park. Passing a group of eight giraffe and a large herd of wildebeest, we reached the ‘Bohemian luxury’ that is Somalisa Expeditions’ camp. Alas we were indeed too late for lunch, but after a wash and some afternoon tea we were off on a game drive with our guide David.

One of our first viewings was a pair of lions snoozing after the rigors of mating. While we waited and watched, David filled us in on a little of the history of these lion’s pride. Many will remember the outrage, widespread social media coverage and petition calling for the end of big game hunting in Zimbabwe, that followed the 2015 controversial hunting death of Cecil, a lion who had lived in Hwange National Park for 13 years, and the subsequent killing of his son Xanda two years later. The female of the pair we were looking at, was a member of ‘Cecil’s Pride’ and the young male was a new male who had come in, with his elder brother, to fill the void left by Cecil’s death.

Read Next: Inside the Mind of a Lion Murderer

Sundowners were spent atop a large termite mound, with a clear view of the lions and a parade of elephants crossing the open plain. Driving back to the camp we stopped to admire the brilliant stars overhead. Considering my star knowledge is pretty much limited to the Southern Cross, Orion’s Belt and the Milky Way, and the two other passengers on our drive were from the Northern Hemisphere where all the constellations are the ‘other way up’ it was fortunate that David had a laser pointer to help him ‘highlight’ and explain the night sky above.

Although winter days in Hwange are warm with bright blue skies, the evenings can, and do, get extremely cold and overnight temperatures below freezing are not uncommon. The next morning from the comfort of our beds next door, we could hear our boys getting their ‘wake up knock’ before our game drive. Getting teenagers out of bed in the morning is not easy at the best of times, and we could hear the friendly knocking carry on for several minutes, before eventually a sleepy, muffled grunt was heard from one of the boys.

My lasting memory of game drives in Hwange, thirty odd years ago, was of being unbelievably cold. Being ‘Africa novices’, my parents had decided that Africa was ‘hot’ and, despite the fact that it was winter, had decided to leave all our warm clothes in a suitcase in Harare, while we ventured off on safari, with just a few shorts and t-shirts on hand. I had never felt so cold in my life. I still have vivid memories of shivering in the back of our open top safari vehicle at 6am, and not even my ‘teenage crush’ on our safari guide, Zack, could distract me from shivering. Fortunately, this time, I had come prepared with layers of warm clothing for the entire family. Luckily the whole safari business has also got a lot more sophisticated in the interim years, and we were furnished with fleece ponchos and hot water bottles as we boarded the vehicle making the experience a whole lot more enjoyable!

The highlight of the morning was coming across a lone hyena chewing on a month old elephant carcass. Skittish, but clearly hungry, she jumped at every sound and rustle in the undergrowth before eventually settling down. A side striped jackal appeared. Not quite brave enough to challenge the hyena, it settled down to watch, letting out the occasional high pitched call.

The air was alive with birdsong and we saw an abundance of birds on our drives. The most prominent were, without a doubt, the hornbills, and we saw them absolutely everywhere. The African Grey, Southern Yellow-billed and Bradfield’s hornbills all swooped, soared and chattered incessantly. Southern Ground Hornbills strode through the landscape with their trademark drum beating sound effect. Racquet Tailed and Lilac Breasted Rollers flitted from bush to bush. Teals ducked and bobbed in the waterholes while Egyptian Geese shouted from the banks. White-backed Vultures, Marshall Eagles and Bateleurs soared overhead.

Without a doubt our most special sighting in Hwange was as we were leaving Somalisa and driving out of the park. Having gone to sleep with the sound of wild dogs and we had woken to lion footprints throughout the camp, now, not long after setting off we rounded a corner and found three cheetahs relaxing in the middle of the dirt road. Switching off the engine, I groped for my camera, hardly daring to take my eyes off them. A female and two young males. I needn’t have panicked, they were not rushing anywhere. The female relaxed in the sand and the two youngsters gambolled and played, while we watched, entranced until they eventually tired of us and disappeared into bush.

We left the Somalisa and Hwange behind, but carried with us a whole new set of family memories.

You can find out more about African Bushcamps here.