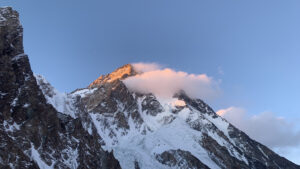 Triumph and Tragedy on K2

Fatal falls, frostbite, and friends gone missing on the mountain - I was one of the lucky ones on K2.

This mission will remain engraved forever in my mind and heart. It was a mission of triumph and tragedy – as five true climbers and wonderful people were lost but will never be forgotten.

Out of the 11 Westerners who arrived on camp 3, that fateful night of February 4th, three lost their lives.

Back In October 2020, I was in the Swiss Alps as part of my project to climb the ever 4,000m peak (all 82 of them) when I received an email from Seven Summit Treks – a mountaineering expedition agency from Nepal- inviting me to participate in the first international winter expedition on K2 (8,611m). It is well known that K2 was the only mountain over 8,000m that had never been climbed in the winter. So I thought quickly: I don’t care if I fail, but I will regret it for the rest of my life that I have been given the opportunity and I haven’t at least tried. So I immediately said yes. 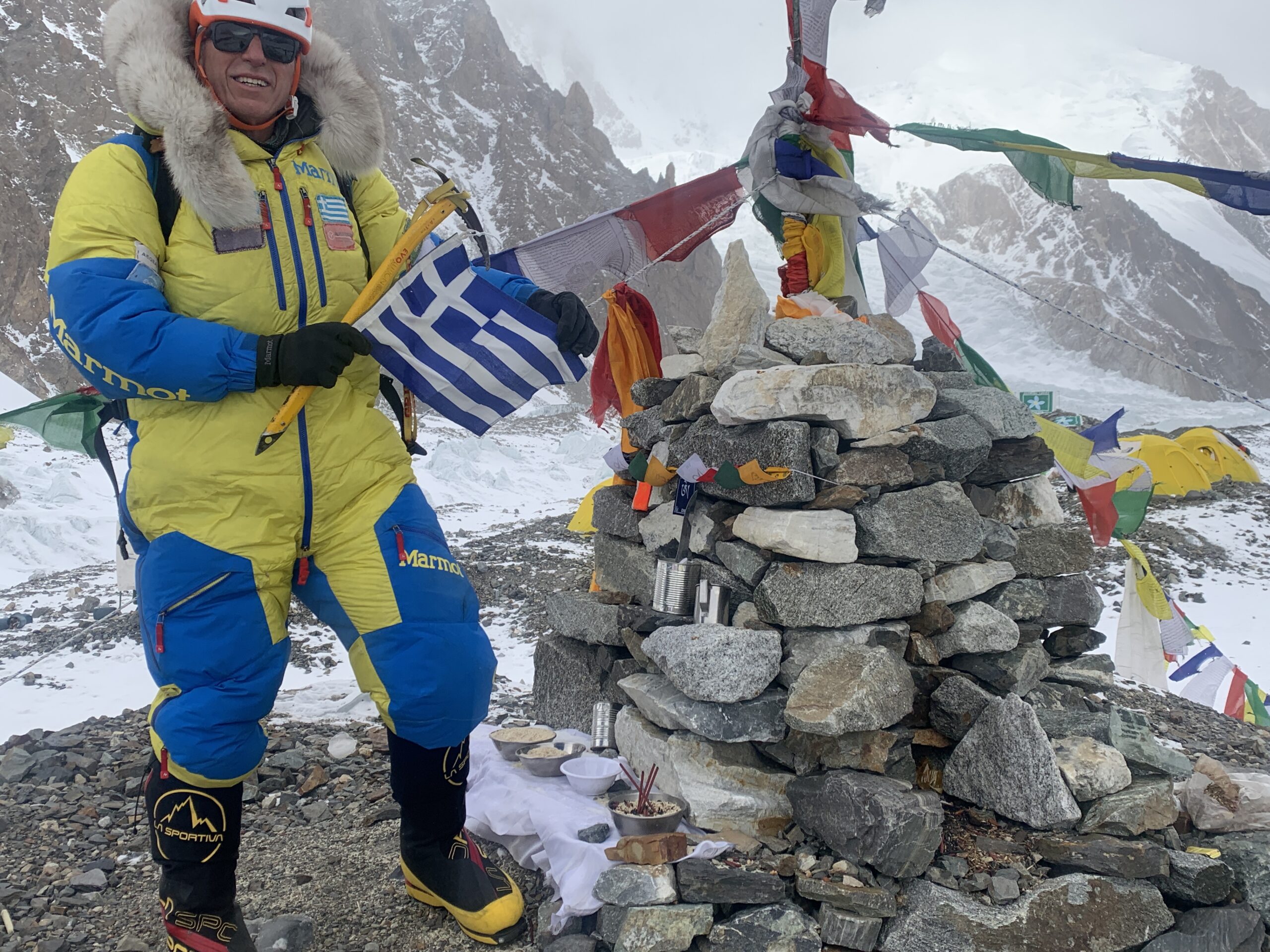 On December 20th, I was in Islamabad, Pakistan where I met the other members of the mission. We were a total of 18 western climbers and about 12 Sherpas. Together, we flew to Skardu village where we stayed for two days. We then took our four-wheel-drive vehicles and drove to Yalu through small, narrow, and often dangerous roads to the village of Askoli. After our outdoor overnight stay in Yalu, we stayed for four more nights in the area. We then started our 100km trek through the difficult and cracked glacier until we reached the K2 base camp at 4,970m.

Read next on TOJ: How our historic Winter Expedition on K2 became a symbol of brotherhood for all Nepalese people.

The cold was rough all the time during our stay in BC. The temperature was between -19°C and -29°C. After settling in our tents we began the rotation system to acclimatize. I personally reached camp 1 at 6.050m and stayed there for three nights with the Italian team. Meanwhile, there were still two teams back in the BC – the Mingma G team with two sherpa assistants as well as the Pakistani legend Alisadpara with his son Sajit and Icelandic John Snorri. The Nims team, along with five Sherpa assistants, although they moved separately, belonged to the SST group. 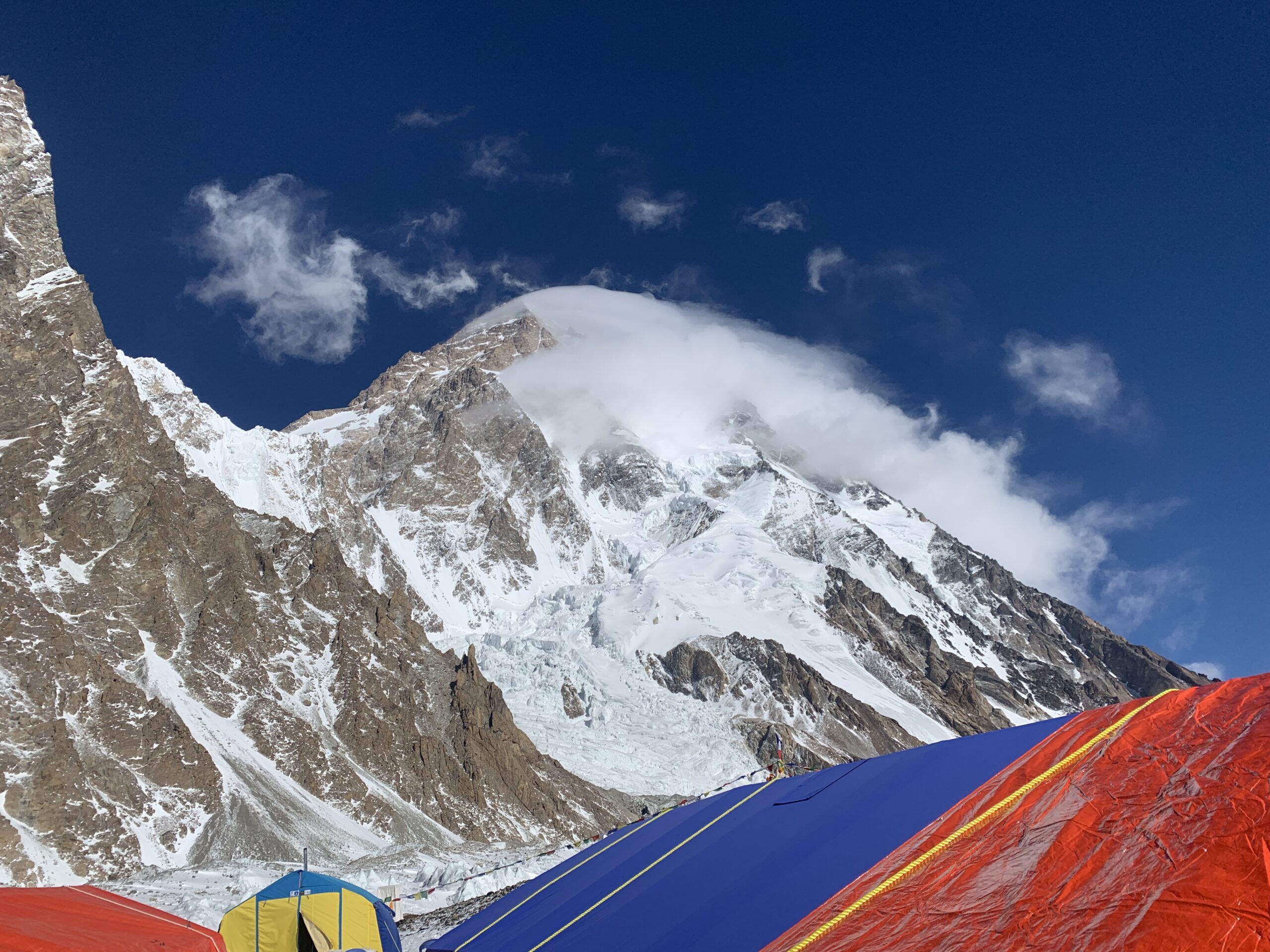 After resting for a few more days, another rotation followed with overnight stays at Japanese camp 5650m, at camp 1 6050m, and a third night at Camp 2 at 6550m.
January 16th: the day the ten sherpa reached the top of K2 and made worldwide mountaineering history! Sadly, this good news was met with a tragedy right before my eyes.

The leader of the mission, Sergi Mingnote, lost his life falling just below camp 1 all the way down to ABC. I saw him falling over the frozen crag with my own eyes and ran near him with Tamara and Alex from Romania. Unfortunately, he was barely breathing and had already lost consciousness.

We called for a helicopter from the Pakistani military but were told that they can’t fly today, only the next day. I then called for Global Rescue but before I could talk to them, Sergi stopped breathing. Soon after, Thomas from Slovenia, who is also a doctor, arrived, checked him out and told us it’s over, there’s nothing we can do.

We tied his body with a rope and put him in a tent in ABC. Later on, I asked Thomas if a helicopter was coming in immediately, would it be possible for him to survive but the doctor’s response was negative. He explained that his body had become like a jelly and almost all his internal organs were broken. In the next few days, we tried to recover from the shock.
In the meantime, Valdi from Poland, Carlos from Spain, and Alex from Romania left the BC. We were 18 people left and had more than two weeks before we began our final attempt. 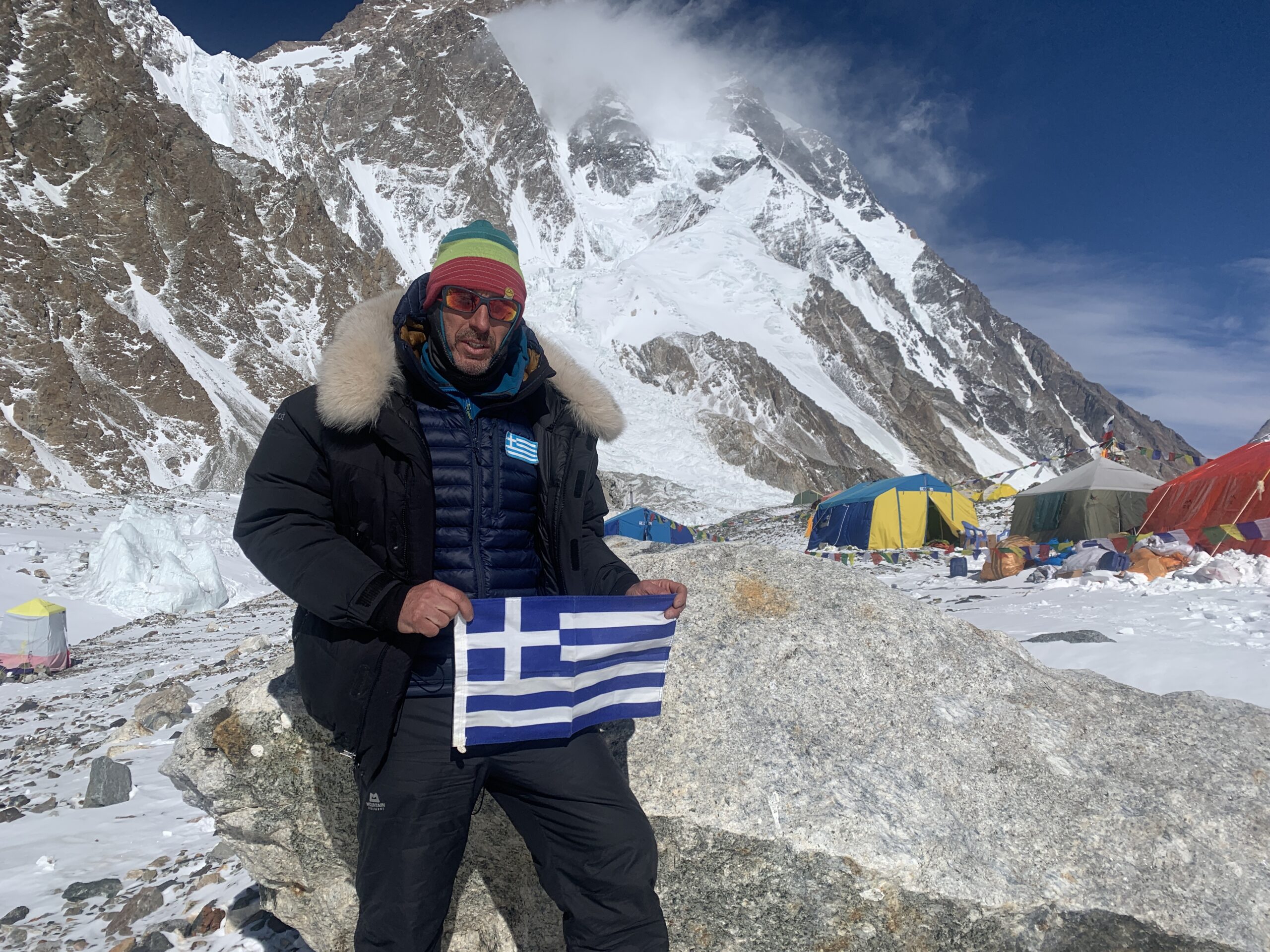 On February 2nd, I arrived at camp 1 first and, gradually, the remaining 13 members of the mission arrived too. The next day, 5 of us abandoned the mission and returned to BC. I reached camp 2, and on February 4th, I reached camp 3. Our plan was to stay there for a couple of hours to rest, rehydrate and eat and then head for the summit.

To our surprise, we didn’t find any tents there except Tamara’s tent and one tent from SST. I stayed out in the cold, at -39°C for fifty minutes, standing almost still and waiting for the other sherpa to come and bring some extra tents. My toes slowly began to freeze. Ali came in to set up his tent and a sherpa placed another tent but we were a total of 24 people and the space within the tents was for 8-10 people.

Crammed like sardines, we entered the tents and waited to see who would head for the top first. The German climber decided to go first but came back relatively quickly, with frostbite on his feet. Back in the tent, I was trying to warm up my fingers with the LPG cooking device, as they were already getting bruised from the frostbite, In the meantime, the Slovenian climber started heading for the top but came face to face with a big crack on the glacier and couldn’t go over it by himself. He met John Snorri there and they both tried together to find a way to overcome the obstacle, but couldn’t so the Slovenian climber decided to go back to camp 3. As he told us on his way back, he met the two Pakistanis and the Chilean climber but they were not all together. They had some considerable distance between them. 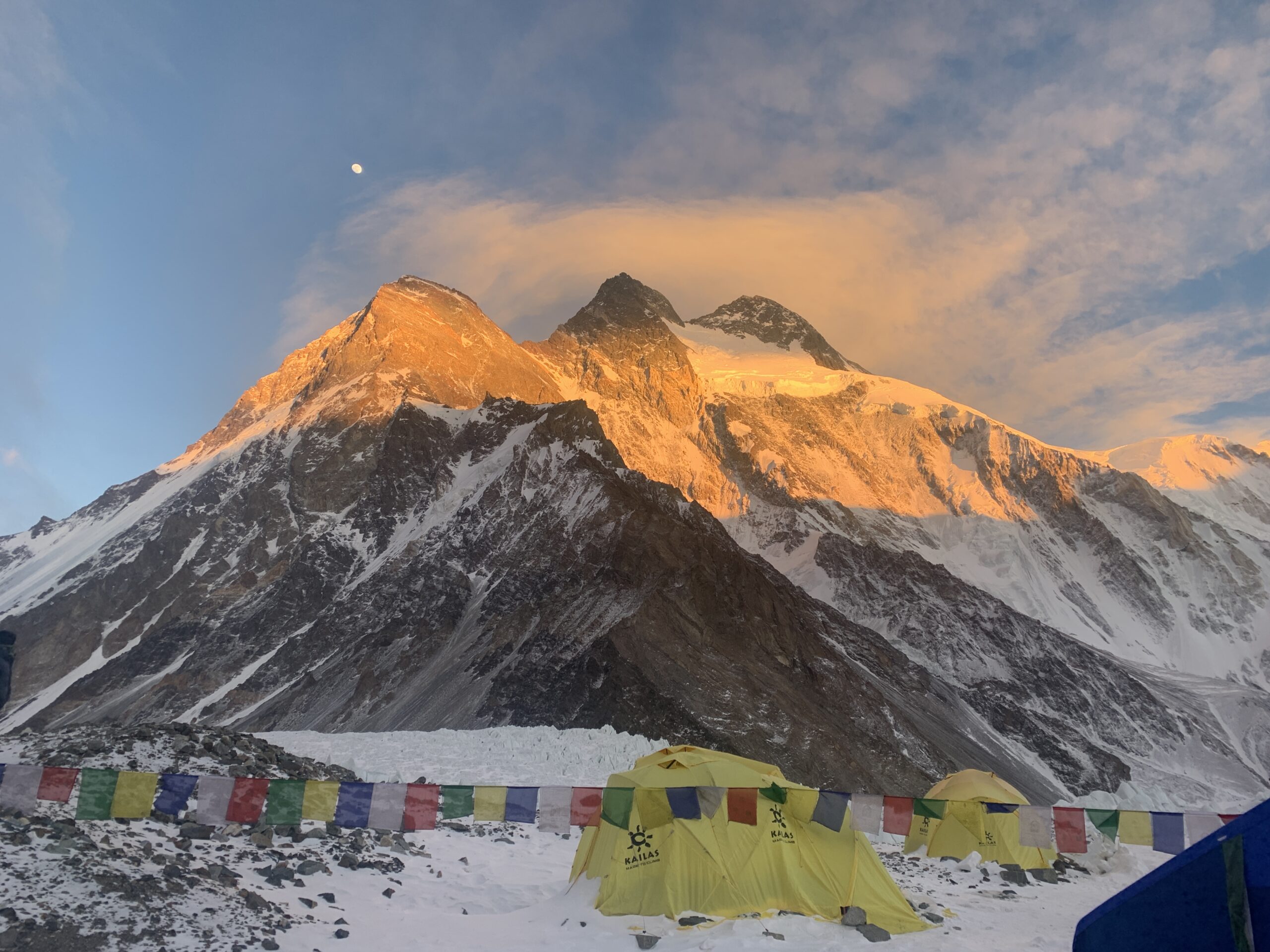 I spoke with my family on the satellite phone and with my friend Costas Gabriel, who is my meteorologist. He told me that the weather will get worse tomorrow morning as the temperature from -48°C will drop down to -65°C due to the wind and chill factor increase so it’s best for you not to try to get to the top.

“To go for the summit meant losing my fingers.”

My family didn’t want to intervene and told me that I know best what I need to do given the circumstances with the bad weather and my frostbite. However, Noel told me directly not to try to get up with those feet because I will lose my fingers. I was constantly thinking about what to do, I was in a very good mood and felt strong so I really wanted to try to get to the summit.

Read next on TOJ: Rolex vs. Smiths: Which Watch Summited Everest in 1953? Putting a Controversy to Rest

I finally decided not to go ahead and stay there at camp 3. The night was very difficult because we didn’t have sleeping bags or room to lie down and we curled up close to each other. We spent this very cold night at – 41°C trying with the gas flame to at least warm up our faces but all three gas bottles emptied very quickly. The next morning, we started descending around 10:00 a.m. while we were anxious to hear if the three climbers made it to the top. As we were descending the black pyramid I heard Athanasios’ sherpa shouting at me with a cry of agony Antonio, Athana, go on Athana, go down Athana is dead.

I was in a state of shock once again and became even more careful going down as the many different fixed ropes gave you a feeling of insecurity and fear. I didn’t know which rope to choose so I can be safe. I arrived exhausted at camp 1 and on the way, I met Thomas from Slovenia who informed him of the fall of Athana. We spontaneously embraced. 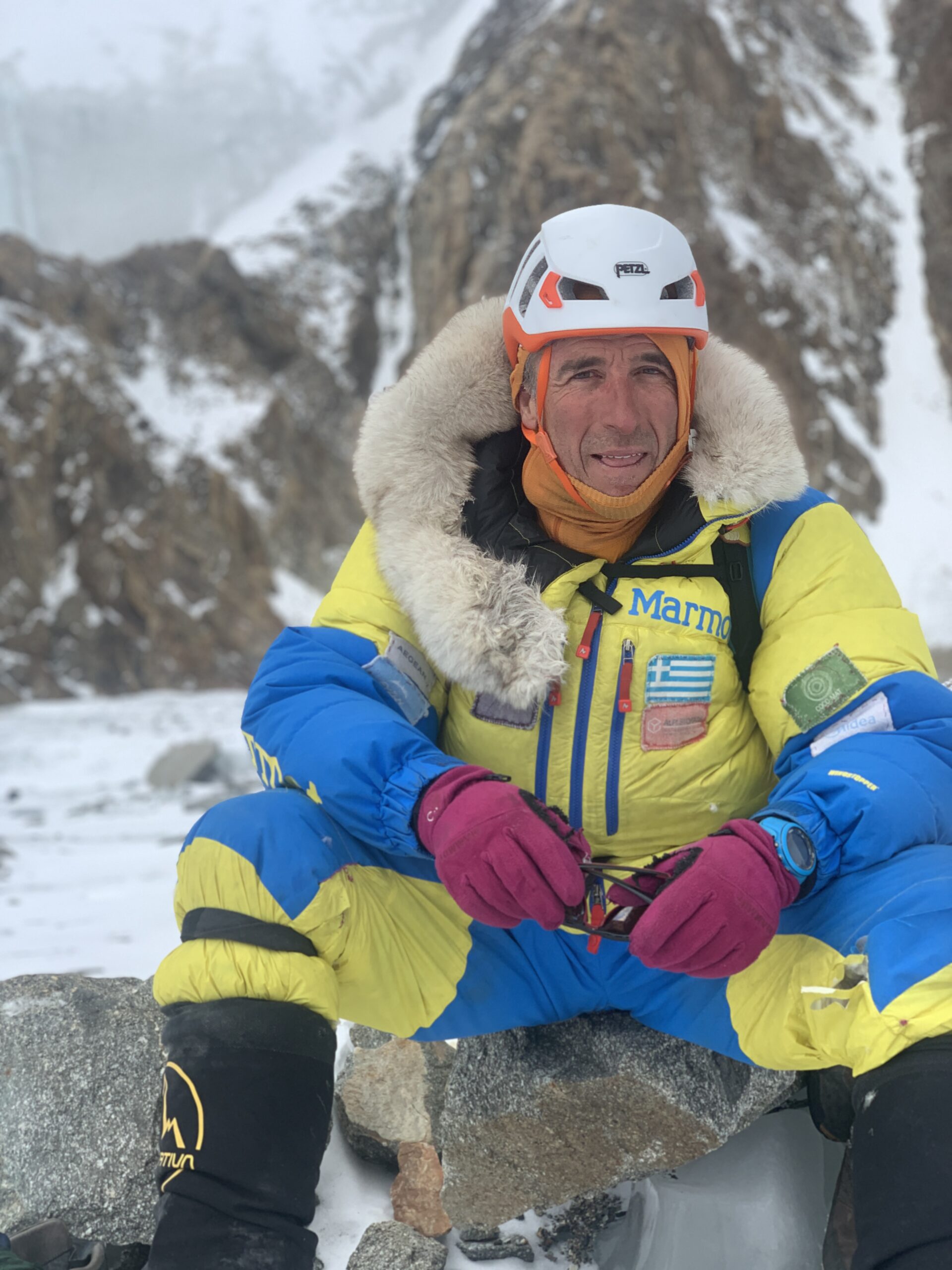 The same night I slept in camp 1 with the German climber and the two sherpa. The next morning, feeling exhausted, emotionally drained, and in great agony because we had no news of three climbers who left for the top I continued to climb down to ABC.

While In the glacier, we had two young sherpa kids waiting to offer us juice and tea. I was exhausted. I asked them about Athana and they told me that they picked him up from where he was – showing me a picture of him. It struck me that Athana was still smiling as he did his entire life.

“I didn’t know which rope to choose so I can be safe.”

When I arrived at BC, I was very moved by the sherpa, the excellent Pakistani kitchen staff, and the other members of the mission who were hugging me in tears. My toes were in bad condition. The doctor told me it was impossible to walk so many kilometers and complete the four day journey in the Baltoro glacier so I decided to call for the Global Rescue. The next day on February 7th, I flew with the German climber and Sajit for Skardu. We went straight to the Military Hospital where I and the German were treated for our frostbite with great care and responsibility, and I want to thank them all, both the doctors and nurses as well the helicopter pilots. I then flew to Islamabad and then two nights later, I was back in Greece on February 12th.

I have gained enormous experience, but most importantly I understand that we Westerners could also get to the top as long as we had a day with good weather like January 16th, as well as a better organization on camp 3 with tents. I plan to return during the summer season to find out what exactly happened to my fellow climbers, my friends, who went missing.

To learn more about Antonios Sykara’s climbing missions around the globe, check out his site and follow him on Instagram @antonios_sykaris.