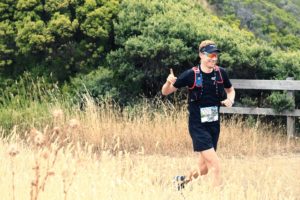 Chris White has raced 8 marathons over the last couple of months.

With his eyes set on raising $17,000 for diabetes and heart disease research, the running coach will take on another 9 marathons before the end of this year.

“I have always said to people that if it doesn’t scare you slightly, then it’s probably not the right challenge for you. It needs to be something that makes you a little bit nervous. Excited. Makes you plan. Makes you react differently,” says Chris White, determined to tackle 17 marathons in 2017. Despite an impressive pile of medals, the British running coach hadn’t taken on more than two marathons in a year’s time before embarking on his 17 mission: “I could realistically see myself doing 12 marathons, but with 17 I thought ‘oh’. That scared me a bit,” he admits, recalling contemplating this year’s challenge to explore a variety of running events around Australia.

Completing the Great Ocean Road Marathon (in under 3 and a half hours), and the Ultraman Australia’s run in Noosa in May, he also just completed the Surf Coast Trail Marathon from Torquay to Faihaven this past weekend. Even though he was not one of the 50 triathletes taking on the entire 515 km Ultraman challenge in Noosa, he paced one of his mates at the race and approaches his own mission with similar preparations. Previously, when he trained for Ironmans and half Ironmans, he noticed the benefits of complementing his running with swimming and biking. He became stronger, fitter and less injured.

Now, Chris trains almost like a triathlete, but for running events. He focuses on endurance, flexibility, and strength. He keeps swimming and a bit of biking in his routine and adds pilates and yoga to move his body in different ways, to get to know his body better and break the monotone training in the running tracks.

He hopes this varied training will keep him from getting injured and give him indications if he is about to: “My tips [to runners] would definitely be to cross train and start to listen to your body. It doesn’t really lie that much,” he laughs. “It is just us, ignoring the signs.” For example, if he is cramping a lot in the pool it means that his calves are really tight from running. A signal that he should address.

But on racing days, he better switch off and ignore some of the body signals that inevitably come when pushing the body to its limits: “You get to maybe 30k 35k and you kinda want to stop,” he says “Your body is telling you: ‘Look it hurts. Your body is aching, your feet are aching. It is time to stop this, we need to go home’.

As he pushes his own limits, he gets to know his body better: “I think that the learning that I’m getting from it [the 17 mission], is kinda like pushing the fast forward on my learning as a running coach and also runner,” he says and encourages people to do some funky challenges, that they don’t think they can do: “Do the research and speak to other people about how to do it,” he says and stresses “But don’t be afraid to try, because it teaches you so much that you didn’t even expect.

“I’m currently trying to manage the emotional ups and downs from running all these marathons and the spaces between them. I knew that might be an issue, but it hits me quite hard,” he admits.

He wants as many people as possible to join him on his mission to raise $17,000 for diabetes and heart disease research, and to learn from his experiences along the way: How he eats, paces himself on the marathons, recovers, and train.

Even though he is only a few months into the challenge, he already tunes into his body more: “I think that if I fast forward to January 2018, when I’m finished, I think that one of the biggest learnings that I’ll have is that I will be able to trust my judgement on what is going on with my body and notice the signs a lot earlier. “Even as a running coach, you feel pressure to do similar things or copy people,” he says, adding “People that I have talked to have said: ‘You must be doing 100s of K a week’ and that is just not the case.

“I’m definitely one of those people who believes in cross training, rather than just running, running, running. I tell the guys I coach: ‘It makes me nervous, if you just run’”, adding from his own experience: “When I’m training for a half-marathon, a marathon, or whatever, and I concentrate purely on running, I get injured.

“What is appropriate for me is actually to do the swimming, the pilates, the stretch and all of that, rather than going out running lots and lots of Ks. Even though most of the people I know are doing lots and lots of Ks. So it’s actually to trust yourself, know your body and listen to it. Do what is appropriate for you, rather than copying everybody else.”

“Your body doesn’t really lie that much,” he says, adding with a laugh “It is just us, ignoring the signs.”

Acknowledging these signs will be vital for him. If he gets injured, the whole 17 mission will stop. A mission that seemed far away when he set off on his first 20K race in a baggy cotton T-shirt and Newcastle United soccer shorts in Brussels. Five years ago, when he moved to Melbourne, referred to as the sporting capital of the world, he got more serious about running: “Melbourne had an instant impact on me. I started running more, signed up to races and all our friends became runners,” he says. “You can’t help get influenced by all this activity that is going on.

“I never set out to be a runner. My dad probably instilled in me the initial spark and interest. And then Melbourne has probably given me the push and the motivation and environment to do it more seriously.”

He has worked as a running coach over the last two years and recalls how it all started. He was 12-year-old and joined the old man and mates on their weekly Sunday run: “Even if it was snowing, if it was raining, sunny, whatever. These guys would meet up and they would go for their run. I always remember that I thought that was really cool and I was quite impacted by these guys running,” he says, adding “I used to go on bike with them.”