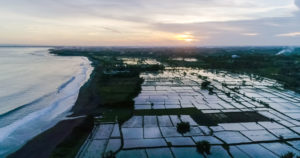 A Bule in Bali: An American in Indonesia – Part 1

White sand beaches, palm trees, snorkeling, diving, Bali is beautiful, it’s on postcards, it’s out there. Everybody knows Bali so well that some people think Bali is a country. It’s not, as it turns out; it’s an island. More specifically, it’s an island in Indonesia.

But, Indonesia on the other hand, that’s a place that doesn’t really come up much in everyday American life. China, Russia, India, sure, I know those places, I read about them, sometimes stuff that happens there shows up on my Facebook feed, I can even show you where they are on a map, if you happen to have a map.

Indonesia though, I’ve seen it on some of my t-shirt tags and that’s about it. The East Indies? That sounds familiar, from history class maybe, yeah, that’s where pirates hid their treasure. Indonesia, the 4th most populous country in the world, to a lot of us, that’s the place that had that Tsunami. Or at least, that’s what it was to me when I agreed to go live there.

See, Americans, well, some Americans, we’re just not that geographically inclined. I don’t know if it’s some sort of systemic Americanness that reprioritizes global geography to that of finger-painting (perhaps lower), or that we’re just too busy trying to keep track of all our goddamned States and Capitals. I don’t know what it is, all I know is that the schooling that this American (me) got, focused little on world geography. And I guess it makes sense, relative to the rest of the world, we’re not really surrounded by other countries. We don’t need to worry about what all those countries are doing over there—just look how much water is between us! Mexico? Canada? Yeah, I can tell you where those are, Canada’s our hat and Mexico’s our….pantalón. Other than that, well, let’s just say a mental image of a Risk board has been relied upon too many times.

This isn’t to say we’re all dumb, most of us aren’t (a lot of us are), we’re just a little American-centric is all. Do we all have our passports? Of course not. In fact, less than half of us do. But, why do you need a passport if you’re happy where you are, or don’t have the means to leave? We have a bunch of stuff here, and we can travel across state boarders no problemo (albeit sometimes not with our bags of medical marijuana, cases of guns, or crates of fireworks). But, you wanna go to the beach? Boom, we got beaches. Mountains, national parks, rivers, lakes, you name it, we got ‘em, no passport needed. So, it almost makes sense right? Isn’t it more practical to only educate our population about American geography if over half of us will never go as far as to cross the Canadian boarder? Anyways, that’s all to say that I, an American with a private-school education, college-graduated-parents, and a passport, didn’t know much about Bali or Indonesia when my friend asked me to move there with him to start a swim school.

So, I did what any geography-handicapped American would do, I googled it. I found a picture of a grass hut next to an infinite pool and a Google map showing the island. Part of Indonesia, alright, checked out the map, damn, Indonesia’s gigantic, so many islands, Jesus, where’s Bali, I lost Bali. There’s Bali, looks nice. I read some more about it, looked at a few more pictures, and concluded that: sure, I could live there. Let’s do it. “Mom! Dad! I’m moving out!”

And, we did it. We researched, we found a sponsor, we fundraised, and before we knew it, we were on our way to Keramas, a village on the East coast of Bali, to open a swim school. My friend, his name’s Seamus, is a surfer. He began volunteering as an English teacher in Keramas so that he could give back to the community there. That and he could tell everybody he was in Bali volunteering, rather than surfing his proverbial face off.

Keramas, you see, is famous for surfing, if you google it, that’s all that comes up, the village on the other hand is not famous by any means. When people travel to Keramas, they usually do so to stay at the Australian-owned Hotel that sits atop the most famous wave in the area. They eat and drink at the Hotel restaurant or one of the “local” spots within walking distance. They are shuttled to waterfalls and hiking spots. I’m not trying to pass judgement here (I am though), just trying to convey the point that very rarely do these Bules (foreigners) make it inland to the village. And that’s where we were going to live.

Seamus had been coming to Keramas for 5 years, he spoke and continues to speak, fluent Bahasa Indonesia; he knows his way around. Me on the other hand, not a word, I wasn’t even sure what the language was called. The first time I went to the morning market with him, well, if you’ve ever been to a super local market in a small village on a small island in South East Asia, you know what I’m talking about, if not, it’s crazy; a cacophony of smells and sights and sounds. Every one of your senses is bombarded with at least three things they have never experienced before—smells of flesh and fermentation and fermented flesh, and fruits bleeding neon-purple, the thwack of cleavers cracking chicken bones, a bitter taste of smoke. It’s all there, and the women—the laughing, sneering, chit-chatting women sitting there, behind their makeshift stalls, staring and pointing at the two giant Bules (both Seamus and I are quite tall) traipsing through their modest market. Your first time in the market is quite the experience, heightened only by severe lack of sleep, jet lag and a small voice in the back of your head inquiring as to “where are we, how did we get here, and what did I just step in, is it poop?”

In two weeks, Seamus will partially tear his ACL and MCL in a disastrous skinny-dipping accident. He will fly back to the States for surgery and I will be in this market using my fingers to signify how many kilos of bananas I would like to buy. I will hand the woman the largest bill I have in order to create the facade of knowing what number she said, then, I will get on my scooter, which I learned to ride days before, and drive home. My landlord will be there when I arrive. He will speak to me in Bahasa, I will understand that he is speaking to me.