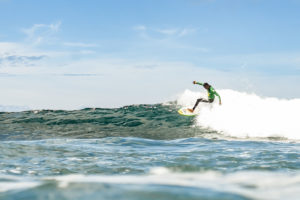 In São Tomé, a small African country, a surfer witnesses the growth of one of the youngest modern, alternative surf scenes in the world—an indigenous surf-riding culture called “corre-barra” by the locals.

I am sitting on a steep ground overlooking a nicely shaped right-hander rolling in shallow pristine waters over a slab punctuated by sea urchins and corals. Around me, a bunch of local kids approximately eight or nine years old screaming for every wave coming in and talking to me in Portuguese, commenting on how they could have caught that wave as any surf dude from any other place on Earth would do. I suddenly realized then that I just happened to arrive in one of the liveliest surf community I ever met in my life.
As we speak about the surf, a bunch of other kids appear from behind the cliffs, paddling through the channel on some very special boards. Those boards look very flat and thin. As they get closer I understand that what they’re riding is actually a local version of a bodyboard made of wood. “Corre barra! Corre barra!” the kids around me started to shout. I ask what it means. They explain it to me by pointing at the young surfers in the water. As we keep on watching the scene we see a bunch of young kids dropping on every wave with their rudimentary boards. It is surfing at his very infancy—I thought.

The surf scene on remote São Tomé is as extraordinary as its setting is exotic. I spent part of my summer surfing the perfect point breaks of São Tomé together with a small bunch of local surfers who grew up catching waves on their wooden tábuas and are now ripping on regular but usually obsolete foam boards, mostly left behind by the few Portuguese surfers that happened to pass there.

The island is a former Portuguese colony. It’s now half of the tiny twin-island African republic of São Tomé and Príncipe, the smallest country in Africa after Seychelles, sitting some 300km off the coast of Gabon. The islands present themselves to the traveller as a small African version of Hawaii, which to some extent they are, with volcanos, lush green vegetation and shallow point breaks. The only difference is that the roads are terrible and the electricity is scarce. Here tourism remains an afterthought, which made it all the more intriguing to me.

I was there not only because the waves in São Tomé were so good but also because I wanted to witness with my own eyes the vibe of this tiny African Hawaii where the invention of surfing, as I later learned, happened independently from anywhere else in the world. Yes, São Tomé as Hawaii has been one of the cradles of surfing. As for many other inventions in the history of civilization, similar discoveries happened independently in different parts of the world.

It was Sam George who first witnessed this independent invention of surfing in São Tomé. When he visited the island in 2000, the Californian surfer intended to “pioneer” its waves; what he found instead was an indigenous surf-riding culture—well and thriving—“corre-barra” as the locals call it. “Corre-barra” as I later learned literally means “ride-wave”. Wave riding, as we know it. And it has a long history on the island. No one knows when this tradition started, but kids on São Tomé had ridden hand-carved bodyboards on their bellies for as long as anyone could remember. It is just part of the local culture as much as fishing or dancing.

After that first visit to São Tomé, Sam George returned to the island in 2006 to make a film about this incredible discovery: The Lost Wave: An African Surf Story. What he found during his second visit was a small bunch of locals that started to carve their own surfboards out of wood and learned to ride on their feet. As he and his film crew left modern boards behind, a small stand-up surf community on São Tomé emerged. Surely it can be considered one of the youngest modern surf scenes in the world, but with a very long history coming from decades or even centuries of “corre-barra” tradition.

Such state of transition (or coexistence) between “corre-barra” and modern surfing created an interesting dynamic within the local community. As kids learn to ride waves on the traditional wooden boards, using them almost as bodyboards and then trying to stand up from time to time, they also climb the ladder of the local surfing community. A certain hierarchy applies here: as kids evolve in their “corre-barra” skills they also start to be entitled to use more regularly one of the few modern surf boards spread over the local surf community. The foam boards stock is limited so it is carefully managed within the community. Sharing is key in São Tomé.

Witnessing the growth—and the stoke—of one of the youngest modern surf scenes in the world it was for sure some of the most interesting experiences in my life. As my days on the island were running by, I got to know virtually everybody involved in this lively surfing community. From the pioneers, like Chum, the king of the point break of Porto Alegre in the South, to the boys of Santana, who grew up riding waves on their wooden planks and now became progressive young surfers with no less talent or style than any Californian or European young gun. Their names are Jejé, Danilk, Zezito, Ailton, Assis and Edu. I started to spend my days with them, inside and outside the water, getting more and more interested in their stories and ultimately witnessing their growth as surfers and young men.

While I was there with the boys of Santana I got to know that they were granted the chance to participate at the ISA Junior World Surfing Championships to be held in Azores, Portugal later in the year. A few surfers from Portugal who came across the surf scene of Santana – the surf capital of São Tomé – and got to know the local young guns impressed by the pool of talent and stoke decided to raise money and find sponsors to help these guys live their dream and bring them to compete at the World Championships. You can just imagine how excited these boys were about that. This was the first time travelling outside the country for them, and of course the first international surfing competition. And that was definitely what they dreamt about for all their lives. As for myself, I ended up booking a flight to Azores as well to meet them again in a few weeks’ time and to be a first-hand testimony of this modern surf fairy tale of the boys who learn to surf on some wood planks that were now going to the World Championships. That was a historic moment for surfing and a touching one for me and for all the people who helped to make it possible.

It’s not important to talk about the Championship here. History was made. And I believe that surfing benefited from getting in touch with the youngest modern surf scene in the world and for sure the one with more stoke. And vibes.

Long live the “corre-barra” tradition and to the history of an alternative surfing culture in Africa. I got back to my place with my mind full of images of stoke, happiness and loud laughs on and off the water. Long live the “corre-barra” because at the end of the day, we may find out that surfing was indeed first discovered in the Black Continent and that indeed “the best surfer out there is the one having the most fun”.