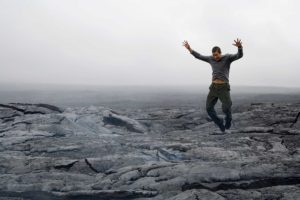 This story originally featured in a print issue of the Outdoor Journal.

Bear Grylls is probably one of the most famous adventure celebrities in the world. Aside from all his adventures, Bear also shares his survival skills with anyone ready to pay for it. One such chap was our middle-aged writer Jamie East, who usually preferred watching other people take risks from the safe distance of his television. Until he decided to go out there himself and get dirty.

Well, there’s something liberating about jumping into a freezing, fast-flowing river with all your clothes on. It’s the kind of thing that, as a child, you told yourself you’d do all the time once you were big enough and your parents couldn’t tell you off. Yet staying on the precipice at age 39, all I can think of is, “Is this jumper dry-clean only?”

This is what life does to you. It sucks the adventure from you quicker than a Dyson in a bag of sawdust. Before you know it, you’d rather sleep than live, drive than hike, sink into the sofa than swim.

I suppose this could be classified as bare survival. You exist but don’t live, and I’ve decided enough is enough. What would the 12-year-old Jamie, who got sent home from school for falling down a ravine he thought he could clear in one leap, say to me if he could see the 39-year-old me? “Man up!” probably. “Your clothes are stupid?” most definitely.

Bear Grylls is the man we all aspire to be. Hard as nails on a mountain ledge, soft as grease at home with his kids. The fire in his heart burns brighter than Krypton being destroyed, and he’s harder than a 60-foot working model of optimus Prime made from diamonds. He also embraces the outlook on life we all wish we had time for had those damned IsAs, smart phones and creamy pasta sauces not gotten in the way. Thankfully for those of us with a terminal case of lazy-itis, we can see how the other half live over at the Bear Grylls survival Academy from the bleak Scottish Highlands or the luscious surrey forests in England. Run by Grylls and his team of ex-paratroopers, the survival Academy is an ideal introduction into a world of skills and endurance we think we’ll never need. Be honest; how many of us truly believe that there will come a time when we will be skewering a rat for dinner or navigating a 23,000-acre highland with only the stars to help? But these are skills that used to be second nature to us humans. If there weren’t people like Grylls to show us the way, there are a lot of people around the world who wouldn’t have lived to tell the tale of the time their car broke down in the Australian outback, or when they had to make a snow cave that provided those few vital hours of warmth on a mountaintop. Whether we like it or not, the knowledge could prove life-saving.

The Academy offers several options tailored to your needs. You can opt for a 24-hour experience in Surrey either alone or with a family member older than 10. Although only 10 minutes from the motorway, such is the Surrey countryside that you could be in Montana for all you’d know. The dense forest makes for a real wilderness experience. The deep rivers you’ll be crossing, the rabbits you’ll be gutting, the trees you’ll be stripping to make shelter, and the ravines you’ll be shimmying across really do give you a feeling of being alive. A 20-minute run is considered a “big thing” in my house, so spending days in the real outdoors felt invigorating. I felt alive!

I’m not an all-rounder though. I found some of the requisite skills completely beyond me, navigating by starlight was one. My brain is just not wired to untangle that kind of data.

“The North Star is, in fact, the one perpendicular to blah de blah de blah babble babble wibble waffle.” That’s how that sentence sounded coming from the instructor’s mouth: just a stream of nonsense about ploughs and bears. It doesn’t look like a plough. If it looked like a plough, I’m pretty sure even I could find it. But it doesn’t. It looks like a slightly wavy line of stars that is buried among 200 billion other stars. It makes finding a needle in a haystack look like finding an elephant in an eggcup, so if I’m stuck anywhere in the world (and I mean anywhere: La Rinconanda, the Kerguelen Islands or just past the BP garage near my house) without Google maps or a TomTom, you may as well kiss this writer’s sorry ass goodbye, because I’ll wither away in a puddle of my own dehydrated tears.

But there are things that must have been festering in my subconscious all these years, like a coiled snake ready to unleash, on an unsuspecting world. For instance, I could light a fire that is neither at the end of a cigarette nor underneath a pile of half-frozen burgers. I mean a real fire created by nothing but flint and dried bark. It’s a panic-inducing task, and I’m not ashamed to say it took me nearly 40 minutes. As my instructor, Scott, told me, it’s all in the timing. Put on too much too soon and you’re buggered. Too little too late and, yup, you’re buggered.

Instructions for making a fire without matches or anything a sane human would have within arm’s reach
You need the slightest feathers of bark piled up like Candyfoss. You need your spark. Mine was from the flint on my Rambo knife. The very second that spark takes hold of one of your bark feathers, blow very gently. If all goes well, that will turn into a largish smoldering lump of smoke. If it doesn’t, go back to the beginning. You now need to start throwing on more feathers of bark, a fraction larger than the one before, before moving onto dried-out twigs no thicker than a hair on a baby’s ear. Eight hours later, you have a fire that could singe your eyebrows from 183 m. Well done!

So, if ever I do go missing near the BP garage by my house, just look for the massive fire right next to the petrol station. Well, I may need to think that through a bit more.

The Scottish Highlands course that is offered is similar to this, apart from a few key points. It goes on for five days and takes place in one of the most remote places in Britain. It’ll probably pour down with ice-cold rain for the entire trip, and you’ll have to eat rat and cross a river in your underpants. Apart from that, exactly the same.

Spending time with this team baked common sense into my brain. The lessons easily transform into mundane, everyday life. The buzz phrase of the trip is “Proper preparation prevents piss-poor performance.” out in the highlands, this means, “If you don’t prepare well, you will likely starve and die.” At home, this translates to, “Use a tape measure, or your shelf won’t be even.” The sentiment is still the same. Don’t judge me.

You should know what you’re getting into, of course. This is a Bear Grylls branded experience, after all (and all the equipment says as much). You won’t be expected to drink your own body fluids, squeeze drops of moisture out of elephant dung, or decapitate a rattlesnake with the sole of your boot, but you will feel as though you could if you were the last man on Earth. I did eat maggots (crunchy and nutty), drink from a muddy river, set traps and eat rabbit I skinned with my own bare hands. And do you know what?

I’ve never felt more alive or more connected with the world I selfishly pillage on a daily basis. I’m not alone, either.

People the world over have sought out the Grylls way of life. Upon his return to the US, my fellow survivor Caleb said “my hands are shredded, my nose is stuffed, my throat is raspy and my body is tanked, but I am alive now more than ever. It was everything I hoped for: an empowering learning experience.”

I couldn’t have said it better myself. After the aching had subsided, and the clothes were washed, the niggling feeling that I was approximately 3 percent more of a man than I was before I began, just wouldn’t leave me. It still hasn’t.

I didn’t imagine that sleeping rough, eating worms and swimming in rivers could possibly have this much of an effect on my psyche, but it really has. I’m not saying I could rescue someone hanging off a cliff, or survive in the jungle for more than a couple of hours. But if you get the chance, breathe in the air, sharpen that stick and venture out into the big, wide world. Just remember to take a compass with you. I swear those stars are out to get you.