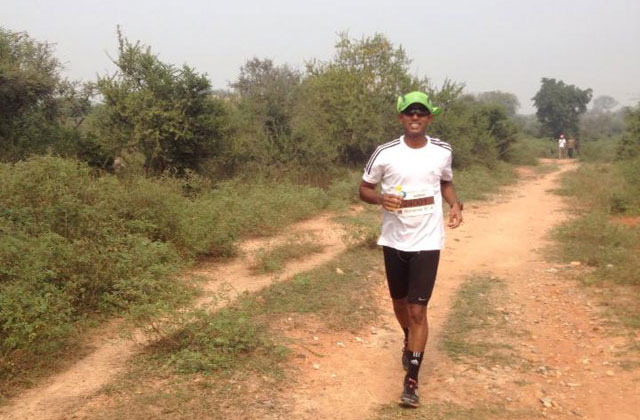 Runners in the 135 mile category, Aparna Choudhary (age 34), Bhupendrasing Rajput (44), Navin Tangiah (40), Piyush Shah (54), Raj Vadgama (46) and Vineet Aggrawal, set off on the trail at 4.25pm. With sun close to setting by 5.30pm, runners started to run the shorter route of 5km out and back, which is the norm at Bhatti for safety reasons. Aparna took a tumble in all of the first three laps, sustaining an injury to her wrist. Medics attended to her on all those occasions and she headed back on the route.

On her fourth lap, it seemed as though she had a broken wrist, with prominent swelling. Medics checked her out and found her wrist in fairly decent shape, applied some ointment and bandaged it. Another runner Vineet slipped and fell twice and his support staff took a nasty fall too. All in all, the trail seems to be one challenge this year. Earlier in the day when the organizers went to survey the route before the runners headed out, they found it to be slippery at places with loose rock and sandy soil.

“It seemed as though the runners’ blood pressure was falling loop after loop,” said Kavitha Kanaparthi, organizer of the event. Additional salt intake was suggested by paramedics.

In the initial 7hrs, runners had covered between 45-55 kms.

With only crickets for company at the main aid-station, the trail had camels, peacocks, foxes, dogs and cows accompanying the riders at night.

“The race is neither for the weak hearted nor the compromising runner,” signed off Kavitha.