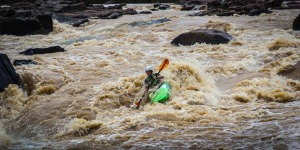 A kayaker visits the whitewaters of Chhattisgarh for the first time and writes about an epic river run on the Indravati - with steep rapids below and a stormy sky above.

As far as first impressions go, Chhattisgarh was hard to beat. We passed the police checkpoint and caught our first glance of Chitrakoot falls – a picture perfect 100-foot waterfall and every kayaker’s dream. This year, we set out on an epic road trip from southwest to north-east India with the intention of discovering India’s hidden whitewater potential. We haven’t been disappointed, least so on our unexpected visit to Chattisgarh, a new and exciting destination for whitewater kayaking.

Our journey to Chhattisgarh began in Orissa, where we were having difficulty obtaining permits to enter restricted forest areas. A tip-off from our friends at The Outdoor Journal directed our attention to its neighbour state, Chhattisgarh. After a few hours of scouting using online satellite imaging, it became clear that the Indravati river would be ideal for kayaking. It is a large river, one of the major catchments in the area. After cascading over the impressive Chitrakoot falls, the river loses gradient evenly for over 40km.

Tired of waiting for papers in Orissa, we decided to set off immediately and within hours, we arrived in Jagdalpur, where we stayed for the night. In the morning, eager to get on the river, we set off for Chitrakoot. The waterfall was just as impressive as the pictures we had seen. Unfortunately, it was significantly larger than we had anticipated and so it remains unpaddled, waiting for one of the world’s leading kayakers to claim the first descent. Despite this, we couldn’t resist the photo opportunity – a small track leads directly to the lip of the waterfall with just enough room to park our Ford Endeavour. We were expecting some resistance from the Army officer, but he was as excited by the idea as we were. We were joined in the car by the entire garrison – and took what must be the best picture of the trip so far. We camped in a field close to the falls and cooked a meal by starlight, bolts of lightning illuminating forests on the horizon. Waking early, we set about finding a clear path down to the river. We walked through paddy fields which eventually gave way to thick jungle. Arriving at a cliff, we followed a stream under thick branches to the river. Up close, the river was much wider than we had expected, the waves and holes large and powerful.

Setting off in pairs, we soon realised that the first day of paddling would be a serious undertaking. We understood from our research that the first 10 km was the steepest, the rapids following on almost without pause. The section from Chitrakoot to the bridge further down would be ideal for commercial rafting – an opportunity for any budding outdoor enthusiast/entrepreneur.

After several hours of difficult but entertaining whitewater, we decided to call it a day. Within minutes, we had found one of the most beautiful campsites I had ever seen. A pristine beach island, separated from the mainland on each side by 50 metres of fast flowing water and dense jungle. We set up camp and cooked a meal as the sun set over the water. Sitting round a fire, we watched as a lightning storm approached. Eventually crowding under our shelter, the storm passed directly overhead. The gap between the
lightning and thunder became shorter and shorter until they merged, shaking the earth as they struck.

We rode out the storm under our paper-thin flysheets until the clouds passed overhead and clear sky broke through again. Waking with the sunrise, we couldn’t wait to see what the river had in store. We paddled another five km of exciting whitewater until the river flattened out, breaking into several channels which weaved their way through the jungle. Just as we began to discuss how the large pools and flat rocks would be a perfect habitat for crocodiles, a small green head broke the surface one meter in front of our boats.

Hurriedly, we paddled backwards and clustered together, our eyes fixed on the water. The head appeared again, at which point we realised that it was no more than a few centimetres long; a baby crocodile hunting for fish in the eddies. Our breathing soon returned to normal. It was our first and as yet, only sighting of a wild crocodile in India – a privileged experience. The river meandered through the widening valley until we reached the take out, an impressive concrete bridge spanning the river 50 metres overhead. Tired, aching but ultimately satisfied, we loaded our kayaks onto the roof and begun the short drive back to Jagdalpur.

The Indravati in Chhattisgarh became an instant classic stretch and we’re confident that ours will not be the last descent. We look forward to our next opportunity to visit this great state and see what else it has to offer!