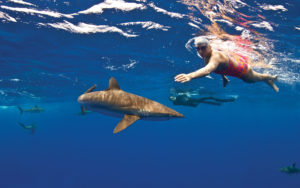 On a balmy October night in 2014, in the dark tropical waters of the Bahamas, a 29-year-old swimmer made her last few strokes to enter Nassau, capital of the Commonwealth of the Bahamas.

Chloë McCardel swam 126 km across Exuma Sound (a body of water in the Bahamas) in the Atlantic ocean from South Eleuthera Island to Nassau in under 42 hours.

In doing so, she became the first person in the world to do the longest, solo, nonstop, unassisted marathon swim in ocean water.

“Open water swimming is a wild sport,” says the world-record holder. “You challenge yourself, you challenge Mother Nature, because you have no clue what conditions you are going to get! I mean, conditions change dramatically in a day!”

Although 42 hours of non-stop swimming in the tropical waters of Bahamas caused exhaustion, dehydration, and exposed her skin to sun and stings from the poisonous box jellyfish, this has been her most rewarding swim so far.

“It fulfilled my most primal goal of challenging the boundaries in open water swimming,” she says.

Apart from being a world-record holder in the longest solo unassisted marathon swim, Chloë also has major achievements on the English Channel. A 560km long body of water separating southern England from northern France, the English Channel varies in width—it is 240km at its widest and 32.3km at its narrowest in the Strait of Dover. Those attempting the Channel mostly swim through the strait.

Chloë’s first encounter with learning to swim came about when she was ten, in an indoor pool. The youngest of four siblings, she loved sports and was looking to break into a league. She sped through all levels in a year, leapt into the squad team and began competing.

“I liked the discipline, the structured environment. I was in a squad, I had a coach, I had sessions, and rules for swimming. It all helped me focus better..”

When she didn’t crack the elite rank of senior swimmers in competitive swimming, she gave up on her dreams for a while. But she missed being in the water. College introduced her to the world of triathlons, where she got acquainted with open water swimming for the first time.

“I used to be great at the first leg of the triathlons! I was really strong from my swimming experience and the length never seemed long enough!”

“And I really enjoyed being in that open environment where there is no chlorine, no lines, there’s more freedom. It was more natural, there were more variables. You didn’t know what the water condition was going to be like…it could be choppy, it could be flat…It was a new challenge, as well as marrying my strengths from years ago..it was kind of like, maybe it was destiny.”

She participated in a marathon run in 2006 (3hrs37min), and discovered that distance was her thing.

“I was pushing myself and and I gelled with the environment quickly. I thought, rather than trying to be faster, I should just see how far I could keep going!”

“It has been an eternal evolution to see where the next bar is.”

She attempted to swim 166km non-stop and unassisted from Cuba to Florida in October 2013, but had to abandon the swim after 11 hours because of severe box jellyfish stings.

But she never gave up trying. One of her biggest motivations to attempt world records has been to push boundaries.

“There were some voices in the community that said that it’s just not possible to swim that far without a stinger suit. It’s not assistance but it is necessary. That was the argument,” she says.

“I went to challenge that theory, and proved it wrong! Yes, you are more exposed to the elements when not wearing a stinger suit and it’s harder. I wouldn’t have had the severe burns or at least the amount of jellyfish stings from box jellyfish which are highly venomous if I had worn a stinger suit. But the thing that matters to me is that you don’t do it to find the easiest way to do it, you do it to challenge yourself in a challenging environment.”

“The consensus has now moved back to where it was before the debate began—follow the English Channel rules, which were set over a 100 years ago which is just to keep your bathers, goggles and cap. In fact, after my record-breaking swim, there has been a clear-cut distinction between assisted and unassisted swimming,” Chloë says.

Your role model(s)
Gertrude Ederle- Gertrude was an American competition swimmer, Olympic champion, and former world record-holder in five events. On 6 August 1926, she became the first woman to swim across the English Channel.

What are you training for next – It’s a secret 😉 Something long….

Chloë was awarded the Marathon Swimmers Federation 2014 & 2015 Solo Swim of the Year (Female). Future plans? “I want to continue coaching, get people excited about swimming.”

Check out Chloë’s website for more info about swimming the English Channel with her:

This story was part of the Opening Feature section of The Outdoor Journal Summer 2015 edition of the print magazine.