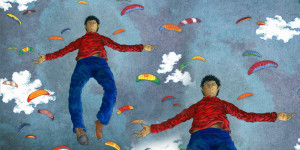 Clearing the Thermal of Death

Adie Kumar was India’s first competitive paragliding pilot, till his life was nearly snuffed out in a flying accident three years ago.

He returned from the jaws of death but may never take to the skies again.

From interviews with Adeep Kumar

The majority of people who’ve had a near-death-experience usually recall what they went through. But former Indian paragliding champion Adeep ‘Adie’ Kumar doesn’t remember the moment he died and was resurrected.

One of India’s top paragliding pilots, Adie was flying in competition in a remote Russian province in 2012. But competition paragliding is dangerous, the wing narrow and gossamer thin, prone to collapses. Adie crashed… and died for about five minutes.

Seeing him crash, a paraglider who happened to be a doctor, landed just in time, administered CPR and brought him back to life.

A brain contusion caused by the impact to his head erased every memory of the accident, the out-of-body moment he may have gone through, and his competition days.

Three years later, 50-year-old Adie is paralysed on the right side of the body and slurs while asking for a glass of water. The competitive paragliding pilot once known for his daring aerial abilities is now wheel-chair bound. But the will to live and recover is etched on his face.

His friends describe his life as one of mental suffering triggered by a string of failed marriages and relationships, intense meditation to realize his being and calm his consciousness, freak paragliding accidents, and looking to get away from it all by cocooning himself in a harness and taking to the open blue

“Everything about Adie has changed. Physically, he is not even a shadow of his past…but the gleam and grit in his eyes remain,” says Gurpreet Dhindsa, a paraglider and a mutual friend.

Gurpreet, India’s top-ranked competitive pilot today, has just returned from Macedonia after participating in the Paragliding World Cup. In his bag is 700 euros in cash and a yellow T-shirt with signatures scribbled across the back. We’re visiting Adie in his house in Faridabad, North India.

“The money is a donation from the paragliding community for Adie’s ongoing treatment. They have also sent an autographed T-shirt wishing him a quick recovery,” says the veteran paragliding instructor.

As a journalist, it is a tough interview to conduct for me as the subject is a rare one who came back from the dead, has the most intriguing life story to narrate about paragliding exploits. Alas, he cannot utter a word due to paralysis and loss of memory.

Dhindsa holds the T-shirt up for Adie to see in the evening light. He squints while staring at the signatures and as he recognizes some names he slips out a smile of approval.

Gurpreet and Adeep’s camaraderie appears to be old except that it is not.

“We were not even best friends during our flying days. We were team-mates and also competed against each other. In fact in the initial days I thought he was full of himself,” recalls the paraglider.

Best buddies or not, he is the only one of the few with the most insightful details of the former paragliding champion’s flying days and in particular, about his accident at the mountain dominated Republic of Altay, a federal subject of Russia. The Altay Mountains are a mountain range in East-Central Asia where Russia, China, Mongolia and Kazakhstan come together.

“At the time of the accident Adie was at the peak of his flying. He was not only a good competition pilot but also an exploratory paraglider. His take off on competition day was fine but the start was not so good. And in order to make up he decided to take a shortcut via the middle of the valley instead of going along the mountain like most pilots were doing,” says Dhindsa. Adie is within earshot distance but he doesn’t react to the narrative.

Adeep lost control of his glider in a low drift turbulence, had an asymmetric tuck1 with a cravat2 and spun downwards, crashing with a thud in the valley. His helmet cracked on impact and his body was as immobile as his glider.

“The doctor told me that his vital organs had failed and that he was lifeless. After his CPR-aided revival, he was under treatment at a clinic in Atay’s capital- Gorno-Altaysk. He was in a coma due to spinal injury and cerebral edema. The surgeon then advised shifting him immediately to Moscow for medical treatment by specialists,” Gurpreet adds.

Adeep’s 84-year-old mother Vidya Devi’s tears keep filling her eyes, seeing her son in a state of limbo for the past three years.

“He always lived life on his terms and never harmed anyone. I think that be it in the sky or on the ground, he always had a spiritual quest and was keen to help others in any way he could. Now, he needs to help himself…”, her sentence chokes to an end.

Adeep, a national level swimmer and a black-belt in Karate, was introduced to paragliding in the mountains of India, but soon moved to Australia where he got his pilot license. He was the first Indian to start competing and participating in the Paragliding World Cup circuit.

His repeated crashes, including one when he got trapped in a tree and was left hanging for two days, caused for his family to bicker about his injury-prone lifestyle. But these also brought forth the spiritual side in him that helped him heal, and led him to friends who would stand by his side at the worst of times.

Kyoko Hayashi is one such friend in Adie’s life. A polarity therapist, 38-year-old Kyoko traveled to Altay and India to help him settle down and assist his healing process.

“We met in Japan as he wanted to learn polarity therapy. Then Adie left for Turkey, met with an accident and returned to Japan for treatment. His view was that the physical pain he endured took the brunt of the emotional trauma he underwent”, Kyoko says during a drive from India’s capital, New Delhi to meet her friend.

During his traumatic cycle he was led to the doors of ‘Santh Math’ (path of saints) a spiritual sect whose leader appeared to Adie when he was injured and in a coma. “He meditated a lot. Adie knew some alternative, spiritual healing methods and these came to his assistance when he helped other pilots heal faster from their injuries”.

She recounts a dream Adie had in February 2012, while he was battling Hepatitis. In the dream he falls from the sky and lands in a remote area of Russia. Hovering around him are people resembling paragliders. At that moment his spiritual guru, Rajendra Singh appears and leads him away.

Among the local folklore that surrounds his paragliding exploits includes Adie’s pet project to glide across the Himalayas3. Today Adeep Kumar works hard to overcome his disability as much as he did to turn himself into a world-class paragliding pilot. His sustained physiotherapy is helping him take baby steps to recovery. His happiness doesn’t lie in the sky, but in his complete recovery on terra firma. His disinterest in gliding is apparent when I tell him India will be hosting the 2015 Paragliding World Cup.

A friend of his recalls that one of Adie’s words to the young pilots he used to coach was that “life on land reflects life in the air, so be happy on the land, otherwise it will have its effect in the air.”

The Outdoor Journal appeals for contributions that can help Adie Kumar purchase a motorised wheelchair for easier mobility. Please write in to: editorial@outdoorjournal.com

1 An event that occurs when one side of a paraglider’s wing loses its loading and is no longer a rigid airfoil. They are a result of turbulence in the air mass a paraglider is flying. the most common occurrence is when a pilot is flying in areas of thermal activity.

2 When one wingtip of a paraglider become stuck in the lines/cascades. This often happens after an asymmetric tuck or collapse.

The story is a part of the Life and Death column of the Autumn 2014 issue of The Outdoor Journal.