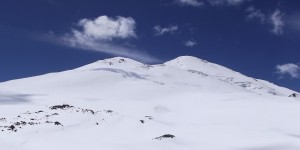 This is a climber's account of her first attempt to summit Elbrus north side, a tougher route than its southern counterpart, well known for its deadly terrain and brutal weather.

My decision to climb Mt Elbrus was rather last-minute. I’ve been climbing and guiding for years, and I regularly guide trips for an Indian company run by a friend of mine. When my friend told me that he was headed to Elbrus with two guys I had climbed with before, I decided, with the help of some generous sponsors, to join them.

The route from the north

At 5642m (18,510ft) Mt Elbrus, an inactive volcano, is the highest peak in the Caucus Mountains, a mountain range which straddles Asia and Europe. It is also the highest mountain on the European continent and hence one of the coveted ‘Seven Summits’ (the highest peak on each of the seven continents); Elbrus is in fact the fifth highest of the seven summits. The mountain has two almost identical peaks, the west summit at 5,642m and the east summit at 5,621m; we would only decide which peak we would attempt once we were on the mountain and could assess the conditions; but we knew that reaching either summit would count as a successful climb.

There are two main routes to Elbrus’ summit, the normal route from the south, and a more precarious and challenging route from the north. we would be attempting to summit Elbrus, north side. Elbrus is not a technically difficult mountain, but it is notorious for its brutal and fickle weather, including strong winds and freezing temperatures. As we were to witness ourselves, the weather on the mountain can change from sunny skies to a total whiteout and blizzards very quickly. The weather, coupled with the elevation, can create problems for any ill equipped or inexperienced climbers. The mountain is known as one of the deadliest, and every year there are between 15 and 30 deaths. This season, we learnt, four people had already died on the north side of the mountain, and the season has only just begun: one climber died from high altitude pulmonary edema (water in the lungs), one suffocated in his tent following its collapse in heavy snowfall, and two climbers simply disappeared.

So here we were, a team of eight climbers (2 Russian, 1 Norwegian, 3 Indian, 1 Hungarian and me) at base camp. We couldn’t even make out the outline of the mountain above us that we were here to climb. After lunch we hiked to nearby mineral springs that were too cold and unappealing for us to swim in. They were occupied by some ‘generously proportioned’ Russian men who didn’t seem keen that we join them. We left the ‘swimmers’ and hiked back to camp, had dinner and headed off to our tents to sleep, the next day we began our acclimatisation hikes to prepare ourselves for the mountain.

The following morning we woke to views of Elbrus, towering above us. Our first acclimatisation hike was straight up towards the mountain, a four hour round trip to ‘Mushroom Rocks’, 600m altitude gain above Base Camp. The route was pretty straightforward and we quickly accustomed ourselves to the first half of the trail.

On day two we headed up again from Base Camp, this time for a four hour climb all the way to High Camp. Unlike in the Himalayas, on Kilimanjaro and a number of other mountains, there are no porters/sherpas on Elbrus. Climbers have to carry their own gear (unless they are prepared to pay a premium to the guides). Our climb to High Camp was what is commonly referred to as a ‘load ferry’ trip, where we would drop off much of our equipment’ including snow boots, ice axes, crampons, and harnesses; all of which would be needed on our summit attempt. The following day we would return with the balance of our gear and settle in to prepare ourselves for the summit bid.

High Camp on the north side of Elbrus is at an altitude of 3,800m, approximately 1,820m below the summit. The camp has a breathtaking and uninterrupted view of the mountain above. With all my climbing expeditions in the past I have slept in tents, no matter what the weather conditions. In fact I once spent five days stuck in a tent on a mountain during a blizzard in the Himalayas; on Elbrus however we were to sleep in what are commonly referred to as ‘barrels’. It doesn’t look like a barrel, and is in fact an insulated metal shed, that has been divided into compartments internally, to provide enough space for the twelve members of our group (including guides and cooks) to  sleep, two to a compartment, on the floor. We were to spend four nights at High Camp, counting the night we would set off for the summit.
Our time at High Camp was spent acclimatising, practicing various climbing, rope and glacier skills, trudging around in the snow, and lots and lots of eating (I’ve never eaten so much chocolate in my life!). Night three in High Camp was the night we would set off for the summit. We spent the day alternating between sleeping and looking up at the mountain attempting to second guess the weather conditions we would face. Lunch at 3pm, then sleep, dinner at 5pm, partially dress for the mountain and get back in sleeping bag, more sleep, wake at 11pm, finish getting dressed and ready with all gear.

Our guide appeared and told us the conditions were not favourable for the climb. His motto was “If I can’t see the summit, I don’t set off for the summit” and we most definitely could not could not see the summit that night. We had a spare day up our sleeves for a summit attempt, however we knew the conditions were forecast to get worse in the upcoming days. As there were a fair number of experienced climbers in the group we convinced our guide to let us make an attempt, and so at 12.30am we set off.

It took us almost twelve hours of nonstop climbing to reach the summit. Two of our eight-person team dropped out at 5,000m, another dropped out at 5,100m, leaving just five of us to continue. To clarify, 100m might not sound like a big distance, but in the almost total whiteout conditions we were in, with constant snow and high winds, every 100m gain in altitude took us about 40min, so when the third team mate dropped out we still had an expected 4 hours to go to cover the remaining 520m to the summit, followed by an anticipated three hours descent.

It was bitterly cold and my fingers, despite being in gloves rated to -35deg, were frozen and felt like a million tiny needles were being stabbed into them. I kept wriggling my fingers, I didn’t want them to get so cold that they went numb and I could no longer feel them. I don’t normally use ‘trekking poles’ when climbing, but our guide had suggested that in the deep snow it was a good idea to try them, he was right, but my arms weren’t used to using them and by 5,500m they felt like they were going to fall out of their sockets. The exposed part of my face stung from being constantly blasted with wind-blown snow.

My insulated water bottle was starting to ice up when I finally managed to bring it out of the depths of my rucksack. One team mate’s GoPro camera froze and stopped working, as did her GPS and tracking device. In the last few metres to the top I would walk twenty steps, rest, walk another twenty steps and then rest again. Our guide kept stressing how dangerous it was and how in the poor visibility, with numerous crevasses on the mountain, it was important not to separate. About 100m from the summit my team mate, the only other girl on the climb, was close to collapse. My friend decided he would short line her to the top (one climber towing another by rope). When we finally reached the summit the visibility was so poor that we quite frankly could have been anywhere! We had five minutes to attempt to take a few photos and then start our descent again. Fifteen hours after we set off, we reached High Camp again, ate and fell into our sleeping bags and slept.

Our expedition ended the following night with an evening of vodka drinking back in Base Camp, followed by dancing, as the Indian contingent tried to teach everyone some Bollywood dance moves, and the Russian contingent attempted to reciprocate with some Russian Rap music. Counting the climbers, guides and support staff, we were 14 tipsy people, who hadn’t washed properly for 8 days, in our down jackets and head lamps, dancing in a tent, in a field, in the wilds of Russia!

Sarah Kingdom is an IMF recognised mountain guide for  White Magic Adventure Travel. Born and brought up in Sydney, Australia, she climbed her first peak (Mt Kosciuszko) when she was ten years old. Keen to keep up the ‘family tradition’ of climbing a notable peak at a young age with her own children, but now living in Africa, Sarah took her eldest son up the highest peak on the African continent, Mt Kilimanjaro (5,895) when he was also ten. Over the years, she has done expeditions ranging from the Annapurnas in Nepal, to Kalindi Khal, Sudarshan Parbat and Kun in India, and Mt Elbrus in Russia.  She also manages an 8,000 acre cattle ranch, in Zambia, Africa where she currently resides.