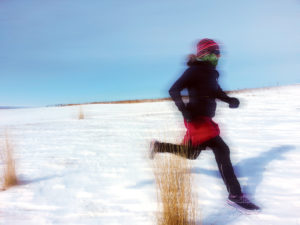 Destined to Run: How a Pro Runner was Born

How does a young, aspiring skier, became one of the best-known ultra trail runners in the world? This is Nikki’s story, from her early days of skiing in Vermont, to the lonesome summer training sessions.

“You run 100 miles?” They ask, “I can’t even drive that far.” My ultrarunning career spans more than a decade and a half of frequent and very competitive racing. The nearly exponential growth in the sport lulls me into a belief that ultrarunning is as mainstream as cricket. Yet variations to the “I can’t drive that far,” comment, remind me that for many people, long distance running remains as unlikely as interstellar travel.

So what creates the desire to run 100 miles in one stretch? I cannot answer for everyone, but I’m going to guess the seed of that particular desire begins to germinate years before it lets its presence be known to the athlete it inhabits. Other sports seem to drag people to ultrarunning. Mountaineers, skiers, field hockey players, a wonderful subset of these athletes find their way to my favorite sport. This too is the genesis story of how I became a runner.

We were a small group of cross-country skiers with big aspirations, but little knowledge of scale.  We idolized the heroes of our sport, and believed that with work, we would replicate their accomplishments. We felt destined to realize our Olympic dreams: we wanted to be the generation to elevate United States Ski Team to the top of the world rankings. We lived in Vermont, the state we believed produced all of our nation’s best cross country skiers. We never considered that any outcome shy of international ski racing fame lay before us.

We knew we needed fitness and time on our skis to achieve our goal. Fortunately both were readily available to us: in the late 1970’s and early 80’s we were the punk kids hanging out at the Nordic ski center every day after school while our parents finished their work days. The school bus left us at Mountain Top Ski Touring Center, a beautiful collection of well-groomed trails connected to a quaint country inn that generally attracted a mature clientele. Somehow the owners and staff let us build jumps, devise crazy snow games, speed down hills, and basically invent a million different methods of injuring ourselves with very little adult oversight. After a couple hours of free-form athleticism, darkness would fall over the white snow, and the lights of the ski shop would call us in. We would sip hot drinks before parents collected individual children, cutting one kid at a time from the small herd, much to the relief of the adult employees forced to endure our silly antics.

Each year we learned more about the work our Olympic dreams required. We attended training camps, where coaches explained that we should enter each winter season a bit more fit than we had the year before. During winter, the ski center brought us together, as it was the only place in town where we could practice our sport. We each found motivation in the social connections formed when many athletes train together. For off-snow training however, we had to find other motivations.

Running, roller skiing and weight training became regular summer activities, when snow was absent from our hilly, wooded landscape. Though we began working much harder, we never completely lost contact with the fun we discovered in the early days when we believed that playing soccer on snow while attached to skies would result in admission to a spot on the national ski team. Coaches explained that in order to enter the winter physically fit we must be active year-round. When the snow melted, each of us spent much of our outdoor time alone. The fun of winter shenanigans with my peers gave way to more lonely outdoor adventures.

Eventually I developed a regular training schedule: running, cycling, and completing dry land ski drills. I used roads for every run and bike ride, because that’s what everyone else did. The road that began each of my runs intersected an old logging trail, overgrown and no longer capable of supporting most vehicular traffic, but easily negotiable by something as small as a single runner. One day the lessons learned as part of a group of minimally supervised kids engaging in free-form snow games, clicked into my thoughts. I wanted to know what was up that trail. So I turned off my regular road for the first time.

I had not heard of trail running. I do not believe it existed as a sport of itself at that point.  At least it did not exist in my locale, or in my experience.  I turned off the road simply to see where the old path would lead, to add some variety to a workout that had become stale. Off the regular road I found soft, duff covered ground, fallen trees begging to be jumped and berry bushes grabbing at my shorts and tee shirt as I passed. I still had to train alone during the summer, but I had recaptured the play that marked the early days of my skiing.

Sometimes I connected with other skiers willing to train in the summer. It turned out that they had made the same turn I had done.  Some trail crossed a regular road route, and called them in as if haunted by a woodland version of a siren.  We found the play of winter in the work we used to prepare ourselves for the sport we truly loved.  We found trail running.

I never did realize my Olympic dreams. None of my original ski group ever did.  But we gained something more valuable: a life-long love of play through endurance sport. I owe a lot to that first step off the road so many years ago. As adults, society does not encourage us to play. As a trail runner though, I get to play every day, while disguising this play as maintaining fitness or training for the sport that has become my job. But in reality, I’ve just found a way to re-live my participation in the child-athlete snow games of my past, while presenting myself as a serious athlete.

This story was part of the Running column of The Outdoor Journal Summer 2015 print edition.