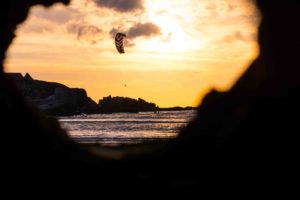 From playing in Paris Saint-Germain’s junior football team to World Championships in kiteboarding, this Parisian doesn’t do anything half-heartedly. TOJ caught up with him at the Kite-Tech in Dakhla, Western Sahara.

At the age of 16, Julien Leleu decided to become a professional kitesurfer and left PSG after four years. In 2013, he came third in the French Championship and the following year, he was in the top nine at the Professional Kiteboarding Riders Association and Virgin Kitesurf World championship. He surfed, filmed, joined and founded Light Bros and competed worldwide when a sudden injury thwarted what was until then, a smooth-sailing career. The Outdoor Journal’s Lorenzo Fornari met him after his comeback, at Kite-Tech in Dakhla, Western Sahara, where he’s gliding and pulling off his wicked tricks once again.

What makes you different from other athletes?

Maybe outrageousness. I’m always extreme in everything I do. If I start to do something, I do it fully, or I don’t do it. It’s the same with business, parties, everything. If I start to train as well, I train a lot.

For me, there was always been one sentence that has led my life: ‘Chose a job you love, then you’ll never have to work again’. In anything I do now, even if you can call it work, I surf, wakeboard and skate because I love it. I think that that you should never have any regrets. If you want to do something, if you have an idea, if you’re dreaming about something, you don’t want to regret it.

What would you say that your biggest sports accomplishment has been to this day?

To be honest, it’s coming back from my injury. It was a hard one for me because the doctors were not really positive about me getting back in the water. The accident happened when I least expected it. I broke my knee in the World Cup, when I was doing the best out of four. I had to be out of training for one year after that, trying to get back. Now, I’m back and stronger than before.

What is the greatest goal that you aspire to?

I want to go as far as I personally can and I think that I still have a lot under my feet to go. When I had the most amount of points, I was in the top nine in freestyle kitesurfing. My biggest challenge is to stay on top every day and find enough time to dedicate to all my activities. I’ve got a lot of things to deal with; I’m a professional kitesurfer, work for a video company, as well as Ride & Dream. It’s not easy all the time, but I try to “go with the flow” more and find the time at the right moment for everything. Also, the first time I entered the top ten was an achievement for me because I probably started kiting later than others. For me, just to be able to catch up on all that time I had lost was a good for me.

From Parisian footballer to surfer boy. What is the best advice you’ve ever gotten from the people around you?

My stepfather helps me a lot, he is on top of things and gives me advice. He was the French tennis team’s trainer at the Sydney Olympic Games and he has always been there for me; to let me know if I’m on the right road or maybe going a little bit too far. All the time pushing me and believing in me. My mother and father as well, but he was the one on top of things. He had the key to help me get there. I was the one who had to do it, but he knew the road.

Who inspires you? Who are your heroes?

In football, it’s Zidane. In tennis, it’s Federer. In kiting, there are a lot of different names, but I like Alberto Rondina and Aaron Hadlow. They have been examples. I don’t want to follow the same road, but they are inspirational.

How did you get into kitesurfing?

Every time I stayed with my father, when I was little, I used to watch him kiting or windsurfing, from the car. He has always been around water sports and started kiting when the sport was growing and it was really dangerous; two line guides, no security and a lot of accidents. I was around 12 years old, the first time I kitesurfed. I was playing football at Paris Saint-Germain until I was 16 and couldn’t kite as much as I wanted. When I was 16, I decided to live with my father. I started to kite every day when it was windy and entered the first kitesurfing school in the world. It was in the North of France, in Dunkerque, and it’s pretty cool.

We are at the Kite-Tech right now, in Dakhla, Western Sahara where tech entrepreneurs and startuppers are coming together around their common passion and curiosity of kitesurfing. How has it been for you?

It’s been interesting, definitely. It’s really cool to see people getting together thanks to kitesurfing and around tech. It’s not just a sport, it’s a meeting; people are getting together to talk about their ideas, their point of views and businesses. It’s very interesting to see how the sport creates a lot of interaction.

I like all kite competitions, because we’re like a little family and it’s different to any other sport. In football, for example, there’s a lot of competitions between players, and even though we still have that, we are also friends doing high-fives before and after competing. It’s good to share all of those moments because either you win or you lose, but you can always rely on the boys.