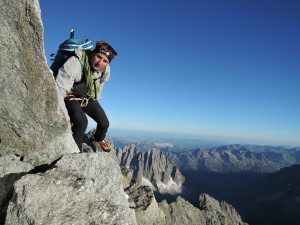 In the interview below, he talks about his motivation, the highs and lows of his journey.

It wasn’t like the 82 Summits project Ueli undertook on June 11 2015 was a new one – these were 82 of the 4,000-metre summits in the Alps, and Steck hoped to conquer them in a single push, without the use of motorised vehicles. It was all about the journey. There were highs and lows along the way, but Steck took it in his stride, and after achieving his goal in a little over two months, finally took time off to focus on his next project – ascending Nuptse (7.861m) in the Himalaya.

Though best known for his exploits in the Himalaya which include a 28-hour, solo ascent of Annapurna’s South Face (8,091m) in 2013, and summiting Shishapangma (8,027m) in 10.5 hours in 2011, the project tested the resolve of the man christened the Swiss Machine nonetheless. As he cools his heels in his home town of Ringgenberg, Switzerland, Steck reflects on the ’82 Summits’ project.

Where was the first time you thought of this project and why did you decide to pursue it?

Though the idea is quite old, I was very inspired by it. The first to accomplish it were Patrick Berhault and Philippe Magnin in 2004. The French team started on March 1 and on summit 67, Berhault fell and died on Täschhorn. The Slovenian Miha Valic first achieved the feat in a single push, without the use of any motorised vehicle, in 102 days in 2007. In 2008, Italians Franco Nicotine and Diego Giovannini finished it in 60 days.

Daniel Mader was in charge of logistics. What were the challenges your team faced planning this project?

It was nothing special. We just ensured we had all the equipment and got started to see how it would all work out. We tried to find a logical route from east to south and then got going.

Describe a typical day for you, once the project started.

There was no typical day – that was the cool thing about the project. Most of the days were spent climbing. I always tried to fill up the day – if I came down a mountain by noon, I usually started cycling to proceed to the next hut.

How did other mountaineers you met along the way react to your presence?

There was a lot of positive feedback on the way from the people I met. A lot of people were aware of the project and knew were I was at that moment.

Was it more difficult to climb a mountain or getting from one mountain to the other?

Cycling is not really dangerous. So I guess climbing mountains is more serious!

What was that one moment that you thought was the hardest?

You face some difficulty everyday, that is what makes climbing interesting. Basically I just had fun moving each day – it was great.

Sometimes I was a little tired but that was it.

In the beginning, you don’t know if it’s going to work. You need a lot of good weather to climb a project like this, so I was not sure. After I finished the Mont Blanc massif (the highest summit on the list at 4,810m, I was pretty sure I was going to make it.

From where did you draw inspiration?

I had no problem in staying motivated. I was totally driven during the project. Daniel and I are a great team, it just flows. Then again, I climbed with so many people; it results in so many different inspirations.

Your partner Michi Wohlleben injured himself in a paragliding accident while descending from the Schreckhorn Hut, and soon dropped out. Was there a change in plan after that?

Of course I missed my partner. So I had to change the project. I needed some time to find people who would come along and climb with me, and finally it fell into place.

Another partner, Martijn Seuren, fell to his death while attempting the Aiguille de Rochefort in the Mont Blanc massif. How difficult was it to continue?

I needed some time to sort things out.

Tell us how your day panned out when you were going for the final summit.

I started running in the morning from Ailefroide. It was dark. I came to a point where there were signboards for Glacier Blanc and Glacier Noir. I was sure the arrow directed towards the left for Glacier Blanc. I kept running for another couple of hours until I could see the mountain. But it was strange as it did not look like the mountain I wanted to go up. I was sure the sign was this way, so I kept running. When I reached the end of the valley, I knew I was wrong. So I checked Google maps, only to realise I was on the wrong side of the mountain and turned around. It’s almost impossible to miss the trail! But I did. I simply laughed it off and continued running. I kept telling myself it was a great detour, so at least, it was a good training day.

You missed the record set by Franco Nicolini and Diego Giovannini by a couple of days. How important was this mark for you and your thoughts on getting so close?

This project is very weather-based. So I was never after setting a new record. Each summer is different and each time it will be something new. So there is no point in comparing two feats. Otherwise I would not climb with my wife or some friends.

With Andreas Steindl, we climbed 18 peaks in one day. With (wife) Nicole, I had a nice relaxed climb up the Finsteraarhorn. I had the chance to climb with Andreas Wälchli, an old friend of mine. He is a mountain guide and we haven’t climbed together in years!

Then, I also had challenges on some solo climbs like the Brouillard ridge. And I would not miss out on the climb up Arrete de Diable with Daniel Robert Bösch and Ueli Bühler – though it took forever to climb it, this was just old friends having a good day out together!

What did you do the night you nailed your target?

We had pizzas and went to bed. The next day, we left for Ceuse to go rock climbing. Climbing in Ceuse was how me and Dani (Daniel Mader) celebrated the project.

How do you compare this project to climbing a Himalayan peak?

It’s different. Here I was moving almost everyday. It’s not about sitting in a basecamp and waiting for good weather and conditions. I did 1,17,489 vertical metres in these two month and covered 1,772 Km.

Would you undertake this project again?

Why not, though I would prefer another idea as well. But definitely the idea of doing long traverses like the ’82 Summits’ project is something I want to do more!

About the author: Shail Desai is a writer based out of Mumbai, India. His ideal pursuits involve chasing untold stories, running and writing. You can reach him at shail84@gmail.com