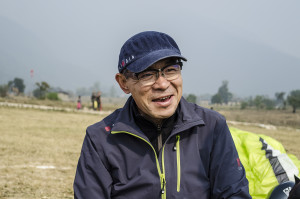 Gin Gliders is one of the most formidable names in the paragliding manufacturing industry today.

Gin Seok Song, the man behind the brand, has been flying, manufacturing and designing paragliders for over two decades.

Gin Gliders is considered to be one of the pioneers in the paragliding world. The South Korean brand has been designing and manufacturing paragliders since 1998, under the aegis of its founder and competitive paraglider Gin Seok Song and his team of skilled engineers and test pilots.

The “GIN Team” has dominated the Paragliding World Cup every year since 1998, and has had countless other competition successes in World Cups, World and National Championships. In the recently concluded Paragliding World cup in Bir-Billing, India, the GIN team clenched a double victory as they won the individual as well as the team category.

In an exclusive interview with The Outdoor Journal, Gin Seok Song talks about his philosophy and love for flying that has kept him going for the last 38 years in the industry.

Tell us about your journey. How did you start flying?

When I was at university in Korea, I would often get bored while studying naval architecture. To make things exciting I started hang gliding. Eventually it became a hobby for me and I grew into the sport and started taking part in a lot of competitions because I realized I loved flying.

You have been fundamental in the evolution of paragliding. How did you get into it?

So I had started working at the Ship Yard after university, I was working for a big shipping company called Hyundai. One fine day I decided to go to Europe to fly a hang glider, and there I saw a paraglider for the first time in my life. I decided to start designing paragliders because I knew how to design from my naval architecture background. I realized I was pretty good at designing paragliders and I was already winning hang gliding competitions. Eventually after a few years I moved to paragliding because hang gliding was not easy and feasible at that time whereas paraglider was easier to use, perhaps it is the easiest aircraft to fly.

Paragliding became my passion over time and I was doing something that I loved. I started my own company

in 1998 called GIN Gliders. Since I wanted to fly, I started designing and testing gliders for myself.  I am 58 years old now and I have been flying for the last 38 years and haven’t looked back since then.

How has paragliding as a sport evolved over the years?

Paragliding has come a long way in the last 25 years, especially in terms of performance. Gliders were mere parachutes when the sport started but in such a short span of time the performance of the gliders has increased incredibly. This worries me some time because as the performance of these gliders is increasing, I am not sure if beginners can pick up this sport. At the end of the day paragliding is supposed to be a simple sport but as the gliders become faster there may be a compromise in safety for the flyers.

How was your experience flying in the Himalayas? How is it different from flying in Europe and other places?

It was my first time in India. I mean this is amazing here and I can fly with birds! Yesterday I flew with the bird, a big vulture. That’s beautiful. I completely forgot the competition and was flying with the birds, they really they fly together!

Do you participate in any other sports other than paragliding?

I do mountain biking back home and also enjoy a bit of kite surfing. But flying is what I thoroughly enjoy. May be that’s why I have been doing it for 38 years. I am quite addicted to it and I’m still enjoying it.

What were the main differences that you incorporated in the new gliders as compared to the older ones?

How has the safety standard changed over the years and what kind of testing do you do for your gliders?

The international safety standard certificate is EN-European Norm. Every manufacturer is required to get this certification. We make a structure and do a fly test before anything.

We have different tests for different grades of gliders ranging from beginners, intermediate, performers and competition. We test features such as collapse, folds and spins. We try to make the glider as forgiving as possible. It takes a lot of time to finish a glider but if I don’t like the product I don’t finish it.

Where do you see the future of Paragliding?

I think the sport is growing rapidly. We are trying to make the gliders as light as possible because a lot of old people like me do not like heavy equipment. We are also working on new cross country flying wings. The future of the sport lies in the concept of’ hike and fly’ which will enable beginners to go on paragliding expeditions and we are working on it and I am enjoying it.

People who get into paragliding stay because it’s a crazy beautiful sport. It is more mental than physical. Once you start you cannot stop flying.