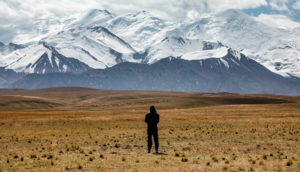 Follow No Footsteps: Untouched Climbing in the Pamir Mountains

With our rapidly growing population and the pressure that has put on the planet, we are lucky to still have places untouched (or unclimbed).

Seeking those spots is what explorers get up for in the morning. It took these climbers an expedition to the Pamir Mountains of Southern Kyrgyzstan to find it.

The population of the Earth today is around 7.5 billion people. This number is growing by around 80 million each year, and with over half of all those people living in urban environments, the sustained pressure on our dear planet has never been greater. Some would argue that the worst is yet to come.

Many adventurers would agree that as a community, they value and cherish this precious planet daily, respecting the awesome physical features that allow us all the do cool things, but also understanding the fragility that the Earth more frequently displays. The recent discussions over the changing face of Mount Everest’s Hillary Step a fine example.

But all is not lost. There are parts of our planet that remain untouched, unspoilt and unexplored. Great news for adventurers.

About 71% of our planet Earth is covered in water. The rest is a mix of solid land, some covered in the sands of deserts, some shadowed by the leaves of trees, and some rather steep and high bits covered in ice and snow. I guess that would help explain why still, in this day, there are parts of our Earth that remain unexplored and unclimbed. In the late summer of 2016, I joined a team of climbers on an expedition, a modern day voyage of exploration and pioneering adventure, to find one such place.

Our destination was the most remote mountain range in the world, the Pamir Mountains of Southern Kyrgyzstan. Our goal was to be the first people to climb, summit and name the peaks we found. In this age of immediate social updates, newsfeeds at our fingertips and a thirst for all things instant, we aimed to strip things back, slow down, drive a truck into the mountains until we couldn’t drive any further, and then hike our way into the Pamirs to see what we could climb.

We made our way to the Zaalay Range, a vast open expanse of rolling hills flanked by huge, endless plateaus and grasslands, that at this time of the year, were free from snow and so home to herds of wild horses and the occasional nomadic local living in a traditional yurt. It’s a tough environment to call home, and i’m certain even tougher when the snow comes. To the South of the grasslands, the mountains rose up like giants and formed a line of peaks that stretch all the way from Tajikistan in the West to China in the East; the mighty Pamirs. When our ex-Soviet Kamaz truck could drive no more, we set up a basecamp and proceeded to scout and climb locally from there. Our true adventure came when we set off to establish an advanced basecamp further up in the range, at and altitude of 4100m. It was here that we felt truly isolated, and like real pioneers. In collaboration with the Kyrgyz Climbing Association, and help from Google Earth, we had worked out that the mountains all around us were entirely virgin peaks, no climbing team had ever recorded routes or summits on them.

We had found ourselves a place on the planet where no human had ever been before; even the nomadic locals would’t venture this far up into the mountains.

Of course, our true aim was to make the climbing history books by standing on the summits of the vast peaks that surrounded us, and quite literally put them on the map. And so we did, with our international team successfully climbing and submitting 5 mountains, ranging between 4,500-6000m. The remoteness was liberating but equally daunting, the views stunning and the feeling of accomplishment almost overwhelming. The nights at advanced basecamp were cold, but perhaps greater shivers came from the noise of howling wolves outside of our tents most evenings! It was the local, pristine wildlife that also humbled us, with giant eagles soaring overhead, herds of Yak grazing and locking horns down by the lakes and wild horses proudly roaming the endless plains that we overlooked. It is a wonderful land, an unspoilt land, and one who’s remoteness serves it well in deterring the reaches of Human interference. There are 7.5 billion people on the Earth today, but for those 3 weeks spent in the endless ranges of Kyrgyzstan, it felt like we were the only ones. Follow no footsteps.