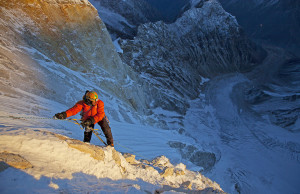 Mountaineer and photographer Jimmy Chin's exclusive story of a climb on the spectacular prow of the Shark's Fin, a.k.a

The last move was merely a mantle: Hands on the edge of a sharp granite ledge, a heel hook, and a press. When I pulled over the lip, I looked around, momentarily confused that there was nothing more to climb. I was sure there had to be one more obstacle, one more aid seam, and one more mixed pitch. But there was only sky and swirling clouds. I stared in disbelief.

October 2nd is Mahatma Gandhi’s birthday. It’s a national holiday in India. Year before last it was the day that Conrad Anker, Renan Ozturk, and I finally reached the 6,310-metre (20,700-foot) summit of the Shark’s Fin, otherwise known as Meru Central. This was Conrad’s third attempt on the Shark’s Fin’s infamous northeast buttress. For Renan and me, it was the second.

Three years earlier, the three of us battled for 19 days on the same route. The iconic mountain seemed intent to haze us. We were humbled by the sustained nature and diversity of its hard climbing.

We also grossly underestimated how cold it would be on the northeast-facing wall. Despite weathering a weeklong storm low on the route and rationing eight days of food into 19, we pushed to within two pitches of the summit. We could see it but it felt far away. To push on would have required us to spend the night out, but we knew in our current state we wouldn’t make it. We felt shattered, physically and emotionally, as we rappelled through the night to our hanging high camp.

Conrad’s personal history with the Shark’s Fin—the climber’s nickname for Meru Central’s blade of granite, deep in the Indian Garhwal—goes back decades. Of the peak’s 25-plus attempts over the last 25 years, two were by Mugs Stump, Conrad’s mentor—as a climber, and as a person. Mugs showed Conrad the ropes, literally and metaphorically, and this was his dream climb. Mugs died in a crevasse fall in 1992 in Alaska. Conrad wanted nothing more than to finish the route for his friend.

The Russian soloist Valery Babanov became the first to summit, in September 2001. Babanov estimated that 15 attempts had failed before his success, including one of his own the previous spring. During this aborted attempt, he’d been following the same line we climbed, up the prominent northeastern prow, but he turned back at 5,800 metres (19,028 feet). In September he chose a completely different line, far to the right on the ice face (see his feature article in the 2002 American Alpine Journal).

Conrad’s first attempt on the northeast prow came in 2003, with Doug Chabot and Bruce Miller. They attempted it in alpine style, climbing the bottom portion of the prow proper before exiting into ice flutings right of the main wall. Unconsolidated snow turned them back halfway up.

Five years later, Conrad recruited Renan and me for his next attempt. The main formation, he told me, featured a long alpine climb capped by an overhanging big wall that was steep enough to BASE jump. The route was perversely stacked against alpinists, since the most technical climbing, which required the heaviest gear, was near the top. All alpine-style attempts on this line up the main face had failed at nearly the same spot, the base of the overhanging headwall that starts at roughly 5,900 metres (19,356 feet). Conrad knew the climb would require the skills of a big wall climber as well as those of an alpinist.

After failing in 2008, we returned to our normal lives, haunted by those two unclimbed pitches. Yet they were a blessing. They provided motivation, and despite telling ourselves that climbing 98 percent of the route should be good enough, we obsessed privately about the unfinished pitches.

In 2009 Silvo Karo contacted Conrad about the climb. Conrad shared everything he knew, including beta on the best style to climb it in. We hoped Silvo’s team would succeed. But when Silvo didn’t make it, Conrad called with the news. It was clear that we all wanted to return.

Conrad, the consummate professional, had really good notes from his first two attempts. We pored over those notes in preparation for the next expedition, strategizing every detail down to who would lead which pitches, how we could do it faster, lighter, and in better style. In the end we chose a hybrid alpine/capsule style. We took four ropes (two lead, two static); two haul bags; a portaledge; one stove; alpine, mixed, and aid gear; sleeping bags; and food for eight days.

Back on the route, we climbed in 48 hours what had taken us six days in 2008. Over the following few days we took advantage of an ideal cold-and-dry high-pressure system. At the overhanging wall (we dubbed it the Indian Ocean Wall), which we reached after four more days of climbing, we saved time by linking aid pitches we’d done separately on our first attempt. We had a fright when one of the portaledge’s bars snapped in half, but creative splinting with ice screws saved the day. Reflecting on how prior knowledge had helped our planning, we joked about our alpine redpoint attempt, how we’d fallen right at the chains but were going to send on this go. Despite the humor, doubt clouded us every day as we re-climbed tenuous A4 and hard mixed.

On the eve of our summit bid, our charmed weather broke, and it blew hard and snowed. The wind bounced our portaledge against the wall, reminding us of the days we spent stuck in 2008. We hunkered down hoping for the best. At midnight we looked out and saw stars. It was time. Launching at 2 a.m., we flew up our two fixed lines, from which Conrad led the poorly protected mixed pitch below the summit ridgeline. The force of Conrad’s will had carried us in 2008, and it carried us again in 2011.

When we pulled over the ridge, we were blessed by the sun. At last we could face the final two pitches. The Gangotri Glacier shone far below. It was my lead, and I scrapped my way up, literally humping the knife-edge ridge to gain ground. After mixed climbing and 50 feet [15 metres] of aid, I built an anchor. Conrad came up and belayed me as Renan jugged the line below. Another 5.8 pitch, a simple mantle, and we were there.

We embraced on the summit, humbly accepting that this time Meru had allowed us passage. Our dream, Mug’s dream, had been realized.

Story and photos by Jimmy Chin

About the author: Jimmy Chin, from Victor, Idaho, is one of today’s most successful expedition photographers. His skills as a cameraman, climber, and explorer have won him numerous awards, including National Geographic’s Emerging Explorers Grant. He has made first ascents and difficult crossings on most continents and has skied Everest from the summit.

The movie of their Meru expedition was released on August 14, 2015.