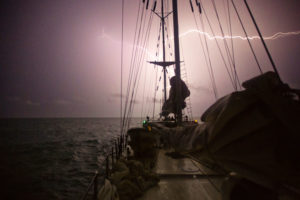 German Captain Clemens Gabriel Oestreich bought the boat as a home to explore the world. In 2014, he and a crew of dreamers set off to sail from New Zealand to Patagonia by way of Antarctica. American filmmaker Nico Edwards joined the trip. Sea Gypsies: Far Side of the World was the result.

Towards the end of Sea Gypsies: Far Side of the World, a documentary following a ragtag crew of itinerants as they pilot the ship Infinity from New Zealand to Patagonia by way of Antartica, one of the crew members, a Frenchman named Ayack, recites the first stanza of Arthur O’Shaughnessy’s famous, oft-quoted poem “Ode.” Ayack’s recitation while at the helm of Infinity embodies the spirit of the film:

We are the music-makers,
And we are the dreamers of dreams,
Wandering by lone sea-breakers,
And sitting by desolate streams;—
World-losers and world-forsakers,
On whom the pale moon gleams:
Yet we are the movers and shakers
Of the world for ever, it seems.

It is a quietly beautiful moment in a film full of icebergs, crashing waves and open spaces. And staying true to the film’s irreverent tone (there is salty language and borderline depravity to spare) Ayack adds his own addendum to the poem with a mischievous cackle: “That’s who we are, motherfucker.”

The film, directed by American Nico Edwards, is an exciting high-seas adventure. In the vein of New Journalism, a la Thomas Wolfe and Hunter S. Thompson, Edwards is both documentarian and crew member, sailing alongside guys like Ayack; Infinity’s German Captain, Clemens Gabriel Oestreich; a guy whose actual name is David Bowie; Terry, a “one-armed, tasmanian sailor;” and others. In following the eclectic crew, Edwards presents a lifestyle defined by the duality present in Ayack’s recitation: a quiet beauty, and a swashbuckling disregard for societal expectations and mores.

“I think that people are drawn to Infinity, and the sea in general because it’s a place of unparalleled freedom, where you can live a different life from what you have been told is possible,” Nico told The Outdoor Journal via email. “It’s the last of the global commons, unclaimed and wild, which due to the tragedy of the commons is also a threatened place. In making this film I wanted to broaden people’s perspective of life’s possibilities, and maybe if they know these places better, they care about them as the crew of infinity do, and maybe they will want to protect them.”

Akin to Ken Kesey’s bus Furthur and his Merry Band of Pranksters, as recounted in Thomas Wolfe’s The Electric Kool-Aid Acid Test, Infinity’s crew mixes moments of extreme poignance and revelation with goofy antics. David Bowie observes at the beginning of the film, “It’s a lot of rolling around, it’s a lot of work, you don’t get a lot of sleep, but there are those moments where you’re like ‘Wow, we’re doing the same thing that generations before were doing.’” And then there are the inane things like jumping from the crow’s nest into four-degree Celsius water, dressing up in cow suits, and singing alcohol-fueled pirate ditties.

The Sea Gypsies story naturally begins with Captain Clemens and the Infinity itself. Clemens bought the ship on a whim and began living on it with his wife and young children. But he soon decided that he and his family needed a community on the boat, so he recruited like-minded people with an appetite for adventure. There has been a rotating cast aboard Infinity ever since. A cigarette usually dangling limply from his lips, Clemens is a stoic, taciturn character; but when he does open his mouth his passion for the life he leads is easily discernable.

The journey chronicled in the film starts in a New Zealand port. The crew scrubs and cleans, hammers and sews, getting the Infinity seaworthy for its trip. The provisions for the trip, rattled off by Ayack, include 150 kilograms of pasta, 60-70 kilograms of rice, 100 kilograms of onions and garlic, 250 kilograms of flour (“We make bread every day. We make shit-tons of bread,” he says at one point), 700 packs of ramen noodles, 100 kilograms of frozen fruit and vegetables, and 2,000 eggs (which are covered in vaseline and diligently flipped every week to prevent the yolks from sinking to the bottom, coming into contact with oxygen, and going bad).

Once prepared for their multi-month voyage, the crew sets sail and assumes a life of routine tasks, icy views, and chain smoking.  “The rhythm of life aboard Infinity reflects the necessities of a sailing vessel,” wrote Edwards in his email. “Daily tasks include: cleaning, raising sails, navigating an approximate course, keeping the boat clean, cooking, maintaining an approximate course, oiling, greasing, scraping, scrubbing, disinfecting, lowering sails, killing bugs, sewing sails and of course…lots of cleaning. Once we saw our first iceberg, we added the jobs of watching the glitchy radar for icebergs and standing ice watch on the bow, where a cold lonely crew member, whilst being thrashed by waves, gazed with watery eyes into the frigid black abyss that lay ahead, hoping to see or hear an iceberg before it’s too late to turn.”

Edwards contemplates a variety of issues in his film. He touches on environmental problems, such as the incredible amounts of plastic trash on beaches, and overfishing; he addresses the whaling industry, when the crew participates in an elaborate sting operation to catch a Chinese whaling ship illegally hunting the giants; and he talks of international land and water rights when he notes that, technically, Infinity’s crew was not permitted to land where they did on Cape Adare, Antarctica.

But in between these weightier issues—and permeating the whole feel of the film—is an appreciation and wonder at the stunning places the crew is lucky enough to see, the singularly close relationships formed aboard the Infinity, and the simple way of life their expedition permits them.

“We shared the same stale non-circulating air, finished each other’s sentences, and choked down one another’s barely edible cooking made with bland, expiring ingredients and a generous dollop of love; we lived as a tribe,” Nico wrote to me.  “Being on an expedition such as this, where you live in such close proximity to the same small group of people, and can’t escape them for months on end, forms a bond that seems akin to brothers in a foxhole in war.”

Even in the film’s tenser scenes, these ideas are foregrounded. While in the midst of a two-day storm at 70 degrees south, near Antarctica, Edwards delivers some of the most compelling narration of the whole documentary: “The air is so cold that the ocean spray turns to shards of ice before it hits the deck […] Going on watch is a sobering experience. The engine is smoking white, and we are losing fuel injectors we have no replacement for. The stresses on the Infinity are at the breaking point and it seems as if everything around us is failing. Compounding our problems, the waves are so strong, they have bent back the steel anchor plate allowing water into the forward anchor locker. Infinity has taken on so much water, her bow is riding noticeably lower in the water, and she’s digging ever deeper into the waves. By all rights, we should be paralyzed with fear. Instead, we are in a collective state of awe. This is why we came here. At this moment, everything in life seems possible. Including surviving this storm.”

Come film’s end, melancholy music marks the end of the journey. On day 75, at 51 degrees South, the crew sights Patagonia. After so much time together, having survived engine failures and storms; having sipped Champagne after landing on Antarctica; having seen orcas, dolphins, seals, and penguins; after all of this, we the audience feel the bittersweet finality of seeing land just as the Infinity’s sailors do. “Infinity is possibilities for people to experience reality on another angle from what society tells you reality should be,” Ayack says towards the end. “It is a major mess, and also it is something absolutely incredible, absolutely unique. There’s no other boat in the world like this one.”

For those eager for more from Edwards, Captain Clemens and the Infinity’s crew, the next chapter is hopefully on the way. Edwards says that a sequel project, tentatively titled “Sea Gypsies: The NorthMost Passage,” will be produced as a television series. “The same boat and crew plan on sailing from Papua New Guinea to the top of the world, attempting to reach Alert, the northernmost inhabited settlement on earth, in the process sailing further north than anyone in history,” Edwards wrote in his email. “This project will have the same spirit of reckless adventure and will take the audience to a place few ever get to see, as well as experience just how much more dramatic climate change is in the far north. We sail November 2017.”

Sea Gypsies has played at film festivals across North America. Among other accolades and awards, it was named  Best Feature Film at Lookout Wild Film Festival and Best Adventure Film at Vancouver International Mountain Film Festival. For more info on Infinity, the film, and when it will be available for digital download, visit https://www.seagypsiesmovie.com and https://www.facebook.com/seagypsiesmovie.