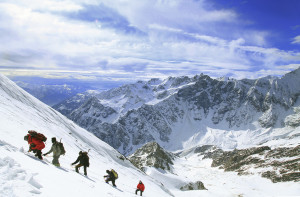 Exclusive: Everest Base Camp doctor shares his story from the 2015 quake

Major Ritesh Goel was part of the Indian Army Expedition on Everest Base Camp when the disastrous earthquake struck Nepal in May 2015, and triggered a deadly avalanche on the mountain.

He treated more than 80 people before helicopters could arrive. In an exclusive story for The Outdoor Journal, he shares his personal journey through the catastrophic event.

In 60 Parachute Field Hospital there is a saying: “Be careful what you wish for, because you end up getting an overdose of what you want”. As a young probationer I found the achievements of Major N Linyu very inspiring. She went out to explore new lands, with toil and self-sacrifice, fitted herself to become a champion in the field of mountaineering, and became the first Army Medical Corps Officer to summit Mount Everest—to imitate her was my dream.

But little did I know that after years of training in Himalayas, my dream would turn into a nightmare and I would nearly die in it. I hope through photographs, I’m able to transfer some of the excitement and sadness I felt to readers who are deeply interested. Also, I realize that there are some photographs that will reside only in my memory; they are the images I cannot share.

On the evening of 15 May 2015, I squeezed into a dome tent with a dozen other climbers, all keyed up for our journey back to Kathmandu from Everest Base Camp. We sat knee to knee on torn mattresses facing each other in the bare tent. The space inside wasn’t exactly a stretch limo; you might try not to crowd out the guy next to you, but there was only so much you could do. We sat there for what seemed like years. Every inside in my body cramped. Tight wasn’t the word. Thankfully, just about everyone inside the tent with me had showered an hour back in the heavy rainfall that had hit the Syengboche airstrip, from where we were being evacuated the next day.

At first, it was cold and to most of us who were drenched it felt like deep winter—but within a few minutes the butane gas stove was choking us and we had to crank it down. I put my rucksack down on the floor with my climbing gear propped between my legs and my down jacket on the backside. I had a makeshift pillow. I tried to sleep.

“Close your eyes, and time moves faster”, my team leader Maj RS Jamwal often quoted. I didn’t get that much sleep. As a team, we have been awake for most of the last 20 days, ever since we woke up early morning on the 25th of April and started our climb over the Khumbu Icefall. Of all the obstacles to those ascending Mount Everest, the Khumbu Icefall is perhaps the most treacherous. The last 20 days we saw terrible things and more, we lived through them.

We survived two devastating earthquakes, numerous aftershocks and the heavy rains that followed, which triggered wave of landslides from these precarious slopes in the Everest Region. This has been hard on our minds and bodies. The damage was not obvious in the euphoria of survival. But over the days, a number of cases of post traumatic stress disorder were diagnosed. Sometimes my team mates could not bear to fall asleep for fear of the flashbacks and the faces of the dead mountaineers that haunted their dreams.

In the months since then, I’ve come to realize that those twenty days in the mountains forever altered me. I think back to some of the things I’ve seen over the last three years—from Kedarnath to Nepal—communities broken through natural calamities, families broken by death and disease. I wouldn’t take any of it back, not a single second, but it begins to feel less strange to admit to being a little broken myself after witnessing it all. I have renewed respect for those of my colleagues who keep mission work up year after year, working side by side, without ever forgetting who we are and the Army Medical Corps we represent.

Friends and journalists have asked how this experience has affected me. I’ve often dodged the question by saying that it’s not about me. And truly, although a torrent of others’ pain has passed me by, I certainly felt like I was working in a war zone. For now, my team mates seem dearer, and the plight of many people strikes me as even more tragic than before this mission. In fact, for the record, I’m fine. Let’s get back to those who aren’t.

Chaos of the days

More than a hundred people arrived on stretchers, suffering from fractures and head injuries. Sadly, there were twenty dead among them whom we placed in a respectful private area. For the living I had less than three minutes for each one of them in my triage tent, sometimes a little more. During these minutes I exchanged a few words, with the ones who could talk and were conscious. “Are you okay? What’s your name?” I asked. It’s a strange phrase. Despite their exhaustion and fear, they had arrived, they were alive. They smiled. Many also thanked me.

My fellow team mates assisted with the difficult task of carrying patients across the terrain. All who helped had already been through a traumatic experience. A wonderful team of skilled people also began to assist—mountain guides, doctors from other climbing teams, and many others. We worked to quickly triage, carry out life and limb saving interventions, provide pain relief and the best compassionate care we could to all. A careful search effort through the devastated camps brought more patients. A huge effort was needed to transport all our patients to the makeshift hospital established in a kitchen tent, a good 500 meters trek away from our damaged middle section of the Everest Base Camp, at 17590 feet. In the makeshift hospital tent we cared for over 80 patients, including 25 with serious life-threatening injuries.

Throughout the evening and night, I stabilized and treated the patients who had suffered head injuries. We had enough medications and medical supplies, courtesy the extra medical funds received by the MT Dte and AFMSD, Delhi. It was a long night and we worked hard. Everywhere I looked, there were doctors and mountain guides from around the globe. They all worked incredibly long hours, helping the relief effort out of the goodness of their own hearts. I saw a Sherpa die two meters from where I was standing. We spent minutes doing intensive revival work, giving CPR, adrenaline shots, basically demonstrating the relentless commitment that goes toward saving a life.

The agony of inaccessibility

The high altitude villages in the Everest region are far more difficult to access, and it takes more than days to reach the small community of Khunde and Khumjung. It looks like heaven to me, a kind of untouched postcard paradise. The mountain sand so fine it feels like flour, azure blue skies and old handmade Ghompas. We were greeted with smiles and cheers by a beautiful group of men, women and children, so grateful for the relief work that was being done. However, they were hungry, incredibly poor, and virtually cut off from the essentials they need. These people, like most, were living in tents, except that this camp was in a giant basin-like valley. Logistically, moving that many people, with the imminent monsoon and hurricane season lingering like a time bomb, was a terrifying reality that they all were facing. There was an area where tents balanced precariously on the edge of a ditch that drops 10 feet into what was a riverbed. When rains fell a week ago, that ditch became a raging river and two children very nearly lost their lives.

The treatment here was archaic, the conditions inhumane. The people I saw were obviously and seriously unwell. Some were screaming, some blissfully quiet, very few were clothed and during my visit, most stood in the open, naked and covered in rugs. Two earthquakes killed an estimated 8500 people and injured another 20000 in Nepal. While air evacuations from the mountains by helicopters were organized on an impressive scale for the seriously injured, others with conditions deemed ‘not immediately life-threatening’ remained trapped in their villages, unable to access help.

When you do something out of love, you don’t want to stop. Not yet.

My feelings are mixed and complex as always. This feels like the mission that I always knew I was going to do. Ever since leaving Base Camp I couldn’t enter a building without noting its exits and potential shelter points. The local markets down narrow ramshackle brick lanes in Namche Bazaar were reduced to a narrow strip of rubble. I loved those markets—the noise, the spices, the smells, and the women in bright saris squatting amidst their produce grinning their gap toothed, paan stained smiles at me whilst trying to marry me off to their daughters. The amazing thing was that the country had a spirit that very quickly gets under your skin. The people were friendly and welcoming, and everywhere I looked, I witnessed examples of human courage beyond imagination. They were sticking together through what has been the most devastating earthquake in a hundred years.

For me, Everest is no longer just the highest mountain in the world; it is the resilient doctors and locals who worked side by side, enduring every single obstacle that came their way. I still don’t know whether tonight’s sleep will be restful, or whether I’ll be in a helicopter above the mountains of Nepal. But I do know volunteering for such missions has its moments and it’s those moments that make life worth living.

Some of these photos are those I did manage to squeeze out of my frozen camera before disaster struck. I hope they will transport you to the high Himalaya and perhaps inspire and intrigue to volunteer for such expeditions.

When my attempt to stand atop the world’s highest mountain ended, I knew it was time for me to do something different. There are lots of other mountains and other challenges. That’s a good thing for me. When you do something because you love to do it, you don’t want to stop. Not yet. That’s the way I feel.