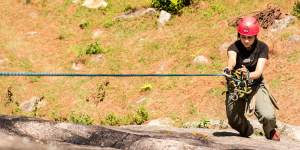 Inside India’s school of rock and ice

While enrolled in a basic course for women at Nehru Institute of Mountaineering, an adventure enthusiast tries to figure out what got a motley group of students on the vertical path.

“Welcome to the camp; I guess we all know why we’re here”. The Who, playing out loud on my phone, is what I used to wake my tent mates up to every morning. Surprisingly, not too many actually know why they are there until I force them to think about it.

While twenty-five odd days is barely sufficient for soul-searching, this time period, if spent on a hardy mountaineering course, can certainly be a good measure of one’s abilities. My tryst with the Nehru Institute of Mountaineering (NIM) introduces me to many minds, and unearthing their motives for participating in the basic mountaineering course has been a challenge as satisfying as any other during the stint.

The batch of seventy is divided into nine ropes at random. My rope leader is a National Cadet Corps (NCC) cadet from Tamil Nadu in south India, who is supposed to command us but her instructions are lost in translation. Like most NCC students, Thivya is here because she has been chosen for the NCC quota that NIM keeps asides for two members per state.

Similarly, 18 & 19 year-olds Tulki and Phoolan have come all the way from Manipur in north-east India to represent their state. It’s their first time outside from their home region, and while they dream of climbing Everest (8848m) one day, cultural interaction is a prime reason for them being here.

There are NCC members from southern states like Karnataka and Andhra Pradesh, and our course leader is an officer with the Indian Navy. However, I’m surprised by how greater enthusiasm comes from the ‘civvies’ or the regular girls at the course, who are there for themselves and not because they are required to attend it.

The one exception would be 29-year old Flight Lieutenant Nivedita, a tall young woman with a determined expression. She usually keeps to herself and mostly has her ear phones plugged-in (even during lectures at times), but she’s not unfriendly when you strike a conversation with her. Nivedita has several laurels to her credit. She went on to scale Kamet (7756m) in the first successful Air Force expedition of the peak. In 2011, she became the first female officer to scale Everest. I’m completely at sea as to why someone with her profile would join a mountaineering ‘course’. It is then that I get an answer that voices the passion that flows not just through her, but perhaps through every aspiring mountaineer present in the two batches. The certificate is mandatory for many sponsored expeditions, she says, but this is a sport that she loves. She adds philosophically, that in any climb there will come a time when your body gives up, but it is your mind that has to keep your body going. And that one moment of summit rush is worth it all, even if it happens to be in a mountaineering course.

My rope is a gregarious bunch, and most of them skim the surface when I ask them their motivation to be at the course. Divya Pant is a young 20-year old graduate from Delhi, who is on a sabbatical and here to ‘escape the monotony’ of student life.

But I dig deeper, and realize that beneath the façade of a break lie best-laid plans for a serious expedition someday with like-minded, young mountaineers. Anupriya Mishra is here on a career break, and so is Ramneek.

Shireen Vana has the ability to inspire many by her story of grit to pursue her love for the outdoors. Despite a serious injury restricting her to the bed for many years and literally learning to walk all over again, she’s here among us, like any other student, only performing better than most.

Some of the students, specially the local girls such as rope member Shailendri who’s here on a scholarship, are here to make a career out of mountaineering. Being a pahadi (belonging to a Himalayan state in north India), Shailendri is born with climbing genes, which is evident as we gaze at her scamper up a steep boulder in no time.

It is heartening to see these girls aspiring to break free from more domestic roles they are expected to play back home. There might be road blocks for them, but there’s no doubting their mountaineering skills and determination.

A lot of this inspiration is fuelled further by Rekha Agnihotri, the only female instructor at the course. She too happens to be a local, who is driven by her love for the mountains. She has scaled peaks like Satopanth (7075m) and Srikanth (6133m), and dreams of summitting Nanda Devi East (7434m) next. Despite being an authoritative figure at NIM, she still has to lie at home about her whereabouts!

Manisha is forty and a mother of two, and a mountain enthusiast beyond compare. Part of the advanced batch, she is an extremely fit and purposeful candidate, and a promising example for women in India who usually give up their dreams beyond a certain stage.

Bhagirathi, also part of the advanced batch, got caught in the corporate world for many years, until it dawned upon her that all of that was pointless if she did not follow her heart in some ways at least. Having grown up in Sikkim, she grew up gazing at the magical peak of Kanchenjunga (8586m). She has returned to her roots in Uttarakhand for the course so she can scale the hardy mountain that has haunted her for a better part of her life.

The youngest girl in BMC is sixteen-year old Shefali Dandy who towers above most at five feet ten something, but is at best a harmless bear cub.

The eldest, Samrjny Komar aka Bobo, is a 36-year old civil administrative officer from West Bengal, who is here because of her love for flora and avifauna. Her rope is perpetually exasperated because her body language and independent routine make it clear that she’s not one for teamwork, and even the instructors’ calls are lost to her in her solo tango with nature. Her innocent endeavours, however, are a constant source of entertainment, just like Beena’s in the advanced batch (an excellent mountaineer regardless), and Sushmita’s, aka ‘Bullu’, in my rope.

Sushmita Solanki is a 20-year old, bright-eyed girl from Patna. Our tent is a lively haven every evening by virtue of her antics. I am amazed for she is one person who was absolutely clueless as to what she had signed up for; she truly had no idea that this going to be more than ‘summer camp’, and that we wouldn’t be spending evenings around a bonfire strumming a guitar. Despite driving our instructor up the wall, she shows a flair for mountaineering, and is one of the more enduring contenders. Without her realizing it, she has infused cheer and positivity in our rope at many levels, qualities that are so essential to a sport like mountaineering. Everyone has inspired someone at some level during the course of this training, and more than the techniques I’ve learnt, it is their stories that linger.

Shikha Tripathi is a travel writer and an adventure enthusiast based in Uttarakhand in north India. You can reach her at shikhatripathi.travel@gmail.com

Read Shikha’s personal account of her experience at NIM in Autumn Issue 6 of the magazine, out in select bookstores and adventure outlets now.