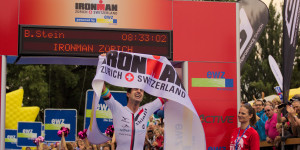 An outdoors enthusiast witnessed the recently concluded Ironman Zurich 2014 and wrote a vivid account of the race, and his admiration for the 'indestructible' spirit of the Ironman triathlete.

I am not a 4 AM person. The only people outside at that time are either inebriated strangers or people who build your city. Today, there were more than five thousand enthusiastic people walking haphazardly in all directions. If you are an early riser, there is much to learn from these athletes.

Today, Zurich hosted an Ironman. Thanks to an ordered city, beautifully arranged around a crystal clear lake, one can swim, bike and run (in that order) at the same time. I was determined to catch the start and headed straight to Safa Island, a small piece of land connected by a narrow bridge, where more than 2400 fluorescent green caps were waiting in the cold and captivating waters of Zurich ready to destroy their bodies over the next sixteen hours. I was confused about what was to be gained.

The whistle blew, crowds cheered and the water level of Zürisee rose by a small margin. This 3.8km swim features a unique Australian exit over the Safa Island. I have swum many times in the Zürisee but never at 5:45 in the morning and never with world-class athletes from around the world. The energy here was incredible, owing to the love and devotion from families of these unstoppable machines. There are only a few people in the world who run, bike or swim with all the energy they have got. Doing all three together in one day was evident enough of what a human body could achieve.

Racing through one of the biggest financial capitals of the world, Zurich has a remarkable view of snow-capped mountains and lush green fields. Just twenty kilometers out of the city, athletes find themselves in rolling green farmlands and loud cheers of spectators lined up on either side of the track. For many of them it was their first Ironman Zurich 2014 race and quite a tough one that. Two laps that include two climbs, “The Beast” and “Heartbreak Hill”, can get to one’s nerves after a cold-water swim in not so sunny conditions.

Racers found themselves in the company of many nationalities bustling with so much vigor and cadence that it was hard to differentiate between their ages. I spent some time lingering around the transition zone talking to a few organizers. Manuel was busy making this event a solid hit but had a minute to say, “This is my fourth race and the energy of this crowd makes up for my lack of sleep. At the end of the day, when I see them crying and laughing while limping away from the finish line, my job is justified.”

On the sidelines, a stranger was walking into the water alone. He asked me to oversee his belongings. When he came out, I asked him why he was not taking part in the race. He replied by saying that he wanted to come check out the city and the circuit. He bought a Speedo wetsuit and wanted to try it out in the cold waters of Zürisee. He said I would find him on the starting line next year.

The dedication of Ironman athletes is beyond recognition. Naturally, we practice one sport, train for it and attune our bodies to every bit of reaction the sport demands. The Ironman Zurich 2014, seemed to me, took a lot of shifting in mental attitudes towards sports that are all endurance oriented in nature but have very different regimens for training. I was in awe of the entire show and started feeling an itch to experience the inexplicable joy that I saw on their faces.

All the racers were in a zone of their own and many did not even acknowledge cheers and hi-fives from their own families from the sidelines. There were many women amongst many men in the race; not only upholding a good fight but also surpassing many of the bare chested, six-pack infested muscle men.

Daniela Ryf, the champion of the women’s section, came out of the transition zone after the biking part ended. I remember how the noise in the environment grew to a different scale at her appearance. She was running like there is no tomorrow and not an ounce of worry on her face. I followed her graceful steps for about a kilometer from the side just to figure out if my own running stride was getting better with time or not. Above all, I was having fun.

The transition zone was bang in the middle of the race and had commentators, both in Swiss German for this vast and animated audience and in English for the International community that was visiting. Hotels and hostels in Zurich were completely booked.

The final part of the race is a marathon; four laps around the lake in a U-shaped circuit that passes through the city and some of its parks. I noticed the ingenious ways in which the runners had stacked chocolate bars and some kind of juice in their body tight skins. By the third lap, many were just strolling past and stopping for a kiss or two from their partners. Many were still running, with a strong pace and totally zoned out, just looking at their fancy GPS watches every now and then, perhaps hoping for this grueling event to end.

At this point I rushed to a small bridge from where one can spot bikers and runners, at different paces, going alongside each other. In my opinion, these bikers are the heroes of the day, struggling for more than fourteen hours as they see runners heading towards the finish line and the constant commentary of how some German beat his own record. They still had a marathon to begin.

At this stage I spotted Nikhil Kapur, running his second lap. Nikhil, from Pune, Maharashtra (as intimated by TOJ), is a businessman and was running his first Ironman. Unfortunately, I could not get down from the crowded bridge in time to get to him and cheer him through that part. But at this point it felt really incredible to find an Indian going through this international event and doing really great at it.

Next stop was the VIP photographer’s lounge. I had to pull some strings but I got a media pass to enter this zone. I had previously only seen the inside of such a place on television. Luckily, I had a camera to justify my presence there.

The atmosphere was getting tense and the crowd, louder. The commentators had already made it clear who was going to win, unless some unknown forces play their part at the last minute. Of course, the German television crew was there to welcome their star athlete and winner of Ironman Zurich 2014, Boris Stein.

Stein came to a halt just before the finish line, shed tears and pulled the finish tape seconds before collapsing on the ground. He must have been physically destroyed and mentally elevated at the same time. He got up again, gracefully accepting his medal, to hop along the final row of his fans and thanked everyone with teary eyes and an unbelievable expression of accomplishment. Moments later, Stein fell on the grass outside of the winning arena and was wrapped in a silver blanket by his partner.

The electricity that ran through this crowd uplifted my spirits and I saluted to the two thousand odd athletes that were still running and biking for their indestructible spirits. Though I swim well, my fear of open waters keeps me from thinking about being on the other side of an Ironman someday.