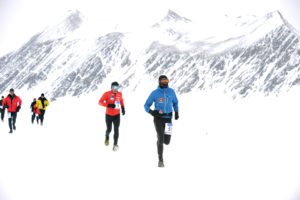 It’s a Lonely Road to Adventure

Once there was a broken man who regained his spirit in the most unusual way.

He started running away from life, literally, finishing 52 marathons in 52 weeks around the world, 42 countries, all 7 continents.

I have done my very best in the last few years to run away from “real life”. My marathon journey started with a measly 8km run back in 2005. I was a post divorce time bomb, ticking toward my own destruction. I’d lost my way, my reason for work, for love and the pleasantries of society. If my buddy Rob hadn’t taken me for that first run (or many subsequent runs), I would have continued to rage at the world and I hesitate to think where I would have ended up. Rob gave me a release valve for all of that anger. Rob had run 7 marathons by this time, dealing with the stresses in his life through physical meditation. He coached me to my first Melbourne Marathon that year in 2005 and it was my first real taste of adventure in years. I was way outside my comfort zone. I was scared as hell that I wouldn’t make it. I was frightened of potential failure and what that might do to my battered confidence.  But old Rob looked me in the eye and said “You can do this mate. You’ve done the training and you deserve to be here. Now let’s get out there and get it done.”

That fear lifted at about the 38 km mark and I got the marathon done.

I was exhausted and elated, but most importantly, I was enlightened. I had a new process for breaking out of my bubble and finding a little adventure. My marathon journey – from planning, through training to execution – was a blueprint to success. If I came up with a goal, no matter how enormous or daunting the task, I could always break it down into a marathon plan, with short term and long term goals. I could come up with a training regime, find the start line, ear-mark the flaws and anticipate the failures.

I discovered that failure wasn’t such a bad thing either. In fact, it was a fast track to learning.  The more I failed, the faster I learned and the more comfortable I became with just “giving it a go”. Whatever the outcome, it was an incredible adventure. The problem was, the further afield my adventures took me, the less my friends were inclined to join in. It also became harder to find road maps to get to these goals. More risk. More money. Less infrastructure. Less glory if it wasn’t a big city marathon. Less appealing to my mates.

Jump to 2009 and I lost my job in the Global Economic Crisis. It was a primo job sales job at Google, looking after the Australian auto sector. I thought I was doing great, but life will always throw in another hurdle. The Melbourne office was shut as part of general global cutbacks. Crap. The anger started to come back. The fear.

So I took off. I ran Comrades in South Africa – my first true ultra marathon and my first race overseas. I even found a few friends to share the experience. WOW. Blinding. Astounding. Heart wrenchingly beautiful! 90kms of running bliss with beautiful people from everywhere. What was I afraid of? The distance? The foreignness of Africa? As it turns out, long distance running is a great equalizer in many ways. We all sweat and gasp and wheeze our way over the distance and up the hills. We all gulp at water, whither with fatigue and ride the emotions of the journey. We all grimace, groan and grunt. And we face our fears together, no matter the colour of our skin, or the language we speak. We confront our darkest doubts and hope to find a better person on the other side. You have to do it alone. But you’re not alone. It got done. It was mind blowing.

Off the back of that adventure, I decided to raise the bar again. I came up with a plan to run 52 marathons in 52 weeks around the world, 42 countries, all 7 continents. I figured I could find that connected feeling in all corners of the world. But there was no precedent. There was no road map. Doctors, athletes, friends and family all told me not to go. They said it couldn’t be done. Not by me at least. Not a real runner, they said. Too unknown. Too many variables. Get back in your box.

Of course, I went anyway.

Brimming with enthusiasm and false bravado. I told anyone that asked that I would smash this challenge, yet in my darkest heart, I was absolutely petrified to venture out on this fragile limb. I dealt with the fear in the only way I could. I accepted that everything bad was likely to happen – jetlag, exhaustion, cultural confusion, theft, sickness and inevitable failure through injury. It was a plan that could not possibly succeed, so it was clearly ridiculous to even try. Which was exactly why it could succeed – because I now had nothing to lose. Nothing ventured, nothing gained. And like any adventure, you really don’t have a clue how things will play out, especially on something of such huge scale. Fear has a way of dissipating when failure is a fixture. May as well have fun trying…

In a global crisis, it’s hard to get sponsorship for a crazy dream like that, one that would cost in excess of USD $100,000. I wasn’t going to let a trivial thing like money stop me though, so I had to sell my apartment, my car and everything else I owned, backing myself to make the project work. I weighed the risks and decided I was only really risking my own body and financial future. No one else would get hurt.

From Jan 1, 2010, I found my start line in Switzerland, then legged it through Dubai, Mumbai & Israel. Kicked around Europe, partied in Tokyo, smashed through the States, clocked up kilometers in Cyprus, Egypt, London & Paris. Sidestepped an Icelandic volcano and busted out the Boston Marathon. I climbed the Great Wall, danced across the Danube, ate up Argentinean World Cup fever, gazed at Rwandan Gorillas, ran with Spanish bulls, rocked out in Roskilde and high 5’d the big heads on Easter Island. And I drank too much in Morocco, Medoc, Montreal, Moscow, Madrid, Berlin, Belfast, Santiago & Scotland.

Marathons every week, sometimes Saturday and Sunday. 100km ultras. Mountain races. Big city events. Monthly personal records. Monthly infections and injuries. Mostly alone. Mostly lonely. And it’s the loneliest moments that have had the most impact on my memories. On the bumpy ride to the forest in Western Mongolia. That day I wandered the streets of Havana, looking for a bed. Flying over South America as the sun sank away. Running through the poverty stricken streets of Mumbai. The most confronting of these occasions found me in Omsk, lying on a waiting room bench in a Soviet era Siberian train station of at 2am. Having just arrived, I had no bed, no language skills, no maps, no onward ticket, no frame of reference and no chance of leaving till daylight. I’d been terribly sick for a week, so I was sore and sad. But I had an epiphany. How bad could it really be, alone in a strange place like this? I had chosen to be here. I wanted this escape from the world. I was stressed, but I was also testing my resilience, looking for my outer limits. I was over halfway through the journey of a lifetime, not at my desk in Melbourne, or on my couch watching a portrayal of adventure. I was living it! I think removing yourself from the norm to challenge your own abilities and explore your own boundaries, will always take you to a new and better place. I won’t be rushing off to a risky war or anything soon, but in the last few years I’ve run across the Sahara, over the Austrian alps, around Mont-Blanc, along the border of India and Pakistan in events like Run The Rann. I’m still scared. But I don’t mind getting heading off on that lonely road to confront my fears. It’s always leading me to a more interesting place.

I’ve recently returned to “real life”, after a few years as a professional speaker and motivator. I’m settled in a new advertising job, with a lovely new wife. I don’t feel the need to escape anymore, but I won’t be resting on my laurels. Instead I find my way to at least one race start every month, somewhere in the world, pushing myself back to the edge to see what I’m made of. It’s a beautiful way to live and I’d recommend it to anyone. In fact, strap on your shoes sometime and come find me in this happy place – I’m the guy running an ultra with a cheeky smile splashed across his dial.  See you out there!