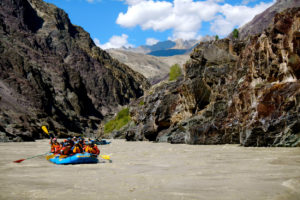 Out of all the great canyons and rivers, a world classic- the last lost horizon, the land of White Copper, the Grand Canyon of Asia—the River Zanskar!

“There’s a high chance of us flipping our raft, you know, since it’s a grade five rapid”, said our jolly, large-bellied river guide, Rana. The group was nervous; our rafts parked 30 yards from the ominously dubbed rapid—The Dislocator—aptly named by a group of river guides who dislocated their shoulders trying to run it. As the always-smiling-optimistic river guides scoped the rapid out with an air of nonchalance, the group of 19 river-noobies waited apprehensively, contemplating their lives. “Don’t worry, guys—we’ll be fine”, said Rana, oh-so-reassuringly.

Let’s rewind to a week before. Our group, which was an amalgamation of Indians, Australians, and Americans, met in Leh—the touristy, festive, militaristic capital of Ladakh, in the state of Jammu and Kashmir in Northern India. Organized by Mandip Singh Soin, an explorer and founder of Ibex Expeditions—who had already rafted the Zanskar twice—our expedition was set to commence. As we listened to ‘Mandy’ speak on the first night, we learnt that he had embarked on the never-been-done-before Chadar trek in 1994 as a reconnaissance expedition that led to winter tourism in the area. The Chadar trek is a journey through the Zanskar valley on the frozen Zanskar river—an extremely challenging ‘hike’. He rafted the river in 1981 with an American company and then again in 1996 with a student group. “Basically, I get an itch to do it once every decade”, he joked.

Knowing we were in the safe hands of a seasoned explorer, we then met our friendly, jovial looking guides, of Aquaterra Adventures, who had run the river over forty times. All of them were professional river runners and world champions at kayaking and rafting. We knew this wasn’t going to be just another rafting trip—it was going to be much more than that.

Where in the world were we?! Ladakh, or “Little Tibet”, lies in the rain shadow of the great Himalaya. Located in the most sparsely populated region in Jammu and Kashmir and situated on the Tibetan plateau, it is full of fantastical sights; snow capped mountains, mysterious gompas (Buddhist monasteries) and colourful people.

Our journey began from Leh, went on to Kargil, Rangdum and finally Remala. Zanskar is situated in the eastern part of the state of Jammu and Kashmir, in the Kargil district with the Zanskar Range separating it from Ladakh. A region in Ladakh, it is one of the highest inhabited places in the world. Cut off from the rest of civilisation for half the year, the only way to access this hidden kingdom in the winter is to trek across the frozen river gorge. In the summer, the Zanskar, which is one of the highest rivers in the world, creates Grade four and five rapids, many of which are still unnamed.

The last lost horizon of the world, the land of white copper, the Grand Canyon of Asia—we were on our way.

The starting point of the rafting trip, at 3,635m (11,926 ft), began on the River Stod—a tributary of the Zanskar. After a night of camping, we got into our wet suits—an amusing experience if you’ve never done it before. Struggling and tripping, trying to find the correct zippers, we were finally strapped in. After loading a light change and a few essentials in our dry bags, we got a lengthy safety briefing from the guides. Teeth chattering, with a family of butterflies in our stomachs, we began to ride. It took us about four-five hours to cover 30km in Grade two rapids—a good introduction for first timers. We didn’t know what all the fuss was about—today was a piece of river cake.

Day two started at Pidmo, a stretch at 25km for three hours on Grade two and three rapids. Today was another easy day to get used to the river, altitude, and our questionable paddling skills. With bizarrely coloured mountains of blue and red and purple, the journey has begun to get psychedelic—it seemed like a dream in the head of Hunter S. Thompson.

On Day three, we rafted three hours and 25 km to Nyerak—here we witnessed the gorge narrowing in on the river. With a feeling of impending doom, we heard the ominous cracks of water lash on the rocks. The day had come—it was time to get our rafting on, it was time to graduate to Grade five.

“Don’t worry, guys—we’ll be fine”, said Rana, oh-so-reassuringly, “just listen to my voice—let’s go!” The Little River-Rana’s (that was the name of our raft—christened cleverly using witty wordplay) were nervous, and rightly so—we were always the “first raft”. There was going to be no trial and error on the infamous Disclocator. We were excited; we were young—but too young to dislocate body parts. The rapids were fifty yards away, we began to paddle, everything seemed stunningly silent. The crashing rapids seemed to have been put on mute—it was the calm before the storm. “Back paddle! BACK PADDLE!” screamed Rana. Before we knew it, the battle had begun. After a sketchy drop, we all paddled fiercely and somehow in unison. For a dizzying 30 seconds, there was water everywhere—our guide was screaming instructions at the top of his voice, we were somehow listening and following orders. All our senses heightened, we didn’t know if we would flip or not.

Our muscles burning, drenched to the core—we realized we had done it—we had conquered the rapid that wasn’t as kind to its christeners. Pumped with adrenaline, stoked and soaked, we were the rulers of the hidden kingdom. Three days ago, we were trying to paddle in Grade one and two rapids—today, we had conquered a solid Grade five, and it felt darn good.

Still high from the conquest of the day before, we continued to Lamaruyu on Day four. The 35 km rafting section lasted for 5-6 hours and was a wild white water day. We journeyed through Grade three and four rapids and landed on a Grade 4 rapid that had been fondly named the Constrictor—due to the gorge narrowing down to a constricting 18 ft. After owning the Disclocator, we knew we had its little brother—baby Constrictor, in the bag. Just like that. 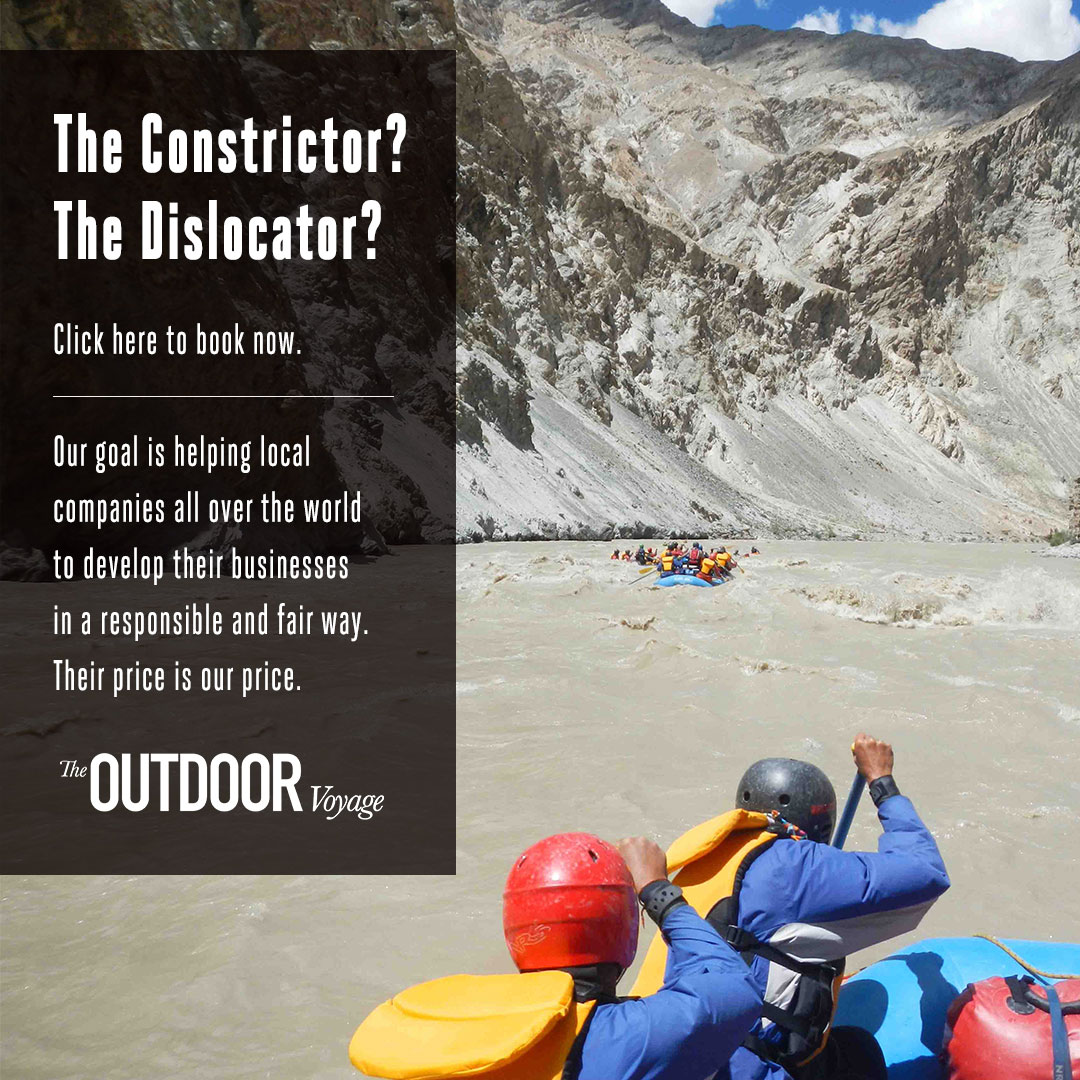 On Day five, we rafted for about 40 kms on Class three and four rapids from Lamaruyu to Nimu. This is when we witnessed the change that had been coming to Zanskar for a while now, in the form of a road. When this road—that has been in construction for years, is finally built, Zanskari people will no longer have to travel for days to reach a hospital. Development is imperative, albeit often times, it comes at a great cost. It didn’t change the mixed melancholy we felt watching the gorge being blasted apart, from our raft.

The rubble raining from the sky and the dust in the air made it impossible for us to see, and even our seasoned guides were noticeably unamused. Though we were floating, not being able to see two feet ahead was almost as daunting as navigating the Dislocator—the most nerve racking minutes of an otherwise surreal journey. Of course, our guides navigated through all of the commotion—their other senses probably heightened due to the loss of one. They were just that good. We soon regained vision and sighs of relief were heard all through the valley.

Emerging from the canyon, our adventure ended at the confluence of the Indus and the Zanskar—a beautiful conclusion. We had survived the Dislocator, the Constrictor, the mountain blast, and had had a psychedelic five-day trip—without the peyote. Throw the Zanskar River into your bucket list, find the Copper Star—it’ll be gorge-ous.