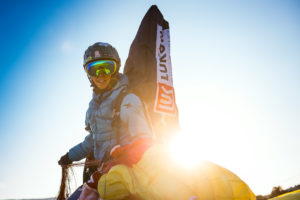 Klaudia Bulgakow, currently the world’s third best female paraglider, tells us the story of her life as a pro pilot and all that comes with it.

I was totally into motorcycling at 17. I wanted to speed on the streets of Warsaw all the time. Around that time, a new neighbour moved into my building. He was a motorcyclist and a paraglider. He told my concerned mother that biking was far too dangerous on Polish streets, and that I should try paragliding instead.

So then I got my first standard tandem flight. I didn’t really enjoy it. I thought, why should I spend so much money on something so boring? But after spending the summer at the airfield, playing with the glider, I decided to give it a try and fly by myself.

In the beginning it was very hard. I come from a sport background, having trained nine years in ice skating and four years in tennis. I knew that if you want to become good you need to work hard. Back in 2000, 2001 there were just 20 guys competing in Poland. We had 3-4 guys going for a World Cup and I was the only competing girl at the time. It was not easy because there wasn’t any program of preparation, no coaches, no mentors. I needed to learn alone. But I was always lucky to find great people who helped me as much as they could.

On being World Champion

I think becoming a world champion is a goal for any competitive athlete pursuing any sport. I have been a Polish Female Champion since 2011. The World Championships in 2013 came down to the last task between France’s Seiko Fukuoka and me. I have no idea what happened, because she was flying very well. I knew I needed to attack to win that day. I was on fire. It worked out.

I started the competition with a low ranking. I did three bad tasks straight in the beginning that put me in the 8th position. So I thought I have nothing else to lose and decided to push my limits as much as I could. Doing this I managed to win 7th task in overall (man and woman). The feeling of entering the goal when there is no one is amazing and addictive at the same time. I became the second woman in history winning a single task in an overall category – after Petra Slivova in 2005. I know what am I capable of and it makes me so hungry for more. After many more adventures I finished the competition with third position.

Athletes like us survive on sponsors. I’m very grateful to Lukoil for being with me for the past six years now. They stayed with me during the bad times, and that’s pretty nice of them. For sure there is some pressure to keep the brands visible. I do my best to run several projects every year. Without them and my previous sponsors and partners I could never have achieved what I did.

I was touting for the top title during the World Championship in 2009 in Mexico. Unfortunately, it wasn’t really my competition. On top of this, Swiss team member Stefan Schmoker, who was world #3 at the time, was killed in an accident during one of the tasks. My world fell apart. I started questioning my own ability. I was scared of flying for a whole year. So depressed. I considered quitting very seriously.

But in 2010, when I decided to give it one last shot, I realized that my love for flying is stronger that any fear. I made a recovery plan for myself. Redesigned all my goals and ambitions. Changed focus. That experience has made me stronger than I ever was. It made me a better competitor, a better person and helped me win the World Championship in 2013.

Paragliding is more of a mental game than a physical one. But from my experience, if you stay physically fit your brain works sharper, you can stay focused for a longer time. So I work out a lot. I run, do some fitness, physiotherapy for mobilisation and posture correction to maintain better energy flow. I go skiing and snowboarding in the winters. I hike to fly and to ski. I do my best to stay fit in my brain, so I never stop researching on mental tricks to compete and fly better.

Paragliding is a sport where we chase the best weather to fly and compete. We travel the world for this. This sport gave me a chance to realise one of my biggest childhood dreams – to learn about the world. So I never just fly in a competition and go back home. I stay longer, see things, meet local people and their culture. I feel so gleeful about this lifestyle and for all the friends I made and the people I met on the way.

I plan to keep competing for as long as I can. My focus for now is on the World Championships in Feltre, Italy this July. I want to share my experiences with the world to help them fly safer and better. I plan to start a career in public speaking too. A film about my life will release later in May.

This story was part of the Opening Features section of The Outdoor Journal Spring 2016 edition of the print magazine.