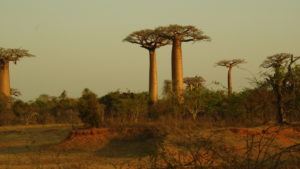 Madagascar and Me – Lessons Learned on ‘Big Red Island’

What started as an attempt to become the first British person to solo circumnavigate this modern day Jurassic Park, turned into a terrifying education into human caused destruction—deforestation so severe it can be seen from space.

Madagascar: the fourth largest island in the world, and to me, a modern day Jurassic Park. There are animals and plants that live on the ‘Big Red Island’—as it’s known locally, that can’t be found anywhere else on the planet. A must see for any explorer or adventurer, and for me, a place I had to visit. It turns out, I had a much bigger adventure than I ever could have planned.

My 40L rucksack was home to my tent, my camera, a load of water and some basic clothes.

Thankfully, I also packed my sense of adventure—and this was pushed to its limits, hitchhiking and walking in extreme temperatures is made even harder when you can’t speak the language. I set off to walk/hitchhike around the entire island, a distance of over 4,800km’s, camping and sleeping under the stars where I could. Before I could even start my journey, I had to travel for 2 days by bus and wait another 2 for a 12 hour train ride to get me to the coast. From there, I passed along the wet and greener east coast, often drenched by the monsoons that rise up and over the central mountains of the Hants Plateaux. I struggled to find roads and pathways in the semi-desert South, I roasted in the scorching sun of the dry and lengthy West coast and finally enjoyed some local beers while making my way toward the more touristic areas in the North.

Of course this was more than just a long walk; it was an education. Throughout my adventure, my eyes were opened to the island’s darker side: acts of human destruction on such a scale that soon, nothing of this great land will remain.

Deforestation has ravaged the Great Red Island to unrepairable levels; since 1990 over 40% of the natural forests that exist on Madagascar have been destroyed. The damage is so severe that it can be witnessed from outer space; astronauts comment that when the rains fall, it looks like Madagascar is bleeding as the falling water washes millions of tonnes of exposed, iron rich, red soil into the vast arterial network of rivers and lakes that adorn the island, the red water flowing for thousands of kilometres and literally washing the island away. I ended up travelling by boat through an area of forest that was besieged by the particularly devastating technique of slash and burn deforestation.

It wasn’t the smoke or the flames that I noticed first, it was the noise; a dull roar interspersed with what sounded like sudden cracking whips.

As I moved onwards, the smoke became thicker, and soon I was engulfed in a blanket of dry air and the unmistakable heat of fire. Through the black fog I saw the flames, huge roaring flames that lined the entire left bank of the river, flames that danced around every tree and bush and plant, what lived there once was being forced to either flee or burn in the wild blaze. The boat was more than 30 meters from the bank, but the heat could be felt even when stood behind one of the sections of cloth that we had hung from the wheelhouse to offer us protection from the sun. We sailed for over 20 minutes before the flames began to settle to a flicker and reveal the charred black earth beneath, the slash and burn technique of deforestation having dealt its trademark blow to yet another couple of hectares of unique forest. My camera stayed tucked in my bag, this was something I didn’t wish to show people back home.

As for the wildlife that remains alive, thankfully, it was just as incredible as I had hoped for.

Lemurs jumped from every tree, with different types found on all corners of the island. Spiders as big as dinner plates, insects as colourful as coral and chameleons the size of your thumbnail stay hidden in the leaf litter while their giant cousins, the panther chameleons, sit proudly in the trees, each bulbous eye moving around in search of the next meal.

As for my food, that was just as interesting. I found supplies in the tiny villages, swapping my t-shirts for bags of rice and loaned out my iPod for sips of fresh water from the bemused children who marvelled at the sight of my red beard and complicated camera equipment.

I was proud of my achievements, exhausted but proud.

I had journeyed for over 5 weeks and covered nearly 4000km, when mother nature got the better of me. There’s nothing like a tropical illness to stop you from walking! It turned out that I had contracted malaria, unsurprising given my daily sleeping arrangements outdoors, and after a particularly harrowing 24 hours spent in an isolated and dirty hospital, I had to fly to Mauritius for better treatment. But that’s another story.

As for my lessons learned in this one? Go see Madagascar, it’s stunning wildlife, its wonderful people. Because soon, it’ll be too late.