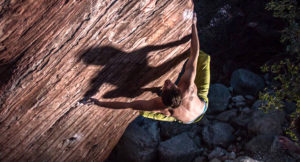 Chris Sharma established the first world's first 5.15a and first 5.15b, and made the second ascent of the first consensus 5.15c, La Dura Dura

Over the past decade, he has been mentor and role model to many talented, young climbers. Now, he has taken a virtually unknown young Spaniard—Pol Roca López—under his wing.

So tell me a bit about yourself, Pol!
My full name is Pol Roca López and I’m 21 years old. I live in Sant Quirze de Besora, a small town one hour from Barcelona. I’m a pretty laid-back person, but I can never stay still. I always need to be doing some kind of sport. I mainly climb but I also do other sports like downhill skiing and kayaking.

When did you start climbing?
I began climbing 10 years ago. I always played sports with my father, and I started climbing thanks to him as well. He took me to a climbing area in a village near where I live. Within a year I was already doing competitions—everything started there.

How did you first meet Chris Sharma and how did that relationship develop?
My first contact with Chris was in Cova del Ocell [a small cave]. I was there to try Catalán Witness the Fitness with him [a V15/8C eventually established by Sharma], to figure out the moves and make progress. Then, thanks to Sharma Climbing [Sharma’s climbing gym and company], our relationship strengthened and now I am part of the Team. We continue to climb together and try out everything that inspires us.

Who else is on Team Sharma with you?
At the moment there is no one else on the team.

Is Chris a mentor to you?
Chris Sharma has been very inspiring for me ever since I started climbing. He is a person who inspires a lot of motivation in other people. I always watched his videos, I had his posters in my room, and my hands always began to sweat watching his climbs. He is a very strong climber, and he sends good, positive energy to all of us.

What are your proudest bouldering achievements to date?
I have a lot of ascents I’m proud of. For example Doblebada (V14/8B+) [which Pol made the first ascent of] in La Comarca, 21 Grammes (V13/8B) in Targassone, Riverbed (V13/8B) in Magic Wood, and especially Double Bubble (V14/8B+), which I recently made the first ascent of. I especially like cleaning blocks and opening new routes. It’s something that really motivates me.

Can you talk a little more about Double Bubble?
“Double Bubble” is a boulder that I started to clean with some friends in the La Comarca area, located about 20 minutes from my house. Nothing more than to try it out. I told Chris we should do it together, but after trying it for about two days we couldn’t solve the last moves and we were about to give up. But after a few more days I figured out a method that worked. It is the boulder problem that has taken me the most attempts, about 10 days, so I was very satisfied to be able to send it.

Have you still been trying Catalán Witness the Fitness? Are you close?
Yes, I started trying it with Chris. It’s a style that’s not very good for me, but this is what motivates me to try. I’m pretty close to sending it, but I have one final part to figure out, so now I’m focused on other projects. I would like, in the near future, to devote myself to it again.

We arrived in California—Chris, Ricardo Giancola (the photographer) and I—and first we went to his home in Santa Cruz where he showed me Panther Beach and Castle Rock, two areas where he started climbing. Then we went to Bishop to climb with some friends. From there we headed to Red Rocks in Las Vegas, and then to Los Angeles to the opening of Sender One [a new rock climbing gym], where we stayed for a week to visit several friends and brands. We ended the trip for a few days staying with Jason Momoa, climbing in an area near Malibu, and then back to Santa Cruz to catch the flight back home.

Any notable sends from the trip?
There weren’t many big sends since the weather wasn’t really working with us. In Bishop it hit 28 degrees C, and in Red Rocks 30. It was a bit of a crazy winter! In the end we were able to finish a few blocks between V9 and V12 but it wasn’t a trip for sends. Rather it was a trip in which Chris taught me about his start in climbing and different areas near his house, and gave me the opportunity to get to know the bouldering in the U.S. for the first time. Thanks to this trip I also got to meet many of his friends and family.

What are your goals for the next couple of years?
I would like to travel and get to know climbing areas in South Africa, Australia, and go back to U.S. Above all, I’d like to look for new challenges and be able to keep climbing a lot and making videos so that all of you can enjoy them like I do! I also plan to try repeating some of the problems, routes and deep water solos that Chris has established over the years.