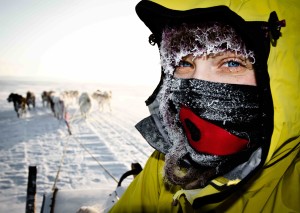 Sarah McNair-Landry is the first woman to be recognised by the International Polar Guides Association as a Master Polar Guide.

She is also the youngest person to have traveled to both the North and South Poles.

Eirliani Abdul Rahman, together with her climbing partner, Ruta Sidlauskaite who hails from Lithuania, are gearing up for an expedition to the South Pole in January 2017. Over 60 days, they will be pulling sleds weighing 50kg each over 1,100 kilometres. They are both training at India’s first indoor climbing gym “Delhi Rock”.

Here, Eirliani interviews Sarah McNair-Landry, who along with her brother, were nominated in 2007 for the National Geographic’s “Adventurer of the Year” Award, and named one of the “Top Ten Women in Adventure” by the National Geographic Adventure Magazine. Sarah is the youngest person to have travelled to both the North and South Poles. She will be Eirliani’s and Ruta’s guide for the upcoming South Pole expedition.

Describe why you grew up with a love for the outdoors. Did your parents play a major influence in your childhood?

My parents moved to Baffin Island, northern Canada to start an outdoor adventure company called NorthWinds and to raise my brother Eric and I. We grew up in the Arctic with a team of dogs and the Arctic Ocean in our backyard.

Our parents taught us how to be comfortable and have fun travelling under the cold and harsh Arctic conditions, and brought us on many camping adventures during our childhood. As my brother and I got older, we started to head out on longer and longer camping trips and eventually, expeditions.

You were the first woman to be recognised by the International Polar Guides Association as a Master Polar Guide. What had you done to achieve this accolade?

The International Polar Guides Association recognises guides on their past guiding and expedition credentials, experience, and skills. In 2015, I was honoured to be the first woman recognised as a Master Polar Guide.

The reason I have done so many expeditions around the world is simple: because I love it and am passionate about it! That’s what drives me to come up with new routes and expeditions, to spend all my time and energy planning and heading out on trips.

What advice would you give other women adventurers?

Get outside and have fun!

Your adventures are not limited to the polar regions. You have also kite buggied across the Gobi Desert, canoed rivers in Russia and rode camels through the Sahara. What attributes should one have in order to be successful in expeditions?

I work hard, train hard and am extremely goal driven. But most of all, I am passionate about heading out on adventures and expeditions. If you are passionate about what you do – it makes motivating yourself and working hard much easier.

I also love to challenge myself, and heading into the desert for me was a huge challenge and an environment that I do not have lots of experience in.

How do you train and prepare for your expeditions?

I believe the success of an expedition lies greatly in the planning and training. Testing and modifying gear, packing as light as possible, designing a menu that provides high calories, physically and mentally training and route planning are all extremely important.

I am constantly learning new skills and finding new and better gear, and I see every expedition I complete as a form of training for my next one.