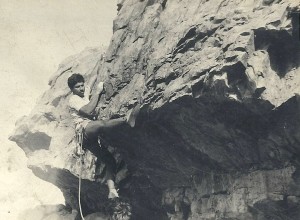 How does one even begin to write about a giant? Mohit Oberoi’s “Mo” pioneering efforts, along with a tiny clutch of other climbers, to document the climbing routes in Delhi and Dhauj in Haryana, is legendary, the culmination of which is the Guide to Rock Climbing in and around Delhi published in 2001, the first such book for Delhi and its environs.

As a 13-year-old, Mo started climbing under the tutelage of Rohan “Kan” Datta, Tejvir and JC Khurana, Mandip Singh Soin and other members of the then newly formed Peg & Piton Club. Not to forget Robert Chambers, the renowned development practitioner. The latter, who was then working for the Ford Foundation in India, had fallen for rock climbing during a previous posting to Kenya. The Peg & Piton members, and Chambers were hard core about their love for climbing: they were at Dhauj in Haryana every weekend, rain or shine. While Dhauj was already being climbed back in the 1970s, under the redoubtable MS Bawa of the Climbers and Explorers Club, climbing at Dhauj really took off under Chambers.
“He had a van, you know?” Mo explained. “Who had a vehicle in those days? So we would all troop along. He was there, even if it was 46 degrees Celsius.”
All his climbing mates, but especially Chambers, made an impact on the young Mo.
“One day, Chambers and the Peg & Piton members decided to take on the big wigs in the Haryana government. They witnessed the mining that was going on which was destroying the hills at Dhauj. All that blasting. So they talked to the Chief Secretary in Haryana who sent a telegram to the Faridabad District Collector, instructing that all mining activities should immediately be stopped. So it became a protected area.” Mo smiled at the memory. (Despite the court order, there are still instances of illegal quarrying in the area)

Many first ascents were made, Dhauj being virgin territory.

Once Robert left India in 1985, Tejvir Khurana affectionately known as “Teji”, and Mo became the “go to” people to get to Dhauj. Khurana owned a “Crusader” motorcycle which played a big part in getting to Dhauj quickly. Else, it took changing three buses and three kilometers walking one way to get to Dhauj. Mo also fondly recalled that Sanjay Basu’s “Yezdi” was a great help in getting to the climbing site.“We were there every weekend. Word quickly got around. The first ascents were getting done. But we had a strong ethic to only lead the routes, no top roping,” Mo reminisced. Mo also made trips to Bangalore, Badami, Chhatru, Mount Abu in Rajasthan, Nainital and Pachmarhi in Madhya Pradesh to train. But for Mo, Dhauj was also good training ground.

“In those days, people would be surprised by us, climbing the way we did. It was because we climbed at Dhauj.” Mo hastened to add, “But there were of course ‘stories untold’. There were days when we literally could not complete a route at Dhauj. Not a single one. It was just difficult.”

Mo’s contemporaries were the late Rohan “Kan” Datta, Sanjay Basu, Tejvir and Jasvir Khurana. The ‘next generation’ of climbers, as Mo called them, emerged in 1986 and were at the fore for a full decade: Annie Jacob, Deepak Jhalani, Depinder Singh, Paramjit Singh, Punit Mehta, Raghav Sundar and Shubhendu Kaushik. Mo eye’s lit up as he recalled the gear that he and his mates used: “We wore jungle or what you also call hunter boots, you know? But then we moved on to canvas shoes, at least you could feel the rock then!” Rock climbing shoes came in much later, being imports or gifts from relatives and friends visiting Europe.

And what about harnesses, I asked.

“We just used to tie the rope around our waists!” Mo beamed at me. The group later acquired seat harnesses. “We’d have maybe one friend – size two or two and a half, and a couple of nuts and wires. That was it. Hip belays were the norm!”

‘Hotel Palace’, a 5.10R and three-starred route at the Pantheon Rocks, also holds a certain fascination for Mo. An ‘R’ rating means that for lead climbing, protection is difficult to place, or the crux is difficult to protect. As such, a fall could lead to injuries. At 80 feet (24 meters), Mo described it as a classic test piece and “very intimidating”.

“We were up there one day, Raghav Sundar and I. I was leading and used up the precious and only “friend” I had during the first 15 feet (4.6 meters) of the climb. But once I was close to 40 feet (12 meters), I realised that I needed that “friend”. So my belayer Sundar climbed up to the “friend” at 15 feet, deftly removed it, climbed back down to the ground and threw it up at me. I caught it on the first try! What a good throw!” Mo laughed. “Those were the days!”

And what was the hardest route at Dhauj?

“The ‘Hysteria with a Sten Gun’ in the Prow area was the hardest,” Mo replied without hesitation. This is a 5.10a and triple-starred route, standing at 50 feet (15 meters) high.

Mo remembers the climb, clear as day.” It was 1986 and we had our usual trad gear. It was to be my second ascent. We were wearing our PT (physical training) shoes and spent a good half day there. I remember being on a ledge above the crux overhang, and I spent a long time trying to figure out the problem. I could not see my belayer below anymore. But suddenly, I found myself at the top.  It took a lot of energy, you know, the energy from being young! There was no social media, nothing to shout out to the world. We were doing this purely for the love of climbing!”

Mo was coy about his probably most important outing at Dhauj. It was in Dhauj that he met his wife, Annie, in 1989.

Do you remember which route it was, I pressed.

“No!” Mo laughed. “She was climbing there as a member of the Climbers and Explorers Club.”

He was 21 years old then; they were married five years later.