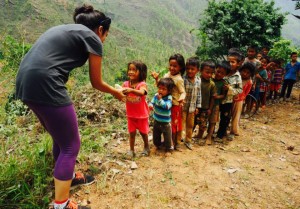 Apart from the government and big agencies doing their bit, it is the small enterprising outfits helping Nepal back up on its feet after the earthquake.

Houses along the Tikucha River in the North-East corner of Kathmandu valley are traditional in construction, where clay mortar is used to bridge the gap between thick inner and outer wall structures made of baked bricks. They are supposed to be earthquake resistant. Now, all that remains along the river is a pile of rubble. Durbar Square is one of the three royal palace squares in the valley and a popular tourist attraction. It is now home to dilapidated temples, all of which are UNESCO world heritage sites.

Recently, a major earthquake (7.8 M) – the first one in a series of two – claimed over 8000 lives and injured more than 19,000 across various districts of Nepal. Tens of thousands of people are still in need of shelter, food and clean water.

While the government’s rescue missions are focussed on Kathmandu and was earlier directed toward Everest, they are reportedly inactive in many regions. “Mountain villages are cut off from almost everything, landslides block the roads and no significant aid is on the way,” CNN reported from the ground. Survivors have no access to potable water and landslides and rock falls have disrupted the chances of any potential aid.

Mountaineering expedition teams from around the world, who contribute to a major part of Nepal’s economy, have returned home. On a normal day, mountaineers would meet at the Rum Doodle café in Thamel district of Kathmandu. That too is partly wrecked in the devastating series of earthquakes. A few groups have stayed back to help aid services on the ground.

Merely fifteen minutes from, an unassuming bed and breakfast called the Yellow House is running a guerrilla style relief and rescue operation, emerging as one of the many ad-hoc relief services. After a day of organically establishing itself under the leadership of Nayantara Gurung Kakshapati, the group sent a truck filled with bread and first-aid kits to six towns in the Lalitpur district of Kathmandu. When one of her volunteers – a British nurse – came across injured people in an inaccessible village close to Sindhupalchowk, Gurung Kakshapati arranged for a private medevac for them. Abe Streep has documented their efforts in a comprehensive article for Wired Magazine, directly from Nepal.

Even May is a cold month here and erratic rains in the pre-monsoon season have hastened the need for tarps throughout the wrecked rural parts of the country. While international aid is sitting at the airport in Kathmandu, Sherpa Adventure Gear, a gear outfit based in Nepal is manufacturing and delivering relevant aid to the rural parts. “The company turned Sherpa’s headquarters in Kathmandu into a mini relief centre and they quickly turned to manufacturing and distributing 700 blankets, 300 simple tents, and 500 tarps,” Tsedo Sherpa, vice president of the company, intimated to The Outdoor Journal. “Additionally they sourced another 1000 tarps from India via family connections.”

The middle hills region – as the locals refer to it – is wedged between flatlands in the south and high mountains in the north. Villages in this area are surrounded by steep and inaccessible hills. A local non-profit called ‘Kathmandu Living Labs’ run by Nama Budhathoki launched the site quakemaps.org for reporting real time earthquake response information. This has helped various relief groups in creation of maps for understanding the rugged terrain of a country where navigation is otherwise an onerous task.

Another, more amateur, organization found itself using the quakemaps site. Food for Relief, started as an effort with a group of friends trying to help the grieving villagers of Nepal. Two days after the first quake, Mridula Saria reached out to the Federation of Nepalese Chambers of Commerce (FNCCI). “My immediate instinct was to go to the relief camp and see how I could help. But looking at the politics going on within the organization, I was demotivated,” Mridula told The Outdoor Journal.

Disappointed with the bureaucracy, a handful of them gathered 100,000 Nepalese Rupees to procure rice, lentils and biscuits and left for villages in the Harisiddhi area of Lalitpur district. Food for Relief has an active Facebook page and was started from a broken house in Kathmandu. They are neither registered under any official name, nor licensed to provide aid in disaster-stricken areas. But Mridula and her friends are getting the job done.

The lack of a common platform led different relief groups to reach Sindhupalchowk (the quake epicentre) separately where many villagers leapt at the volunteers to snatch food and other supplies. “It seemed that a lot of other groups had gotten together the same way, to help the quake victims, but none of us coordinated with each other, because of which all nearby villages were receiving supplies repeatedly by two or more groups, and there were other villages that were receiving no supplies,“ says Mridula. Amid such confusion, quakemaps was rather simple to use; you register your group name and mark the areas you are helping on a map. Their relief efforts have sped up over the past few weeks.

In light of such damage and local heroic uprisings, the broken infrastructure of Nepal has found worldwide attention. Aid through government organizations and established international NGOs hasn’t reached villages. Instead, after every aftershock, these local aid groups are sending out trucks with supplies trying to cover as much ground as possible, even if it means hiking uphill for two hours.

The economic losses post the Nepal earthquake are estimated to be around $10bn by a United States geological survey, which is close to half of their economy. One of the poorest nations in Asia, it is landlocked by two rapidly growing economic superpowers. The villagers near the epicentre of both quakes are unaware of this lapse in infrastructure and are waiting for substantial help to rebuild their lives.

Exports are badly hit too. Nepal’s tea which normally finds itself in high-end cafes of Europe has no means of leaving the country. Tea plantations and other livestock are buried below the cracked earth. The villages that were least affected are also going through a period of turmoil due to lack of basic resources.

Food for Relief is also setting up temporary schools for the children of demolished villages. Mridula describes, “The one thing that most villagers in Dhading district complained about was the schools and houses. They had no roof over their head and had nowhere to leave their children while they went to work. So we got in touch with UNICEF and an architect friend who helped us design a Temporary Learning Center (TLC), with minimalistic materials.”

Nepal has a deep rooted connection to westerners. Its rebuilding is not just an effort from within the local community but is also proving to be a worldwide collaboration of sorts. Adventurers of all kinds who are drawn to the mountains of Nepal have volunteered to bring relief to the people. An Indian photographer informed The Outdoor Journal of his efforts to bring extremely effective and simple water filters to the victims of the quake and asked to remain anonymous. The Nepalese government is under scrutiny for its broken aid system. Mridula and her friends do not care about this vilification. They only want to get food and tarps to people, many of whom are still sleeping under the open skies, hungry and cold.