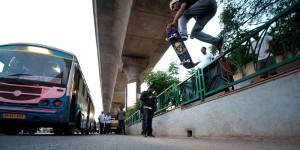 Ollies to Flips – Bangalore sees it all on Go Skateboarding Day

The international event witnessed its third edition in a row in India and lured over 100 skateboarders to show tricks, talent and engage with the ‘sick’ crowd.

As many as 120 skateboarders from different corners of the country got together to exchange tricks and styles in what was a highly energised event.

Go Skateboarding Day goes back to 2004. It was started by the International Association of Skateboard Companies (IASC) as an effort to make skateboarding an accessible sport by holding events across major cities of the world on one particular day. The day was chosen as 21 June. The name mostly comes from ‘No Skateboarding’ street signs that compel boarders to change it to ‘Go Skateboarding.’

In its third year in India, the event has seen a steady rise in popularity. “We saw 120 skaters this time, out of which 84 chose to participate in competitive events. We started out with 20 boarders back in 2012. This is huge progress for us and for the sport’ said Purnabodh, the promoter of HolyStoked Collective.

The idea behind the event was a  ‘celebration of skateboarding.’ Competitions such as Speed Challenge, Best Trick and Game of Skate (that involves 3-4 participants to keep performing tricks till one of them is the last one standing)  got the audience screaming and wanting more. The day ended with a showcase of a compilation of videos of skateboarders cruising around cities on boards.

Atita Verghese, one of the few women skateboarding instructors in India who is based in Bangalore, told The Outdoor Journal, “The best part about the event was that boarders from the whole country got together at one place. In Bangalore, we are a group of about ten people who regularly skate together. I had no idea there were so many like us! We exchanged many tricks. The atmosphere was charged up, such is the nature of the sport. It was great fun”

A skateboarder for the past year-and-half, her passion for the sport erupted from a passion for surfing. Three months of surfing in Goa got her hooked to the sport and she missed it sorely in the concrete jungle of Bangalore. Skateboarding was taken up as an alternative. Once started, there was no looking back. Today, the sport is her life.

Another avid boarder Abhishek said that the sport strikes a special cord amongst the underprivileged children of the city. ‘They have a focused interest in it, perhaps because they don’t have anything else. Skate parks would give a tremendous boost to the sport.’

In the meantime, the folks at HolyStoked are already psyched about next year. “It falls on a Sunday next year! It’s going to be bigger and brighter than ever before!,” said an excited Purnabodh.