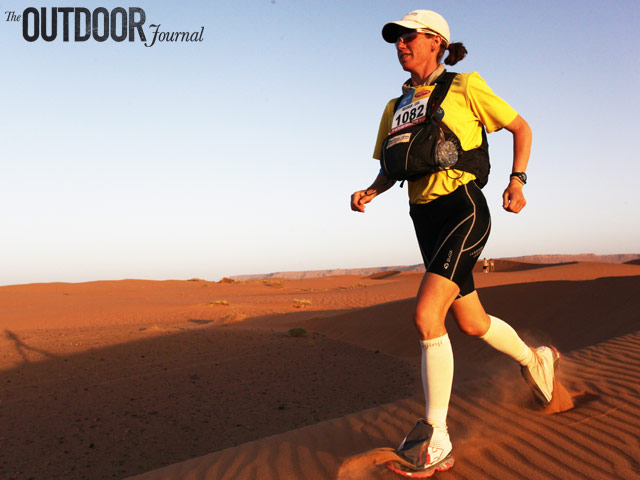 Q&A with Meghan Hicks, the first woman to cross the finish line at MDS, 2013

Perseverance is key. Meghan Hicks secured her first victory in the Marathon des Sables, four years after her first participation.

Female winner and 17th overall, her time 24h42’01, is the best a woman has finished the Marathon des Sables in its modern version. MDS officials witnessed her performing a few jumps for joy on crossing the finish line. This tiny, beautiful American woman gave an incredible performance and is a great advisor for the runner in you. Here’s what Meghan has to say about the heat and her belief that anyone can run this ultra marathon.

The Journal: Can you name a few things that were difficult for you during this race and explain why they were hard?
Meghan Hicks: The most difficult variable of the 2013 Marathon des Sables for me was the heat. It was moderately hot for the first three stages, but Stages 4 and 5 were much hotter. On those days, I had to modify my pace and effort to that which was sustainable in the heat. I live in Utah where it’s winter right up until the race starts, so I don’t get great, regular opportunities to train in the heat. I did the best I could with my heat preparations, including a trip to a race in Arkansas where temperatures were in the 70’s Fahrenheit. I also trained for the heat by sitting in a sauna. Finally, I travelled to the Sahara Desert early so that I could acclimate in-person to the desert’s conditions. All of this made me the best-prepared I’ve been for the heat in my four times racing the Marathon des Sables. But, nonetheless, the heat made racing fast difficult.
The Journal: Is there anything that was supposed to be very difficult, that you thought or heard would be hard, that you handled well? Can you explain why?
Meghan Hicks: I was most excited by my body’s ability to handle the volume of miles that is the MdS. It’s 150 miles of racing in a week! My body and mind held up so well this year to the rigors of day-in, day-out racing. I attribute this to good training. I trained specifically for the MdS for about six months, and this included some high-volume weeks that approached the volume of the race itself. By the time the race came around, my body was ready to tolerate the mileage load.
Another challenge of the MdS that my body and mind handled well this year was caloric deprivation. Since this is a race of self-sufficiency, you can only eat the food that’s in your pack, and there aren’t an equivalent amount of calories in your pack to that which you burn by running so many miles. It would be impossible to carry adequate calories and still be competitive! I was so impressed by my body and mind’s ability to run hungry and to still function at a high level on too-few calories. I don’t really know why my body put up with this challenge so well this year, perhaps having done the race three times prior my body “remembered” what it was all about? I’m grateful that it did!
The Journal: What would you say to someone who wants to do this race? Would you recommend it? What advice would you give?
Meghan Hicks: First of all, I’d say congrats on undertaking one of the greatest running challenges there is! And, I’d also say, welcome to the land of crazies! 😉 In all seriousness, for as difficult as the MdS is, I believe that it’s doable for any person with good health who is willing to put in the training and racing effort. There’s no way to do this race off the couch, as you can with a 10k or a half marathon or, for genetically gifted folks, a marathon. You have to train and train hard. But I believe almost everyone can do it.
My biggest piece of advice for folks who are just committing to the process of training and racing the MdS are the following: -Get your family and friends behind your endeavour. This is huge, and you need a strong support network behind you.
-Take the training seriously. Commit to 10 or more hours of training every week, and even more in the couple of months before the race.
-Take the gear preparations just as seriously as the training. Since this is a race of self-sufficiency, what’s in your bag and on your person becomes your literal lifeline for the week. You have to love and love using everything that’s in there. Test backpacks until you find the right one. Practice sleeping on the ground in your sleeping bag to make sure it’s right for you. Test all the food you’re going to carry while you’re running and in your home. Practice makes perfect with your gear, for certain.
-And finally, go all in. Commit to the endeavour mentally, physically, and spiritually. For most people this is a once-in-a-lifetime race, so put your best foot forward.

The Journal: What about self-sufficiency and privacy for a week, was it harder because you’re a woman? Did you feel women were treated differently?
Meghan Hicks: I have almost no negative issues to report about being a woman at the MdS. In fact, I feel like, as a woman at the front of the pack, the men around me put me on a pedestal. I had men that wanted to run next to me to help me keep my pace, men who would wave me ahead if we came to a narrow passage for just one person to fit through, and other moments like these. All positive experiences!
I think self-sufficiency is a challenge for everyone, regardless of gender. I have been wilderness backpacking since I was 18, so I have a lot of experience with living out of a pack of self-sufficiency. Thus, I’d say it was less uncomfortable for me than many people.
The last thing that I’d add about this is that the people of Tent #58 (my tent) were wonderful. We were three women and five men and we all treated each other so well. Having a caring, optimistic group of people to spend the week with–regardless of gender–helped to “make” the week from an interpersonal perspective.
The Journal: Can you name a few running races that you have done and some that you haven’t done that you like very much?
Meghan Hicks: Another stage race that I really enjoy here in the United States is the TransRockies Run. It’s a six-day stage race, something like 110 miles. But it’s not a race of self-sufficiency. The race administration feeds you loads of food for all meals; there are aid stations; and the race transports your duffel bag from each race’s starting line to finish line so you have clean clothes every day. I liken it to summer camp for grown-ups! I’ve done this race once and sure look forward to doing it again someday.
I have the dream of travelling to Bhutan, ever since I read a non-fiction narrative about a Western woman travelling there back when I was in college. I just learned last week that there is some sort of multi-day stage race there now, maybe 200 kilometres in length? I haven’t done any research on it but let’s just say it has the potential of becoming a dream race!
Image © MDS 2013
Place: Morocco