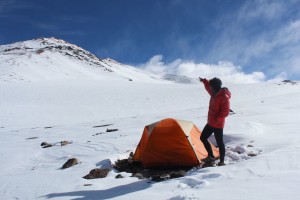 At 40 his achievements were as tall as the summits he scaled.

The first Indian to climb the seven highest summits of seven continents, ten of the Andes’ highest peaks, most of Latin America’s highest, five of the seven volcanic summits and more; Malli Mastan Babu pursued mountaineering with fervour.

As is the sport’s nature, he was always raring to venture beyond well-trodden paths to more mystical frontiers. Malli exemplified boundless energy. He lived globally, climbed vertically & dreamt exponentially. His quest for more challenging adventures eventually took him to a precipice of danger from where we could not retrieve him in time, despite best international efforts. We hope his soul is in a better place now, with no visa or permit restraints, free to explore a limitless cosmos.

The Himalaya fascinated him – the Sagarmatha with its towering cousins – Lhotse, Makalu and the aesthetic Ama Dablam. The love affair started in Harsil, where he trained for his high altitude climbs. His search for Himalayan experiences took him to Char Dhams; the mighty Gangotri and Yamnotri glaciers, Badri and Kedar, searching for the origins of Alaknanda, Mandakini, Bhagirathi, Yamuna and Saraswati.

Alongside grit and determination, he was endowed with an exceptionally inquisitive and scientific temperament. His knowledge of Himalayan flora was noteworthy. He would document, in appreciable detail, every flower he came across on his trips – observe their characteristics, quiz locals about associated folklore, research for information on them and even go to the extent of asking botanists if these species were already discovered by somebody else.

Once, the librarian of IMF (Indian Mountaineering Federation) Delhi, puzzled by his name, asked Babu whether he was a Hindu or Muslim. I was busy pouring over some New Zealand alpine journal in another corner and pretended not to listen, but the answer would remain in my memory forever. “My father was benefactor of a Dargah next to our home; hence the middle name Mastan and Malli is my family name. However I respect all religions, though I never visit their places of worship. Bhagwan to man mein hai”

Away from the maze of religion, caste, race, ethnicity, he lived in a world which breathed oxygen, drank water and ate food to survive, and wore clothes to protect the body from heat and cold. Life was obviously simple in his cosmos. Once visiting a Hanuman temple, he asked me “How does one pray here?’ I looked at him bemusedly & thought “You chase them in their abode. Temples are for those who are still miles away from God.”

In September 2008, sponsored by Samsung India, he undertook a high altitude walk from the Everest region (Solu Khumbu) to the Kanchenjunga region, with an intention to cross as many high passes (above 5000m/18000ft) as possible between these big peaks. He walked 1500 km from Everest Base Camp to Yuksom, largely solo.  He crossed Ice Col and Sherpani Col, which were probably the highest passes in the entire Himalayas, considering that Cols were not included as passes. He was the only Indian to cross Rathong La alone on foot. The route he took was unconventional in the history of the Kanchenjunga circuit.

Children brought out the best in him. Their innocence resonated with his lack of malice. I remember him planning to take all his nephews and nieces on a year-long trip to the Himalayas. “What would happen to their school?” I exclaimed. “Aparna, they’ll learn much more in Himalayas than they would in their one year of schooling.” he retorted angrily; point taken.

Quick tempered and large hearted, Babu lived in the moment, earning enough only for the next expedition. His cost for the expeditions he led would barely cover the expenses; he would sometimes share his mountaineering gear with his team. Babu worshipped his gear- the alpine jackets, the crampons, the ice axe, the harness, spirit lamp for melting ice and last but not the least his ‘tent’. And how he loved to show them off! The lowest point in his Everest story was the Lukla airport incident, where he lost his gear due to the carelessness of the airline and cried as he would for the loss of a loved one. It was no wonder they didn’t abandon him in his last moments during the wild snowstorm.  His mountaineering gear were his best friend(s) indeed!

When not exploring the Himalayas, he would be flirting with his other love – the Andes. The seat of Incan civilisation, Latin America beckoned him. His humble nature and mountaineering exploits had won him many friends from there. The Andes were, for him, an unexplored terrain then.

After Zafco decided to sponsor his South American exploits, there was no holding him back. He had already done the Torres Del Paine Grand Circuit in Chile & Machu Picchu in Peru, not to mention Mt Aconcagua in 2006 as part of his seven summits venture. Now he was all ready to explore the highest peaks of all South American Countries and the ten highest peaks of Andes. He went ahead to complete the highest peaks of all South American countries – Aconcagua (Argentina), Ojos del Salados (Chile), Huascaran (Peru), Sajama (Bolivia), Chimborazo (Ecuador), Cristobal Colon (Colombia), Bolivia (Venezuela), Roraima (Guyana), Juliana Hill (Surinam), Cerro Leon (Paraguay) and Cerro Catedral (Uruguay) – except Pico De Neblina in Brazil. He was the first Asian to do so. The geographical location of Neblina in the middle of Amazon basin and the tedious web of permits required to go there kept him from fulfilling this dream.

He managed to scale the mightiest ten of Andes however, before succumbing to their charms on Cerre Trez, on 24th March, while climbing down from the summit, in his tent 800 mts below. Malli Mastan Babu was discovered peacefully asleep in his sleeping bag, wearing his favourite jacket in his favorite tent, buried deep in snow amongst the mountains he loved. The Himalayas nurtured him, the Andes retained him. The Himalayas lost a beloved child to the Andes. A great life lived well and a death that left a void in our hearts and the world of mountaineering!

“There are two times of great happiness;

When you are haunted by a dream and

When you realize it, between the two

There’s lot of uncertainty, a strong urge to let it all drop!!

BUT YOU MUST FOLLOW YOUR DREAM TO THE END!!

Aparna Gupta is a Consultant Ophthalmologist at Max healthcare, Delhi & Gurgaon with specialty in Medical Retina. She had met Malli Mastan Babu through their common love for Himalayas. She has climbed Mt Kosciusko, the highest peak of Australia. She has done few smaller treks in Himalayas too.